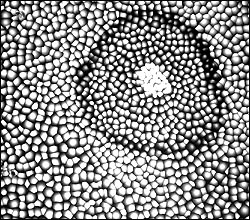 Taking a tripthrough Ross Bleckner's slick new paintings is one fantastic voyage. They get under the skin, literally. The 14 works on view at Vaknin Schwartz this month are layered studies of cells as they might be seen under a microscope or diagrammed for scientific illustration.

Gorgeous and scary, the largest paintings are 60 inches square while the smallest square off at 18 inches. Names like "Characteristic," "Protein" and "Bonding Pattern" reveal their biological nature. Bleckner's compositions are only slightly nuanced repetitions; endless off-color cells align themselves in infinite rows, separate into strands and submit to magnification. In fact, overlapping shapes that resemble cell walls are interrupted with occasional round-edged close-ups of cells as if seen in cross section. Sometimes, rough brushwork peeks through breaks in the walls. Chains of cells, like beaded necklaces, intertwine and overlay the bubbled surface. The effect is three-dimensional.

On opening night at Vaknin Schwartz, some viewers felt queasy, while others could not get close enough to the almost maddening intricacies of Bleckner's oeuvre. There's a visible tension in the paintings that threatens to overwhelm. Their content is as fascinating as it is repelling. Unsettling colors - sickly green and sulfurous yellow, burnt red, filmy white and frothy gray - don't help. In a dreamlike fashion, they evoke the inner body, the core of its genesis and demise.

Technically, the paintings are a marvel. The urge is to deconstruct each one. The viewer can't help but try to figure out how Bleckner achieves such photo-realist illusions. He creates the small orbs by air-brushing dots of paint into smooth round spots, creating round shapes with glowing, almost transparent centers and dark edges. In a labor intensive process, he generates obsessive clusters that cover the canvas edge-to-edge. Seemingly at random, he then breaks into those patterns with other equally dense configurations.

From across the room, the lustrous cells appear as seductive as a mesh of pearls brought up from the deepest sea. Upon closer inspection, they take on the clinical aspect of an intensifying illness; the necklaces become twisted intestines or digital renderings of unearthly molecules. Luminous and opaque, a simple matter of oil on canvas spawns vast ideas about energy and connections, about building life and breaking it down. The smaller works seem more cheerful, and like smaller doses of medicine, might be easier to take in. At the same time, their composition feels more contrived. It's as if on a larger scale the artist's concept has room to develop more profound metaphoric qualities.

Fay Gold has a concurrent show of eight recent Bleckner prints. They illustrate the same preoccupation with a structured surface, though his color aquatints are pale and lifeless compared to the dynamic visions at Vaknin Schwartz. "Antibody Diversity" and "Dome" have the most in common with images on view in South Buckhead. The first looks like a field of red-eyed fish eggs, the second makes the same zygotic impression in beige and brown tints.

Bleckner has 25 years of international exhibition history, his principal showcase being New York's Mary Boone Gallery. The 51-year-old painter was honored with a mid-career retrospective at the NYC Guggenheim in 1995. His patterned style has proved trendy enough to shape itself into a bottle of Absolut.

Fifteen years ago, he was one of the first artists to professionally acknowledge the sorrow and loss of the AIDS epidemic. Earlier images of luminescent Victorian objects - urns, birds, flowers and candelabras - established a sense of memento mori in Bleckner's work. Figuration has segued to these fascinating biological abstractions. Where Bleckner peels back the skin, there may be a fetishistic effect; by exposing the depth of our inner fragility, the artist conjures up an unexpected notion of immortality.

But will the real dairy queen please stand up? | more...

Coded Language at City Gallery Chastain defies the notion that graffiti writers just scribble on public property. Linh Ho-Carter, the international show's organizer, includes sculpture, paintings, drawings and projections along with an entire bus stop to prove her point. Behind the twisted letters, acronyms and symbols, she says, is a coded visual language that has left its stamp on fine art.... | more...
Search for more by Cathy Byrd
[Admin link: Cell-abration]