Musicians gather to help a friend in need. 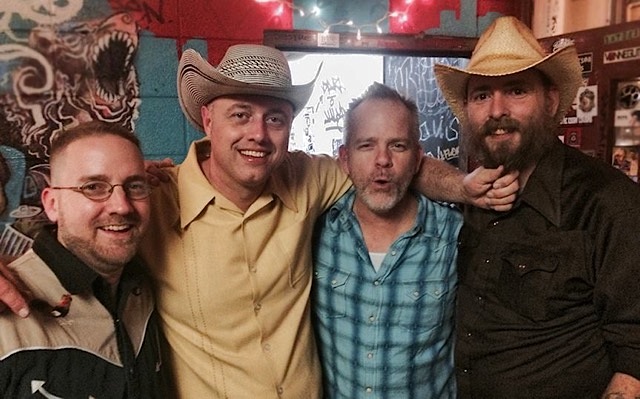 Matt Spaugh (from left), Deke Dickerson, Jay Murphree, Cletis Reid.
Photo credit: Photo by Megan Westcott
“He’s one of those guys you wish existed in every city in the USA, the kind who really helps unite people and create a ‘scene,’” says Deke Dickerson, talking about his friend, Greg Germani. “I know I speak for many when I say, I would do anything for Greg.”

This Saturday (January 16) at the Star Bar Dickerson will headline an all-star lineup of musicians in a benefit concert for the Greg Germani Trust (GGT). In June 2014 Germani was riding his bicycle when an irate motorist intentionally ran into him, causing severe injuries including brain trauma. In October 2015, the perpetrator, Joseph Alan Lewis, pled guilty to multiple charges and was sentenced to 15 years in prison. The GGT was established to help the 51-year-old former video editor pay for medical and rehabilitation expenses.

In 2011, Germani produced a concert by Dickerson at Kavarna in Oakhurst. The show served as an introduction for many to Dickerson’s firebrand sound, which blends elements from surf, jazz, country, swing, jump blues, and garage rock. A guitar prodigy, Dickerson has been performing professionally since he was 13 years old. His first band as a leader, Untamed Youth, which lasted from 1987-1993, was a cult favorite among retro-rockers. These days he regularly tours the U.S. and Europe with the Ecco-Fonics.

Last year a benefit concert at the Star Bar featuring Dickerson also served as a tribute to country music legend Ray Price, one of Germani’s favorite artists. Unfortunately, the show’s benefactor was unable to attend the event owing to complications related to his recovery. This time around, Germani is planning on being in the audience, cheering on his friend. “I remember, sometime around 1998, running across this album at the Book Nook that looked like it was inspired by West Coast hot rod and surf stuff,” Germani says. “Although I had never heard of Deke Dickerson, I bought the album, and it just nailed me.” 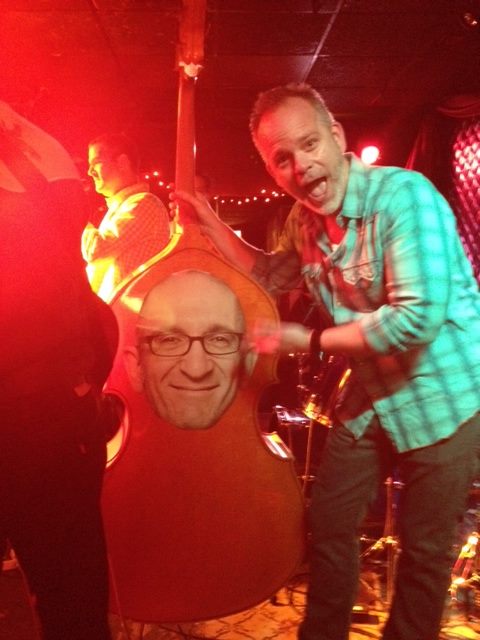 Jay Murphree (benefit producer/promoter) holding bass imprinted with Greg Germani's face
Photo credit: Photo by Caroline Hull Engel
Saturday’s concert features performances by a number of musicians from the 2015 benefit including Slim Chance & the Convicts and Caroline & the Ramblers. Also on the bill are Rodeo Twister, which includes Jay Murphree, producer/promoter of the Germani benefit, on bass, as well as local rockabilly superstars the Blacktop Rockets. “In the 18 months since Greg's injury, great things have happened including his steady cognitive recovery and the gradual, progressive return of his wit and insight,” says CL contributor James Kelly  aka Slim Chance, who speaks with more authority on the subject than most. In addition to being an accomplished singer-songwriter, Kelly is a professional behavioral psychologist.

Asked to describe Caroline & the Ramblers, Germani replied without hesitation, “Old school rockabilly presence.” Led by Caroline Hull Engel, whose singing recalls the classic style of Brenda Lee and Wanda Jackson, the Ramblers are stalwart veterans of Atlanta’s Redneck Underground scene. “When bad things happen to good people you want to do whatever you can to make things better, even in small ways,” says Hull Engel. “So many people have done this for Greg since he was hurt, even complete strangers who heard about what happened to Greg and donated to the GoFundMe site. That’s the good that has come out of all of this.”

PLUS: Between sets Julea Thomerson will be spinning selections from her massive collection of classic country and rockabilly vinyl. The redoubtable Ted Weldon (Truckadelic, Ghost Riders Car Club, and Bad Friend) serves as the evening’s emcee.

If you can't make it out the show but would like to contribute to Germani's cause, head over to GoFundMe to make a donation.

NOTE: Music starts promptly at 8 p.m. Dickerson is playing at 10 p.m. so Germani can catch his set.