KING brings all shades of black to Atlanta 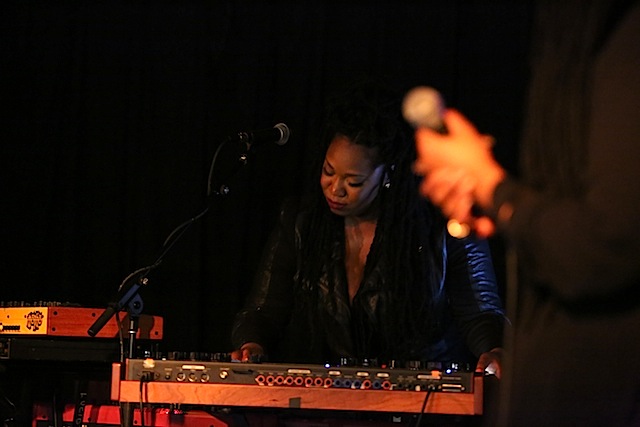 The last time R&B trio KING played Atlanta it was October 2014, and they performed for a spaced-out, half-filled, but completely engaged crowd at the the Loft — the mid-sized performance space (650 capacity) at the Center Stage complex. The turnout was impressive seeing as how the group had only released a three-song EP, 2011’s The Story, and two singles, “Mister Chameleon” and “In The Meantime.”


So when it was announced that their Feb. 29 return would take place downstairs at Vinyl, the smallest room in the building (300 capacity), it felt like a case of managing expectations. According to promoter Richard Dunn, the 2014 show was supposed to be at Vinyl, but the room wasn't available. “Sometimes as a promoter you just take a risk to advance the culture,” Dunn says of the decision to book the show at the Loft.

A lot has changed since the last time KING came to town. Most notably, the group released a full-length debut, We Are King, to rave reviews and social media celebration. Also, word spread that Prince co-signed them, all the while streaming services and Youtube algorithms are introducing their sound to new ears. Monday night’s show at Vinyl sold out weeks beforehand, forcing it to be moved back upstairs to the Loft, and even those extra tickets sold out before the night of the show. Needless to say, space was at a premium — you had to really think about just how badly you wanted that drink. 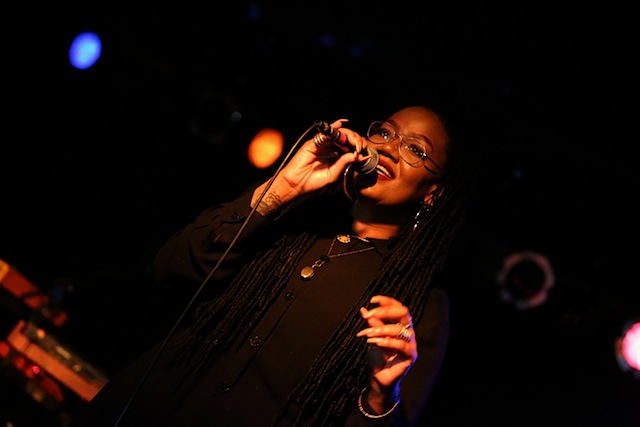 Amber Strother of KING.
Photo credit: Photo by Brandon English
DJ Salah Ananse set the mood for the waiting crowd by spinning a combination of his own blends (he has an Erykah Badu “Bag Lady” remix that is fire) as well as favorites from OutKast, Bernard Wright, Angela Winbush, and Pharcyde. At times the crowd moved as if they were waiting for permission to dance, but by the time he dropped the needle on BBD’s “Poison” everybody said eff it and briefly turned it into a party, making some people forget that it was now 9 p.m. and that they had been standing since the doors opened at 7 p.m.

At 9:15 p.m. Jamal Ahmed of WCLK greeted the crowd and officially introduced KING onto the stage. Co-lead vocalist Anita Bias appeared first and was followed by twin sisters Paris and Amber Strother. Dressed in all black, the trio blended in with the stage curtains, making it almost impossible to see them. When they opened with the celestial “Supernatural,” and asked that the light be turned down to give a “moody vibe,” you got the sense that they might prefer not being seen as much as they are heard. As the lights dimmed they flowed into their new album’s intro track “The Right One” and then into “In The Meantime.” It’s at this point that people who are new to KING truly start to recognize their talent, especially that of Paris, who produces all of their multi-layered, 8-bit video game-inspired tracks, and replays all of them on stage with her mini-studio setup of three keyboards, two synthesizers, and a laptop computer. Anita’s mezzo-soprano paired with Amber’s soothing soprano (and the long nails she’s sporting) remind you of the synergy between Taj and Coko of SWV. But where Sisters With Voices often worked to make their vocals keep up with whatever R&B/hip-pop production was handed to them, KING creates a consistent energy where every song sounds as though it comes from the same heavenly place. Sisters With Vibes maybe? 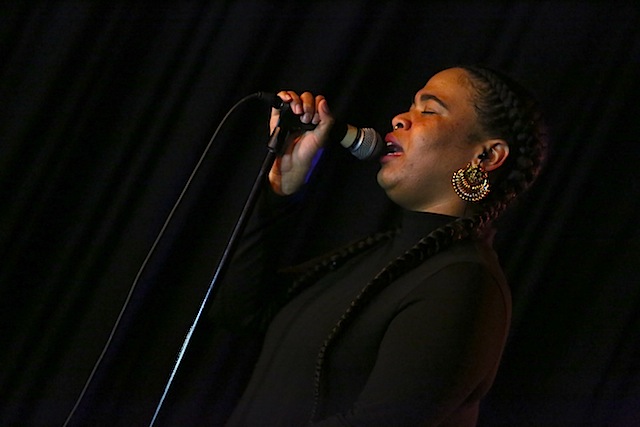 Anita Bias of KING
Photo credit: Photo by Brandon English
This is none more evident than when they go into “Love Song” — best described as a song made up entirely of favorite parts — which gets amplified and stretched out when performed live. When KING follows with their lyrical trip around the world “Red Eye” every other pair of eyes in the building are closed as a sea of heads sway like ocean waves. The meditative mood in the room is broken momentarily with a mandatory performance of their uptempo (at least for their standards) Muhammad Ali-inspired single “The Greatest,” prompting KING to do something they haven’t done all night and rarely do period, take the mics off the stand and move. The finger snaps turned into two-steps when they rolled into “The Story” with KING pleasantly surprised to see that the crowd knew the song word-for-word and even sang the ad libs. They promptly returned the mics to the stand, go back into formation to perform fan favorite and perhaps second most recognizable song, “Hey.”

KING’s lack of movement isn’t a hindrance to the show: Not dancing around or pacing the stage allows you to get lost in the music and catch every note. It’s one of those rare instances where you actually want to listen with your eyes closed so you won’t miss a thing.

When the cowbell opening for “Mister Chameleon” creeps through the speakers concertgoers react with somber joy because this is an indication that the show is drawing to a close. KING has already performed 95 percent of their young catalog. If it’s any consolation, they ended the tune by blending to a rendition of DeBarge’s “All This Love.”

“We will play one more for you, Atlanta,” Paris said, with fans in the crowd counting on their fingers, suggesting that they go ahead and perform the two or three remaining songs they have out. They closed the show with “Oh Please” and exited stage right. A handful of people made their way to the bar to close their tabs while others, most of whom spent the night Facetiming their kids (this was a school night after all), scooted to the exit to beat the crowd. Unfortunately, they missed an encore performance of “Carry On.”

Deliberate or not, KING’s choice of all black wardrobe on an all black stage with dim lights and little to no movement resulted in people keeping their smartphones in their pockets instead of in the air trying to get footage to be collected and posted to the black hole that is the Internet. Their sound alone provided all the colors you needed: rich black, warm black, soul black, lovely black.

Tonight, Jame$ spearheads a benefit for the families of the 147 victims of the Garissa University shootings | more...
Search for more by Maurice Garland
[Admin link: KING brings all shades of black to Atlanta]