A rapid-fire display of feverish manifestations of subjects pushing against the walls of Spaldingâ€™s mind, with the only mechanism of release being Emily.

? ?? ?? ?
? Bowie to Ziggy , Prince to Love Symbol #2, Shock G to Humpty Hump, Puff Daddy to P. Diddy — to just Diddy. OK, most of these have nothing in common. The point is musicians across the board seek change at some point in their career. Sometimes it’s simply a change of moniker while others embrace fugue-like alter egos. Child prodigy and all around musically inclined badass Esperanza Spalding shot for the latter with the creation of Emily. Inspired by learning of the musical duality of Ginger Baker while watching the documentary Beware Mr. Baker, Spalding put together a full tour around her new persona: Emily's D+Evolution Tour. ? 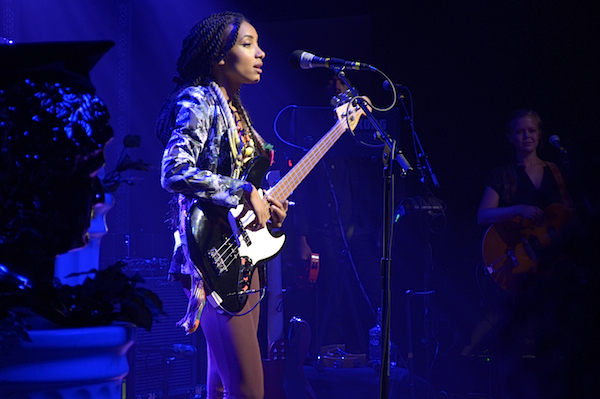 ? With a chaotic energy that was somewhat reminiscent of New York City’s no wave acts of the late 1970s and early ’80s, Emily retained Spalding’s musical heft while leaving room for some fray around the edges. Part live concert and part performance theater, Emily touched on various social and political issues at such a breakneck pace that they may have been lost on many in the crowd at Terminal West. Everyone in the room stood in awe of the transformation unfolding on stage. In one brief yet poignant moment, she fell to her knees in a prayer-like position after breaking glasses strewn atop her piano. As she knelt, a sample of the recent church bell memorial held in Charleston, Emanuel AME played bringing sharp gravitas to the character’s actions. Vignettes such as this happened between songs, and came across as feverish manifestations of subjects pushing against the walls of Spalding’s mind, with the only mechanism of release being Emily.
? ?? ??

'That was way more violent than I expected,' says some guy | more...

image-1
The Easter Bunny came bearing gifts in the form of New York City rappers Le1f and Junglepussy. Khalif Diouf, better known as Le1f, brought the New York QTPOC scene's energy to Purgatory at Masquerade on March 27. Riding the wave with him was fellow rapper Junglepussy. Despite the rain and Easter Sunday slot, both sets exuded copious amounts of energy in the somewhat cramped but...

image-1
? The Atlanta Contemporary Art Center held its annual Art Party on Sat., Aug. 29. Living up to it's name, the Atlanta Contemporary provided a night filled with artistic festivities for its patrons. From the opening of exhibitions from John Rippenhoff, Marlon Mullen, and Aleksandra Domanovic to the eleven studio artists in residence, the grounds were rife with a myriad of art forms and...

image-1
? Marking the one-year anniversary of the inaugural march led by It's Bigger Than You in the days following Michael Brown's fatal shooting by Ferguson police, Atlanta activists affiliated with the Black Lives Matter movement returned Tuesday evening to the CNN Center where over 5,000 people gathered last year. Despite numbers well below that and persistent rain similar to the downpour...