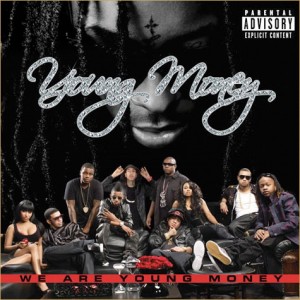 Photo credit:
Young Money has been on a roll recently. An imprint of Cash Money helmed by Lil Wayne, it is home to two of 2009's biggest breakout stars, Drake and Nicki Minaj. Indeed, it's hard to turn on the radio recently without hearing a Young Money song, particularly the cutesy bubblegum-rap track "Bedrock" &#150; you know, the one with the Fred Flintstone pun in the chorus. But that doesn't mean the compilation CD was a good idea. Rather, it seems largely composed of tracks that weren't good enough for the artists' regular studio albums, and it's clogged with all the Young Money artists you probably aren't interested in hearing (Mack Maine, Tyga and Gudda Gudda, for example). Not all of the tracks are as offensive as "Wife Beater" &#150; which talks about a girl who will have sex anywhere except a bed that smells like urine &#150; but very few deserve a second listen. (Young Money/Cash Money/Universal) 2 out of 5 stars.

Featuring alums such as Saul Williams, CX KiDTRONiK, and Sol Messiah, no one in Atlanta’s emerging, early ’90s hip-hop scene was stranger than K.I.N. | more...

An evening with Travis Porter Article

Root beer, weed, and a quest for girls with an exploding Atlanta rap trio | more...

The Atlanta MC remains as unpredictable as ever with two opposing releases | more...

The most hated man in Southern rap Article