Why are Chris Brown fans emailing me?

Could it be because his music isn't hitting as hard as he hit Rihanna... 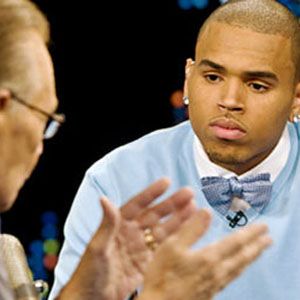 I pity the fool who wears baby blue
Photo credit:

Earlier this week, Chris Brown issued a plea to his fans in an attempt to stir them to action on his behalf. Since pleading guilty to felony assault against his former pop star dimepiece Rihanna, he fears he's being blackballed by the industry and even has sucky sales of his recently released album Graffiti to prove it. So he took his beef straight to SayNow.com (his main outlet since deleting his Twitter account in a related huff last December) where he left an audio message begging fans to hit up their local radio stations and request his music:

"Hey, what's up, y'all? CB. I ain't never really did this but right now I'm just calling ya'll, I need all of my fans' help," he said in the 90-second clip. "I need all the fans that I have, I need y'all's help. It's crazy because a lot of radio stations ... some radio stations aren't playing my records. They're not being that supportive and I wouldn't expect them to.

Apparently his desperation is working, based on this email I received in my inbox Friday, which begins:

To Whom It May Concern,

The intent of this letter is to request that Chris Brown's music be allowed airplay on your station. For over a year we, his fans, have been requesting that songs from his catalog, both old and new, be played to no avail. In the initial stages we understood, considering the severity of his actions, why there would be reluctance to do so. Now over a year removed, enough is enough.