The Atlanta blues legend, and a bygone era, come alive in Hand Me My Travelin&#146; Shoes 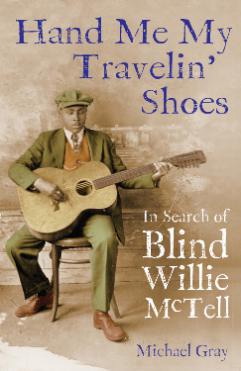 ''I want eight crapshooters for my pallbearers, let 'em all be dressed down in black.-
I want nine men going to the graveyard, but only eight mens coming back.-

I want a gang of gamblers gathered around my coffin side, with a crooked card printed on my hearse.-

Don't say that crapshooters will never grieve over me, my life's been a doggone curse.-

Take a walk over to the corner of Luckie and Cone streets in downtown Atlanta and you won't find much today, just a parking lot, a parking garage and a convenience store. Back in 1940, when the Tabernacle down on Luckie Street was still the Third Baptist Church, John and Ruby Lomax were staying at the Robert Fulton Hotel, a hulking mass of red brick that towered over that street corner.-

Late one afternoon during their stay, Ruby noticed a blind black man playing a 12-string for change in front of a Pig'n Whistle barbecue stand on Ponce de Leon Avenue. He accepted their invitation to record a few songs for the Library of Congress archive, on the condition that he was paid a dollar plus cab fare. In his notes about the day, Lomax would write, &-;He sang some interesting blues. His guitar picking was excellent. ... He shuffled away from me across a busy street in the downtown district. I watched him until he was out of sight."-