Kosha Dillz and Freeway speak in tongues before 2011 A3C 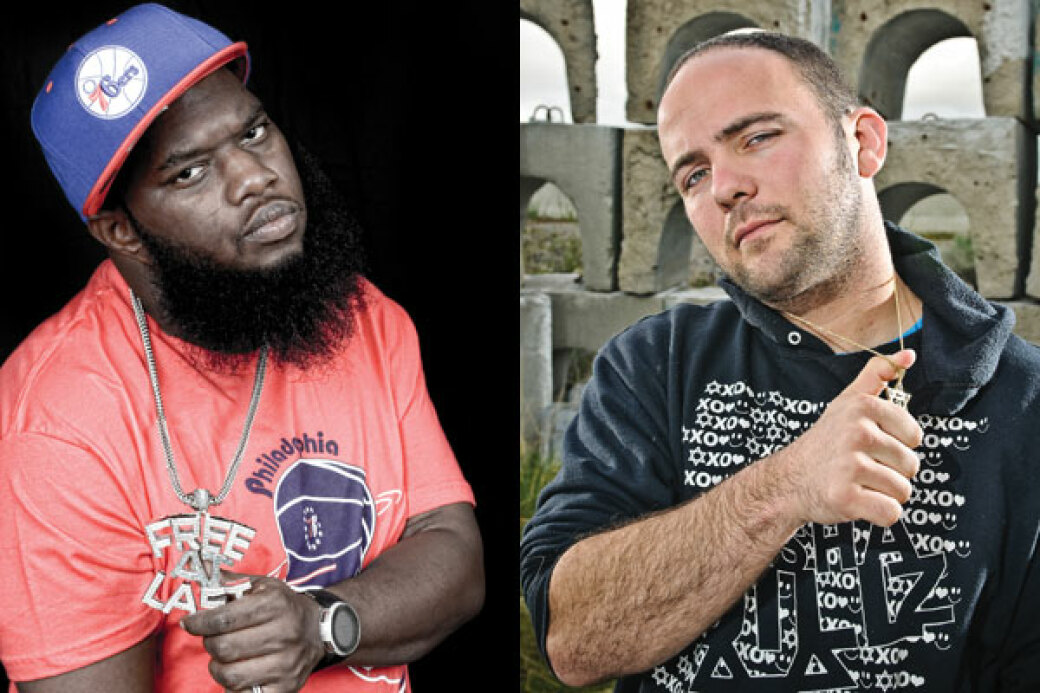 New Jersey native Kosha Dillz would never be mistaken for the guy Mos Def was referring to when he rapped the now infamous line, "some tall Israeli is running this rap shit." Despite his Jewish wink-of-a-stage name, Dillz is not that tall — nor is he cashing in on hip-hop on the same plane as former Island/Def Jam exec Lyor Cohen. Not yet, anyway. The closest the unsigned MC with a penchant for rhyming in Hebrew has probably come to seeing a fat a$$ check is when he toured the Czech Republic last year — get it, Czech Republic — with former Roc-A-Fella rapper and practicing Muslim Freeway. Though the two come from opposite sides of the religious aisle, they were both there to represent hip-hop — as they will again on the HipHopDX stage at this year's A3C Fest. With the cross-cultural connect already established, CL eavesdropped on a conversation between them in preview of the show.

Kosha Dillz: I actually had grown up listening to you when I was about 18, 19 and it's kinda funny because as a teen, I had come from more of a street life, too. We were listening to Freeway, doing whatever we were doing in New Brunswick, N.J., and then I had gone away and done time. Then I came out as Kosha Dillz and I became this sort of Jewish rapper, kind of iconic figure for Jewish kids. And Freeway, you've been one of the more successful rappers that converted to Islam and traveled to Mecca. And now we're doing a show together and having this interview. So I just think that's kinda ill.
Freeway: Yeah, definitely.

KD: What made you make the switch from your old life to your current life?
F: Well, you know I'm from Philadelphia and it's basically a predominantly Islamic community that I grew up in. My mother was Christian and my father was in something kind of like a cult — it was this thing called the Nation of Alkebulan. It was this church where we talked about the betterment of black people, you know. So I was raised on that. Basically my father was the man of the household, so we had to do what he said to do. But once I was old enough, I explored religion I realized Islam is the religion for me.

KD: I went to Jerusalem to learn how to Yeshiva — kinda like when you went out to Mecca and made the Hajj, Jewish kids go and study with rabbis and scholars and that's a good place for me to create a lot of cool music in Israel. Is there any place like that that you might go, like take six months off to go study?
F: I definitely have plans to go back to Saudi Arabia and perform another Umrah and a Hajj. And definitely, I'm sitting down and studying with some people.

KD: Do you think you'll record out there?
F: Oh naw, I don't think I'll be doing any recording out there. The thing that I do when I'm out there is I try to talk to the kids in that country and let them know how blessed they are in the Holy Land. 'Cause a lotta kids over there look at the things we're doing over here and think that it's better than what they're doing. When, in all actuality, it's better where they're at, 'cause they're right there in the Holy Land where the Kaaba is, they're in the land where we pray to, they're in the land where all the scholars are — whereas we have to travel 15 hours on a plane to get over there, you know what I'm sayin'?
KD: For sure.

F: Do you feel like you've got more to prove to fans who might prejudge you based on what they see?
KD: Yeah, I just don't think that Jews have had the largest success at being dope MCs. I mean, [we] had MC Serch and [we] have the Beastie Boys. I kinda have a lot of barriers, but I think persistence, commitment and perseverance is something that I want to [[[use to] prove myself. I've always been in that boat — always being doubted when I step into the arena.

F: Yeah, that's like me. When I first got in the game I was counted out. They told me wouldn't nobody want to hear a whole album of my raps cause my voice is annoying. I heard all kinds of stuff: Like I was the first rapper with a beard, young guy with this, like, weird Islam — it's a lot of stuff that I've overcome, so I feel you.
KD: I always like the odd-ball-out because I've always been the odd-ball-out. I was at Rock the Bells and RZA brought me on stage and people were backstage thinking I was like his lawyer or something. So it's always like something to prove. Do you think you would ever go and study in Israel, because the Golden Rock is out there and it's the third holiest site for Muslims out in Israel?

F: Definitely, if the opportunity presented itself.
KD: I think it would be really cool. Everyone really knows you out there because Israel's really big on that level of hip-hop. You would be the most prominent figure from hip-hop and Islam to study there, so I think that'd be a really cool bridging the gap, and positive even for Israel.
F: That's what's up, man.

KD: Well I'd love to invite you over for a Shabbat dinner or something like that when you come out to L.A. If there's anything you want me to find out for you while [I'm] in Israel, if I can help you get out there with some of the Muslim dudes — the rapper Shine's out there studying, so we could get the whole thing going on, you know.
F: Definitely, I'm open to it so we'll do it.

KD: Freeway, man, let's build. Let's try to bang out a joint and shock the world, you know.
F: Definitely.