If the quantity of distressed voicemail I've received is a fair indication, it was a shock to many when Camille's, the longtime Italian spot on North Highland, closed a few weeks ago. Although the restaurant's New York-style Italian fare was long ago surpassed by more authentic venues like Sotto Sotto and La Tavola, Camille's had a loyal following.

Familiarity doesn't always breed contempt. Neighborhood restaurants over time develop loyal clientele for many reasons. Good food at fair prices is the main draw, of course, but we will often forgive relative mediocrity if the restaurant is comfortable, nearby and maintains a staff that recognizes us.

This week's column is devoted to some informal neighborhood restaurants in town. A good starting place is one that has become almost the quintessential intown funky cafe. When Delia Champion and Michelle Speert opened The Flying Biscuit Cafe (1655 McLendon Ave., 404-687-8888) with help from Emily Saliers of the Indigo Girls in 1993, they had no idea what a sensation they'd cause. Chef April Moon's homey cuisine was an overnight hit and, from day one, people from all over the city drove to Candler Park to wait an hour or longer for a table in the small restaurant.

Eventually, it expanded to include a larger dining room and a retail counter where you can buy the namesake biscuits, cat-head size things that demand lots of butter and the restaurant's signature apple butter. The Biscuit also expanded about a year ago to a second location in Midtown at the corner of Piedmont Avenue and 10th Street. In short, it's become quite a success story.

Breakfast, which is served all day, beginning at 7 a.m. at both locations, is many people's favorite meal here. I used to especially like the organic oatmeal pancakes ($5.95). The lunch and dinner menu retains the restaurant's opening favorites, well under $10 — the black bean love cakes and the turkey meatloaf with "pudge" (potatoes mashed with sundried tomatoes and olive oil), for example.

In my case, I confess to a bit of contempt bred by familiarity when faced with these dishes. It's been almost 10 years since the restaurant opened and these dishes have become stale despite their nostalgic appeal. I'd love to see some more contemporary dishes added to the regular menu. In the meantime, better to turn your attention at dinnertime to the specials and changing menu of entrees and appetizers.

I confess, though, that some of those seem crude and oddly overwrought. Fried green tomatoes have the right acidic taste and texture but appear to have been made far ahead. Their tepid breading has retreated from the tomatoes. The goat cheese garnish is nice, but the "cashew-jalapeno relish" is a true case of gilding the lily. The lily gets even more rococo gilding when it's a sliced, toasted baguette with warmed brie ($6.95). The bread is garnished with a very slimy apricot and peach salsa — and I mean a lot of it — with toasted pecans added. A plain baguette with brie would have been much more welcome.

Entrees were better. In fact, Wayne's red snapper, encrusted in parmesan and spiked with a soy vinaigrette, was very good ($12.95). A special, it was served with sauteed red peppers and snow peas. My dish, the filet of flounder, was the menu's second-most-expensive at $15.95 and possibly the most bizarre. The fish was seared with black sesame seeds, a nice touch, then placed over black rice, which I love. Unfortunately, the rice was in turn deposited on a pile of "Asian slaw" that tasted for all the world like my mother's overly oniony coleslaw. Every subtle flavor was lost to the onions.

My favorite spot for Middle Eastern food has long been Olive Bistro in Little Five Points. The Israeli owner blends his native cuisine with accents from throughout the Mediterranean to produce a piquant and garlicky menu. Now the restaurant has opened a second location with the same name at 650 Ponce de Leon Ave. in Midtown, in the shopping center containing Home Depot and Borders.

The new location is a bare-bones operation. Like the Little Five Points restaurant, the main decorative feature is the glass case housing the day's collection of goodies, including absolutely the city's best hummus and falafel. I also love the grilled eggplant.

Last week, I selected a special — veal ravioli — that was absolutely primo. The veal was roughly ground so that it retained its flavor and the tender ravioli were served under a light but spicy tomato sauce. Incredibly, the dish was under $7. I also ordered a side of the white bean salad. Here, the tender beans are anointed in olive oil and combined with sundried tomatoes, parsley and an excess of garlic that will make you unwilling to talk to anyone except on the phone.

My big complaint about Olive Bistro is that it's very difficult to construct a mezze platter of the more interesting items here. Ordering dishes a la carte doesn't just get pricey; it brings far too much food to the table. My minor complaint is the Styrofoam plates and plastic forks.

"Um, what did you think of the place?" one asked.

"Over the top," the friend said.

Yes, I found the ambience — which basically amounts to bridge graffiti, dubious rock and heavy drinkers — a bit much, but the food was better than I expected. Wayne's hamburger of Black Angus beef topped with bacon, mushrooms and blue cheese was a huge, messy, delicious bargain at $7.50.

And you should definitely save yourself money by ordering a burger instead of the menu's most expensive item, a 10-ounce N.Y. strip steak ($14.50). The steak was good enough, though raw in the middle, and garnished with some decent onion rings. The side salad with its plastic container of blue cheese dressing was a grim affair, but more palatable than the baked potato that tasted as if it had been submerged in water.

Service is bipolar — one moment charming and the next mumbling and indifferent.

Andy Alikbaksh has turned Cabbagetown's Carroll Street Cafe (208 Carroll St., 404-577-2700) into a good restaurant after a chaotic period of co-ownership with original owner Kim Vidal, who eventually left some months ago.

Like Alikbaksh's popular Apres Diem, the Cafe is now serving some more complex evening specials. A ribeye steak with melted brie ($17.95) and a grilled red snapper with a caper-heavy sauce ($15.95) were both excellent last week. The menu still features designer sandwiches under $10 — my fave is the Cobb — and equally inexpensive pastas. The restaurant's bar is now in full swing too, with a very cozy seating area where you can sip a cocktail or a coffee and read.

Apres Diem itself (Midtown Promenade, 931 Monroe Drive, 404-872-3333) is doing a huge business. Many of us feared that when Alikbaksh closed his original venue, the funky Cafe Diem, and moved to a shopping center, the crowd would change. It may be a bit more diverse than the poets and black-clad cigarette-puffing French students of Cafe Diem, but it's quite a bit more interesting than The Earl's.

And the food continues to mature. The same concept that operates at Carroll Street functions here — a regular menu of inexpensive salads, sandwiches and pastas, plus some pricier specials. A steak in red sauce with gorgonzola ($18.95) was the standout when I dined there last week. Wayne nibbled happily on a Caesar salad while he swilled a chain of sour-apple martinis. 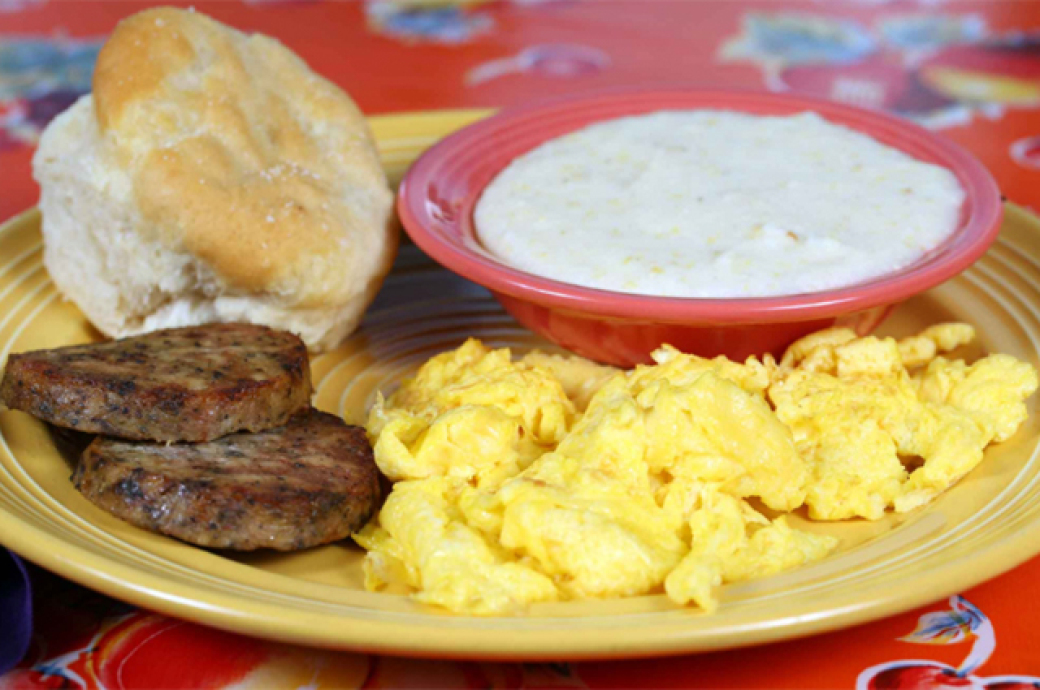 website: Serving Breakfast All Day For 20 Years Our first café opened for breakfast at about 7am one morning in 1993. Settled in a quiet neighborhood called Candler Park on the east side of Atlanta, we sold out of our signature biscuits by 11am that day.
—Read Article