Food - The Turnip Truck brings the farm to the table

Let's just get this out of the way now: Yes, the Turnip Truck, Atlanta's go-to independent distributor of local, farm-fresh produce, does at times actually carry turnips. And no, owner Michael Schenck did not recently fall off of it.

After working in kitchens for most of his life, the 34-year-old Greensboro, N.C., native began sourcing and delivering local produce to top Atlanta restaurants nearly five years ago.

"Back then, you'd see the same farmers at the same places all the time," Schenck says, "I'd go the markets at 3 p.m. on a Saturday, and the farmers had been there since 6 a.m., sweating and tired. I thought, 'What if we could consolidate some of that energy?'"

At a time when Atlanta chefs were beginning to request more local product than ever before — far more than what was being offered by large distributors — Schenck also noticed that the way in which farmers got their products to restaurants was often a logistical nightmare. Farmers at big, conventional operations weren't keen on leaving their fields unattended to face Atlanta traffic one delivery at a time. That's when Schenck discovered his niche. He quickly set out to become the local guy's middleman, allowing farmers to focus on tending to their bounty and providing chefs with enough local produce to sustain Atlanta's burgeoning farm-to-table dining scene.

These days, it's not unusual to see one of Schenck's three trucks parked outside the likes of Miller Union, Empire State South, Cakes & Ale, Rathbun's, Leon's Full Service, and many others. Local chefs say several have failed at what Schenck seems to do effortlessly — combining meaningful relationships in the kitchen and in the field with running an local-only produce delivery service in Atlanta. Playing at this level, Schenck's Turnip Truck is the only game in town.

"Michael is a liaison and can seek out things that I specifically want grown for me, or grown in a certain way," Smith says. "He is really good at giving feedback to farmers, and finding new farms that aren't big enough to come to the city."

Schenck sources from certified organic or certified naturally grown farms in the area, along with a few that are working toward certification, such as Crystal Organics (Turnip Truck's largest vegetable supplier), Serenbe Farms, Love is Love Farm at Gaia Gardens, and Le Tre Lune in Douglasville. This time of year, Schenck's three trucks are loaded with veggies: baby carrots, radishes, and kale. He's got strawberries and chard. Some ramps and wild mushrooms, too.

"Nicolas Donck from Crystal Organics dropped off 50 cases this morning," Schenck says during our interview. "About 20 of those cases are already on their way out to chefs around town." Most conventional produce will linger for one to two weeks in coolers and on trucks before seeing a chef's hands. "Our method is fresher tastes better and helps retain nutrient content."

Farmers like Justin Dansby at Serenbe Farms trust Schenck. "It's hard to let your product go into another set of hands. Michael keeps Serenbe's name with it," Dansby says. He notes an unfortunately common practice called "green washing," where big distributors will buy a small quantity from a local farm, then mix it with conventional product and verbally brand it as the indie farmer's.

Schenck is committed to local food — not as an idea, but as a way of life. He, Dansby, and Smith all individually acknowledged how easy it is for commercial distributors to slap on the buzzword without anything to back it up. The Turnip Truck offers transparency and the opportunity to build relationships and support local businesses. Schenck has recently expanded deliveries from intown Atlanta to East Cobb, Roswell, and Athens. A partnership with Georgia Organics aimed at reaching school food service programs and establishing a retail CSA is also in the works.

For Schenck, it's all about taking back our food supply. "These are people that we actually know who are doing it the right way, growing in sustainable, organic methods," Schenck said. He's an advocate for more awareness and more accountability surrounding food. "I'm a father of three kids under the age of 4. To have a safe food supply, we literally need to know who is growing it and where it's coming from." 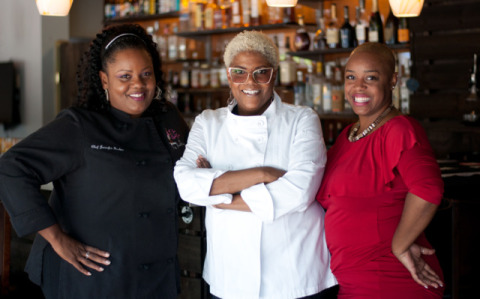 Talking 'slow food' and 'slow tech' with the Decatur native | more...
Search for more by Osayi Endolyn
[Admin link: Food - The Turnip Truck brings the farm to the table]