Vegan cheese, when mentioned to a typical omnivore, is treated with the same reluctance any buzzed bar patron may assign an O'Douls. Regardless, giving up cheese remains as a popular sticking point for many attempting a vegan lifestyle. Founder and head honcho of local vegan cheese company Pure Abundance Allison Wunderland knows that. "Before I was vegan I was such a fan of cheese and loved all different types of cheese," she says, five years deep into her own veganism. "I really started by looking for ethical ways to consume animal products, and I couldn't find any way I was comfortable with. Because even if they grow up happy, they die miserably, and I just wasn't OK with that."

Before going vegan, Wunderland had minimal experience making food for herself, save total mastery over the artful grilled cheese (it is an art). She started with a vegan taco food truck business at Atlanta Underground Market then returned to her minimal roots, experimenting with vegan cheese recipes at home. "Once I started making the cheese and my first couple of attempts were really good, I decided to follow that path," she says. It took the acquisition of a Vitamix, her sweet kitchen space behind O4W Pizza (where Pure Abundance is featured on the vegan pie, among other various metro Atlanta spots), and a lot of trial and error. A little over two years ago Pure Abundance went legit, run by Wunderland and two part-time kitchen employees. Currently the small company peddles two kinds of cheese: Luna, a white vegan cheese named after the moon; and Pan, the vegan spin on goat cheese that sets in log form, rolled in herbs. The former is saltier and works well in slabs, the latter is easier to spread with a pleasant twang quality. 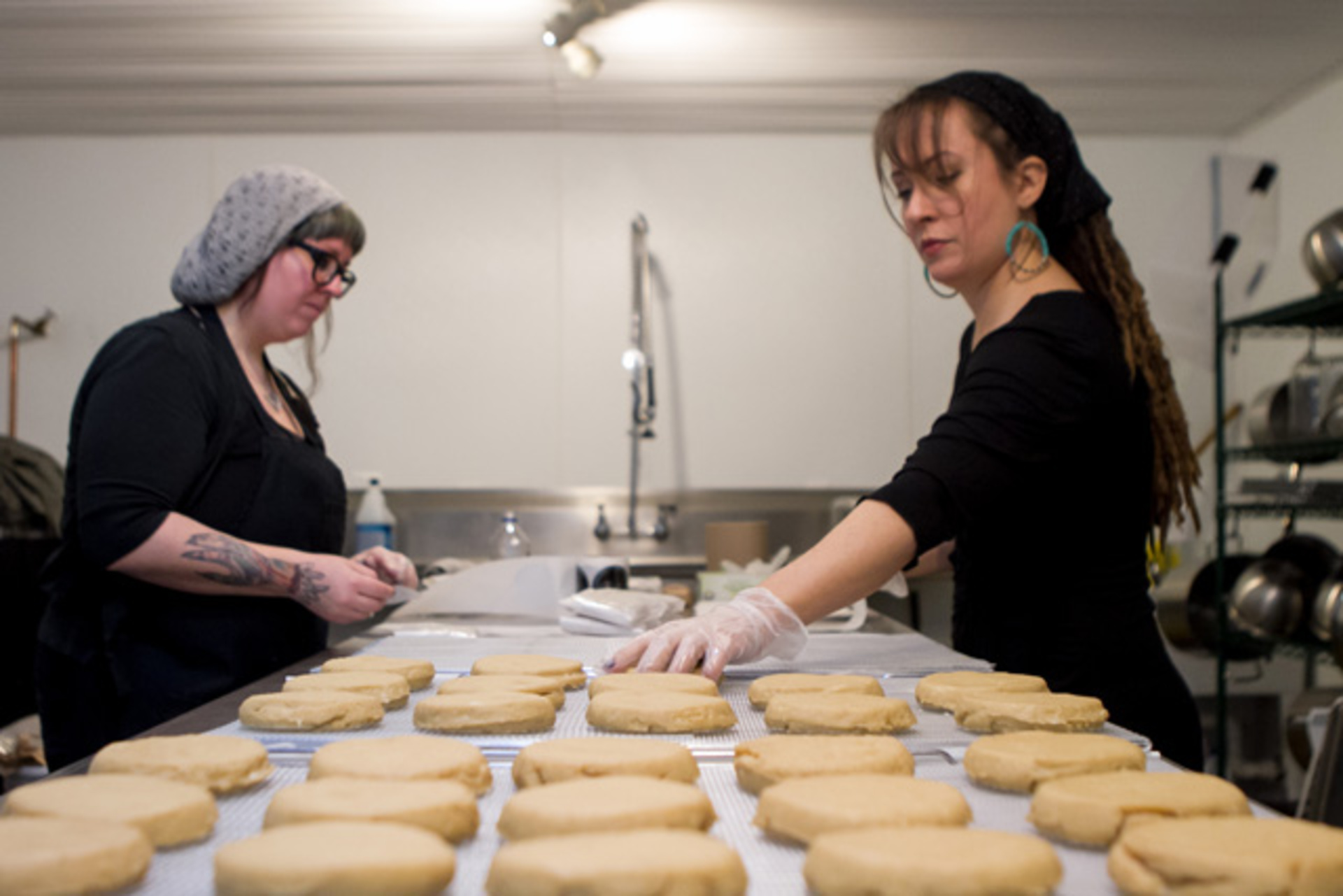 Even though "vegan cheese" may sound as whack as "nonalcoholic beer," the process, as Wunderland explains, is fairly similar to dairy cheese. A culture of sprouted buckwheat and water sits for a few days until it creates an active probiotic liquid. That gets blended with cashews and "other supporting ingredients" — a phrase she leaves ambiguous but the cheeses' intensely tangy taste and the kitchen's plentiful white vinegar jugs help clarify — then into the "cheese cave." Ancient cheesemakers aged dairy cheese in underground caves, leading to modern practices in cellars. In the Pure Abundance kitchen, Wunderland's boyfriend helped design and modify three refrigerators with fans and adapters to regulate humidity; essentially crafting makeshift cheese caves. Once very lightly chilling — between 55 and 65 degrees — the flavor develops.

But how does it melt? Meltability, after all, is the penultimate quality of vegan cheese. Or at least the most scrutinized and dissected aspect of nontraditional cheese. On a slice from O4W Pizza, a smattering of Pan globs are gooey but don't fully give in to the crust foundation. "For me, it was more like getting the time and temperature right to get that good flavor, which I care about a lot more than the meltability," Wunderland says. "Apparently nobody has really figured out how to make it melt the way dairy cheese does."


The melting mystery may remain, but Wunderland isn't stressed. Atlantans are still buying Pure Abundance from a handful of posts like Whole Foods and restaurants including Wrecking Bar. "People here are just open-minded, sophisticated, into food," she says. "It's not just hamburgers and hot dogs anymore. I think people want to be up on what's the latest thing. And people are cool about paying for something that is quality, organic, artisan made."

Editor's Note: The white vinegar in the kitchen is used for cleaning only. The cheese's tangy flavor develops during the culturing and aging process.