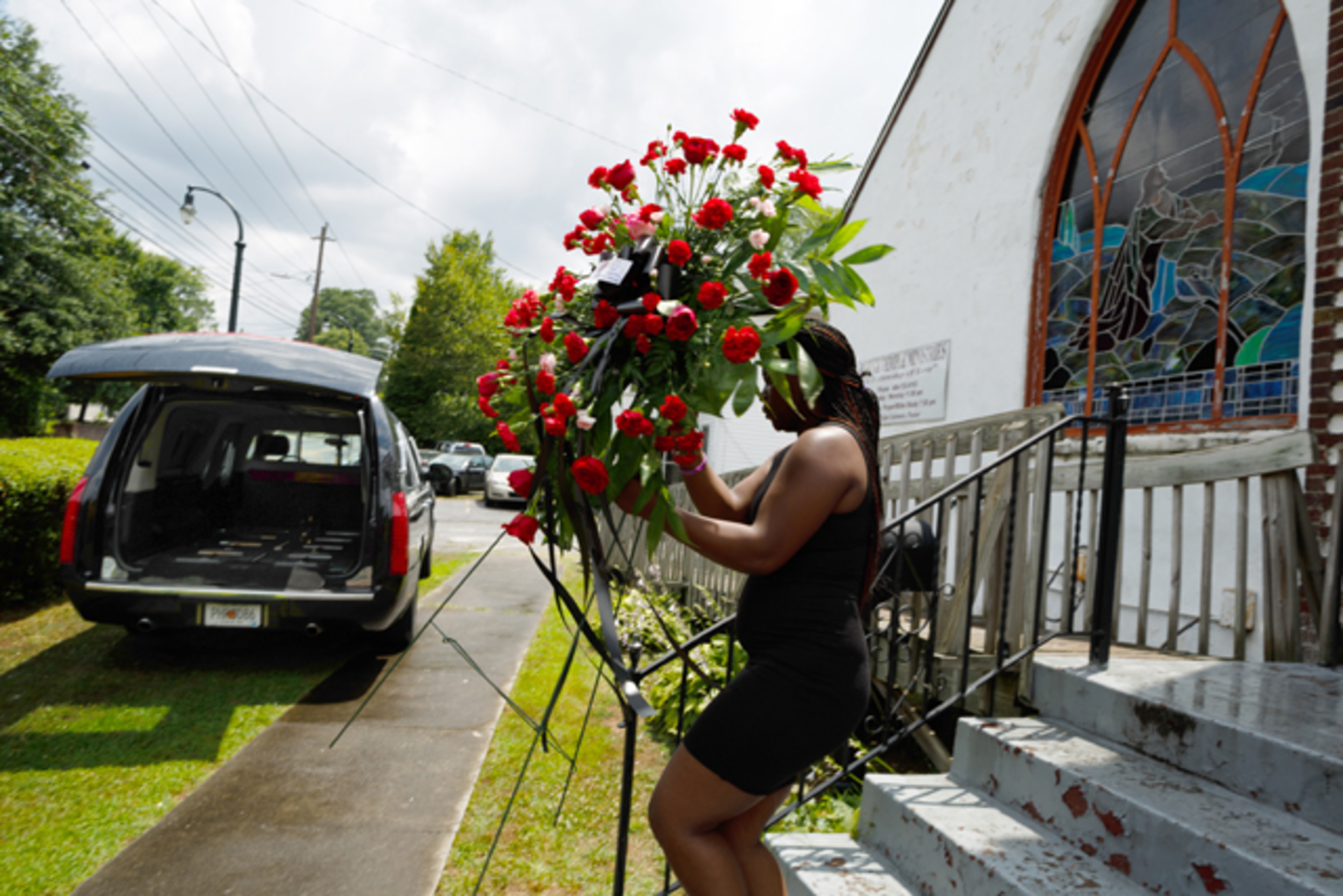 I went to the funeral for Christina Baber, 25, at Refugee Temple Ministries on the Westside on Saturday afternoon. She grew up in the English Avenue neighborhood. On Thursday, she died while sitting on her grandma’s porch in English Avenue. The Fulton County Medical Examiner's office is awaiting toxicology reports to help determine the cause of her death.

My friend, Ms. Walker, who lives in English Avenue, called me the night before the funeral and asked me for a ride to the church ceremony on Joseph E. Lowery Boulevard. I picked her up at her apartment the next day and we headed to the church. When I pulled up to drop her off, she invited me to attend the funeral service. I had not prepared to see death that day, but I knew I wanted to attend.


I met Walker during my time documenting the evolving English Avenue and Vine City neighborhoods as the new football stadium looms larger by the day. The stadium is adjacent to the Georgia Dome and Georgia World Congress Center, two structures that had a large hand in the continued decline of the cluster of historically black neighborhoods west of Downtown.

Walker talked to Baber's mother, told her about me attending the service, and offered for me to make some portraits of the family afterward. She agreed. About 50 loved ones attended. Many people cried but sang joyfully as the space filled with music. Bishop Cooper convincingly reminded the congregation that we were not there to say "goodbye," but that we will certainly "see her later." I made this photo after the service as family-members carried out floral decorations to prop up outside before the casket was carried out, placed in the hearse, and taken to be buried at Forest Hills Memorial Gardens Cemetery near College Park.

During the burial ceremony, final goodbyes were said and Baber's casket was lowered, I photographed family-members laying on and kissing the casket. In these kinds of situations I'm constantly observing if and when people notice me photographing, and adjust my distance and frequency of my shutter based on the looks I get, or don't get. At this point, I felt accepted as someone who was there to respectfully document a loss.

After the burial ceremony, I found myself back in English Avenue in Baber's parent’s living room. The house was packed with family, including eight little kids running through the maze of people's legs and folding-table legs. We all enjoyed full plates of homemade baked chicken, fried Church’s chicken, rolls, homemade mashed potatoes, carrots, and peas.

After the meal, I photographed Baber's two sisters, grandma, and mother in front of the living room mantle and sitting on the house's front stairs. As Walker and I said our goodbyes and began walking to the car, a middle-aged couple asked me who I was and what I was doing there. I explained I was there to document and Walker quickly jumped in to explain that I worked with her on telling the history of the neighborhood. They responded kindly, "we weren't sure, we thought you were a family member — you jumped right in there and no one batted an eye."

As a photographer, I approach these situations knowing full well that I am an outsider, that I have not lived the life that any of these people have, and never had a question in my mind that I would make it past the age of 25, unlike Baber. However, in every look, every word, every hug and handshake, I want to exude a sense of personal comfort and understanding in hopes of connecting — not as a photographer from another universe who is there to document another species' grief processes, but as a human spending time with other humans.

image-1
? I went to Martel Homes this past week to shoot a photo related to "Dirty South," the song from the 1995 Goodie Mob album Soul Food, on which Cool Breeze references the East Point housing project and says, essentially, that’s where he learned to cut and sell cocaine. I walked around looking for a scene that related to the lyric which, to me, was about the cultivation of power or...

image-1
? Photographs of concerts this big rarely represent the photographer’s experience. This photo is no different. For each artist that night, we were allowed to photograph two songs of each act from a weird, VIP fan-filled side-stage pit at the Georgia Dome. I usually try to photograph one opener to get a sense of where I’ll be shooting from, the light, interesting groups of fans near...