Mary Stuart Hall looks into her past in her new MINT solo show, The Topography of Text 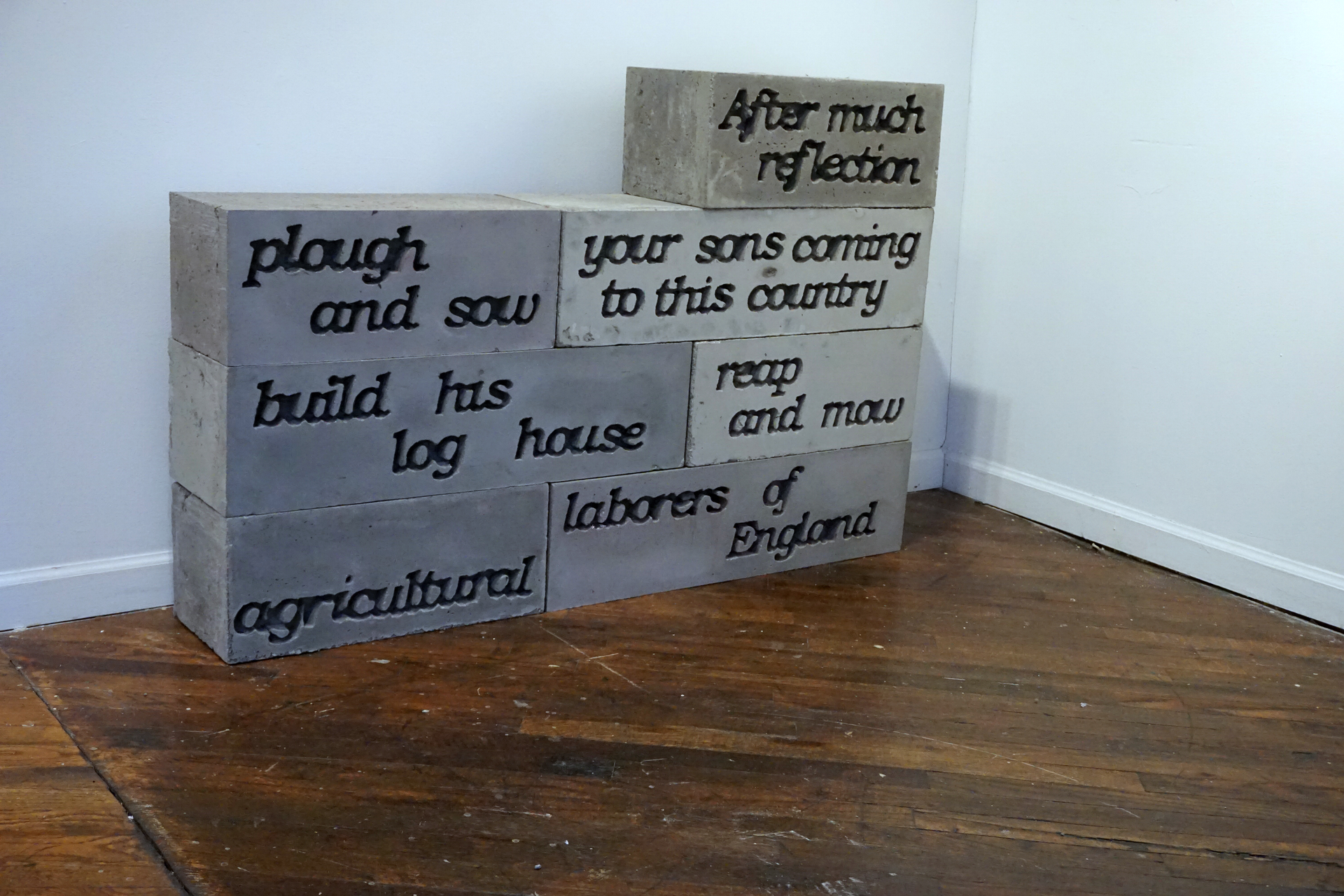 We all have vivid memories of our families, whether they were experienced firsthand or through stories told sitting on your grandmother’s lap. For Mary Stuart Hall, one of her recent family memories came in the form of a letter from 1847. By sheer luck, she found this letter from a relative as she organized things with her mother and it quickly became the inspiration for her new solo show, The Topography of Text.

“The text is from a letter written by a family member of mine,” Hall, a middle school art teacher at the Galloway School, says. “My fifth great-grandfather, I believe. Writing in 1847 back to somebody in England about why or why not you should come to the United States — it talks about the life of a farmer and what society is like. Then the political climate. That was sort of my jumping off point.”


Topography is a continuation of her piece in MINT’s 2nd Juried Exhibition, Here to Go, where she won “Best in Show.” The Here to Go piece used Braille text. The common theme? How we communicate with each other.

The Atlanta-based artist has special relationship with text as she is captivated by how we use meaning and attach them to certain words. “I'm so fascinated by how we take for granted meaning and how we assume that meaning is fixed," she says. "In our day-to-day lives, we have this idea that words mean what they mean and we give words those meanings. They don't have any meaning on their own without the interplay of communication."

This exhibition is a way for her to explore the written word by turning them into physical and tangible forms while learning more about her family through memories. “It's been a while since I've done something so personal in terms of relating to my own family history,” she says.

For Topography, Hall took four verses from the nearly 1,200-word letter and split them into four sculptures. Each sculpture, concrete blocks stacked on each other, spell out about 100 relief-printed words from the letter. “The first one gives a little context about the letter," Hall says "The next verse says where they are and the last two verses are really political. That's where it says that, ‘a conquest of Mexico will precipitate the event where the foundation is rotten, the superstructure must fail."

She says these last two verses relate to our current political environment, where refugees are immigrating to other countries and encountering rejection. “This could be right now," she says. "It is similar to the political climate right now."

The second part of her exhibition relates back to her late father, who is related to the blood tie the letter. In the exhibition, she shares old 8mm films from his life as a way to put together more memories of her past. “This is about situating my own memories of my dad and figuring out that personal history as well,” she says. Hall describes the fragile 8mm transfers as “ethereal” and “other-worldly” with an acute sense of loss. “The images of my dad are from when he was a young child," she continues. "They feel like how it feels to lose someone and how it feels to have a memory of that person.”

While she only shares small glimpses into her past, Hall is very much interested in seeing how viewers interact with the installations and put together their own story.

“Walking into the gallery, you're getting a very edited view of the letter," Hall says. "Metaphorically, I'm interested in how we situate our own selves within that story. How do you stitch together these words and make a narrative for yourself. I don't think the project is finished.”

| more...
Search for more by Muriel Vega
[Admin link: Mary Stuart Hall looks into her past in her new MINT solo show, The Topography of Text]