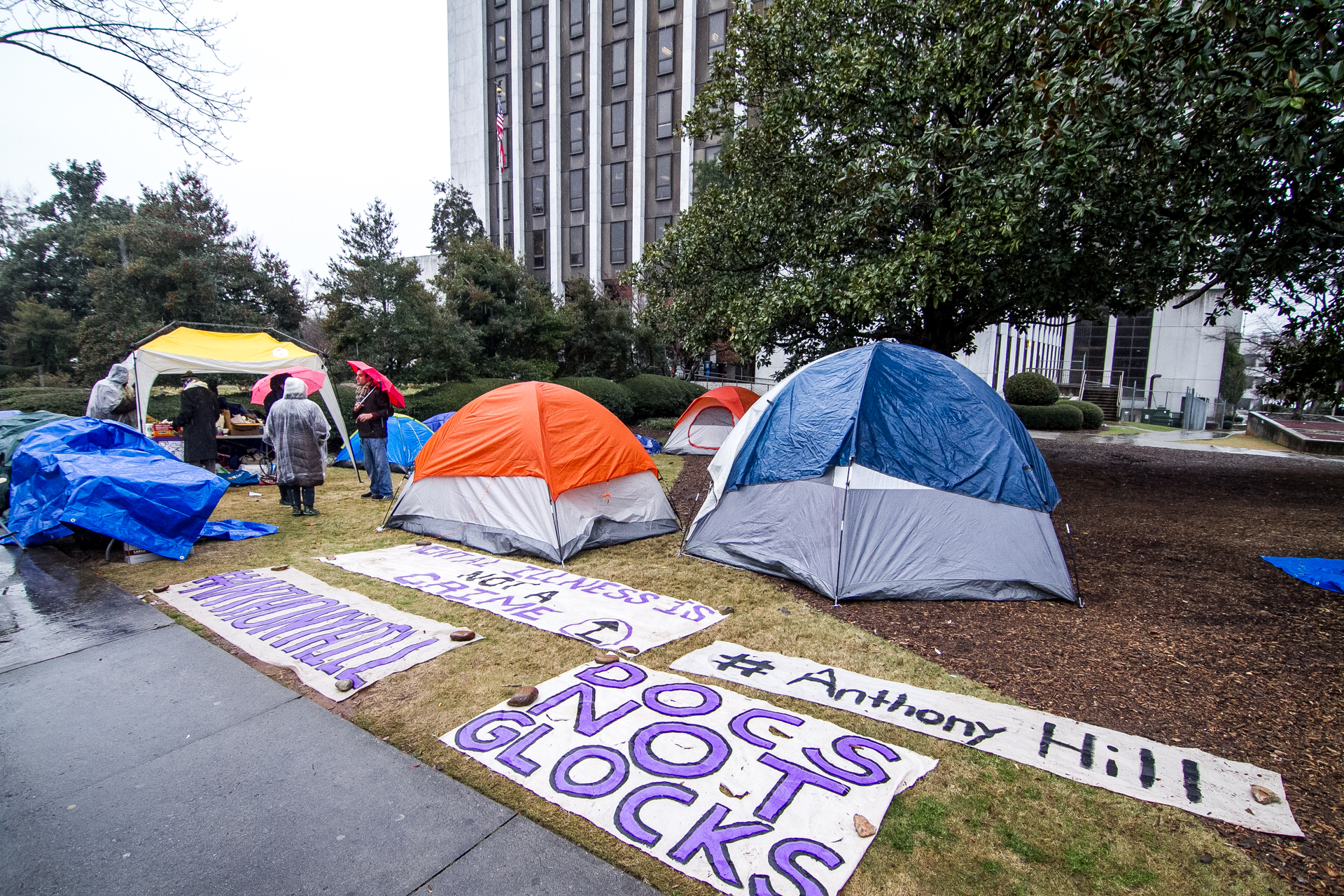 Just after 2 p.m. on Weds., Jan. 20, Jack Bishop stepped under a yellow tent planted on the lawn of the Dekalb County Courthouse. The tent — and seven others grouped around it — was the home of a protest that Bishop had learned about over the radio, while he was riding the bus between the Atlanta VA Medical Center on Clairmont Road and his home in Panthersville.

Bishop, who is 63 and served in the war in Vietnam, still walks like a soldier — shoulders back, head up. But when he saw Bridget Anderson, he slouched and his eyes began to water. He asked if she was the woman he had heard about on the radio. He said “I want to offer my condolences. I heard it on the news.”

And Bishop said, “It comes and it goes. Some of it is good, some of it is bad.” He said that recently, he had lost his therapy dog – his closest companion. “It gets worse before it gets better.”

They shook hands over a sign on the ground that said “Mental Health Units Now” and Bishop walked off in the direction of his bus.

“She seems like such a sweet woman,” he said. “And very strong.”

Anderson, a petite woman whose face is framed by bouncing curls, was the girlfriend of Anthony Hill, an unarmed black U.S. Air Force veteran who was shot by Dekalb County Police Officer Robert Olsen in Chamblee on March 9, 2015. In the foment of national attention on the deaths of unarmed black men by police, Hill’s death sparked protests, media coverage, and the convening of a grand jury that met in October to assess whether the officer who shot Hill should be tried for homicide. That jury asked for more evidence before they could reach a decision.

Today, a grand jury is meeting again in Dekalb; if they indict Hill’s shooter it would be the first time in six years that a Georgia grand jury has indicted an officer.

Through it all, Anderson has become the spokeswoman of a protest movement that seeks to reform the Dekalb County police response to mental health crises. Unlike other departments in other states, the department has no specially trained mental health unit to respond to such incidents.

Hill, who was diagnosed as suffering from bipolar disorder, was a mellow, sweet man to those who knew him; a war veteran who had returned from Afghanistan suffering from post traumatic stress and anxiety. But weeks before he was shot, Hill stopped taking a prescription medicine that he told others had made his tongue swell so much that he feared he would choke. When a neighbor called police on Hill, it was because the 26-year-old was wandering his apartment complex naked and exhibiting behavior that protestors say indicated a psychotic episode, and should have not been handled as a violent threat.

In the week before the jury would met, protestors drew attention to the lack of mental health awareness in the department and elsewhere. “Docs Not Glocks,” read a sign spread out on the lawn. On their jackets were pinned loops of purple and green ribbon – green for mental health awareness; purple, because it was Anthony Hill’s favorite color.

“Mental health touches all of us. It’s closer to all of us than we are aware,” said Rob Andrews, a protestor with Rise Up Georgia, the organization that with Anderson, organized the camp out in front of the court house in the days before the jury would convene.

On Wednesday, rain that froze before it hit the pavement didn’t bother the group; since they set up shop on Mon., Jan. 18, strangers had donated leg warmers and gloves and hats and heat pouches and, between 2:00 and 4:00p.m. on the day before the jury would meet, three different people unrelated with Rise Up Georgia stopped by to deliver trays holding cups of hot coffee.

For Anderson, Anthony Hill’s struggles with his mental health were a new experience. She had grown up in a family that dealt with a bad mood by going to church or sleeping it off.

That didn’t work for Hill, who met Anderson after he returned from fighting in Afghanistan. He took pills for anxiety. Then, while they were dating, he was diagnosed as bipolar. “That was new for me,” she said.

Before Hill, Anderson knew the term only from television — specifically, from “Degrassi,” where the character Craig was diagnosed as bipolar and, in a fit of jealousy, trashes a hotel room. It had seemed to Anderson like bipolar meant something violent. But that wasn’t Anthony. His illness came out because he was more depressive than other people; he would stay in bed, or record beats on loops for hours, sinking into his music.

“It wasn’t anything like how the media portrays it,” she said.

She learned how to be with Hill through his drops — how to feel sad for him, how to not ask him what was wrong.

“You don’t ask someone who is depressed that because they don’t know,” she said. “It really comes from nowhere. It’s in their brain.”

At the moment that she learned that he had been killed, she was driving on the highway and picked up the call. For months afterward, she could not drive on a highway – any highway.

“I was being chauffered by my friends and family,” she said.

She started seeing a therapist and was diagnosed with post-traumatic stress disorder and anxiety, the same problems that Hill suffered from, after he came home from Afghanistan. “I still like, get flashbacks,” Anderson said. “It’s real.”

The protestors around Anderson on Wednesday understood. Erin Hurley, an organizer with Rise Up Georgia, had family members affected by bipolar disorder.

“For us, for a while, it was the elephant in the room,” she said.

Learning how to talk about it and how to connect with loved ones who suffered from it helped Hurley’s family, she said. She hoped the same healing could happen if people on North McDonough Street, in Decatur, could see that Anthony Hill’s mental health wasn’t the basis for an officer to shoot him. Police “treat it as a crime because they don’t know how to respond to it,” Hurley said.

Darrick Lindsey, a protestor who wore a scarf knitted in the pattern of an American flag, understood. His stepfather suffered from post-traumatic stress disorder, Lindsey said, and would be triggered into moods. To be shot for that? Horrific.

“There’s no law that says you can’t be disabled,” said Lindsey.

But on Tuesday, a man had stopped by the tent to give his condolences to the group. He said that the Anthony Hill case had hit home for him, as he was also a veteran who also had been on new medication when he had a strange reaction. In a daze, he found himself urinating outdoors, in the breezeway of his apartment building, when police arrived with guns pointed his way. He didn’t know how he had gotten there or what he was doing; neighbors had called the police.

He told Anderson that thankfully, he “snapped out of it. He felt like he could have been shot.”

*
Bishop, the veteran who gave his condolences to Anderson, has watched as the mental-health system in place for veterans has improved since he came home from Denang in 1972. When he first returned, he would never have considered talking about his post-traumatic stress disorder with doctors at a veterans hospital; it just wasn’t done. Even those with physical ailments suffered from the care, he said. Those who did ask for mental-health therapies were “shuffled off” he said.

“I don’t care how many nightmares I had, I wouldn’t have gone,” said Bishop.

In his own family, outside of the army, he saw how civilians received better care. His mother, who suffered from depression, was hospitalized. “I was grateful then, at least in the civilian world, there was a place for her to be treated.”

But that changed in the 2000s under President George W. Bush and was pushed “two steps forward” by President Barack Obama, he said.

Now, Bishop attends weekly group therapy sessions for veterans of the war in Vietnam at the facility on Clairmont Road. Thirteen years ago, he was given a service dog who was trained to wake him from his night terrors so that his feet were firmly planted on the ground; if he was late to take medication, his dog was trained, he said, to pull him over to the medicine bottle.

“We’re getting there,” he said.

And what he said to Anderson, on the loss of Hill, he said again. “It’s gonna get worse before it gets better. It always does.”

Hearing from others who went through part of what Hill went through helps Anderson, she said. “A lot of vets say to me just to keep going. If I didn’t meet these people, I wouldn’t be out here right now. I’d stay up there, in bed, depressed.”