Chester Hopewell brings poetry to a telephone pole near you 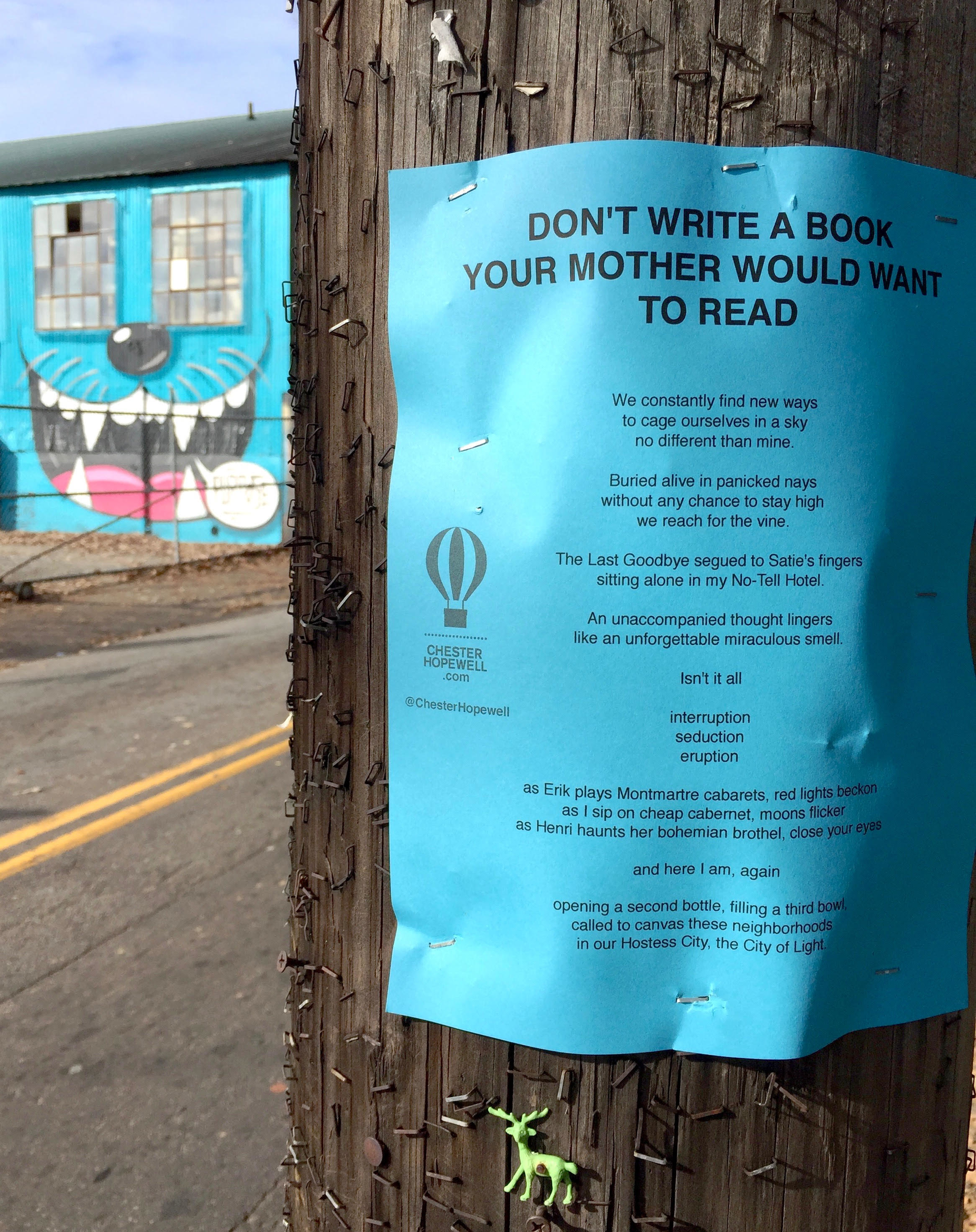 Photo credit:
If you're walking around Cabbagetown and spot a poem printed on neon color paper and stapled to a telephone pole, it's most likely the work of Chester Hopewell. Inspired by the #FAFATL movement, Hopewell started dropping his book of poems as free art about two years ago and collaborating with other artists ever since. Now, his Telephone Pole Poetry project has taken over the city. Hopewell talks to CL via email about bringing poetry to the masses and where he gets his inspiration.

When did you start making telephone pole poetry? Why telephone poles?
I started the Telephone Pole Poetry Project in 2011 while living in Savannah. I had one of those bursts of inspiration, and the words were flowing. But here's the thing with poetry in this day and age: It's hidden away in print or web journals that are mostly read by other poets. There's no reality TV show about poets (and rightfully so); there's no mass market for poems. People have to actively seek it out, and with all the entertainment options out there in the world right now, let's be honest, not many are going to make that kind of effort for poetry.

So that got me thinking: Why not present poems to people in their everyday lives? Why not make it easy for them to encounter poetry? As I thought more about how to do that, I kept coming back to telephone poles. Symbolically, they represent communication in all its various forms. Obviously, they carry wires overhead that bring Internet, cable, and telephones (does anyone have those any more though?) into our homes. And there is a certain familiarity with flyers stapled to telephone poles in every community, from searching for a lost dog to promoting an upcoming concert or yard sale. I also wanted to present the poems in a simple yet eye-catching way.


Where do you get the ideas for the poetry? What inspires you?
My ideas come from everyday life, both internal and external. A conversation, a song, a work of art, a mundane work meeting, love, sex, the looming prospect of death, past lives, the energy of nature, societal norms, passion, healing, travel, any experience. All of these things, and others, provoke feelings and emotions and thoughts, an internal dialogue. And it's in the observation of those — what they mean, what they don't — where the poems begin to take shape. I'm always taking notes on my phone to revisit — ideas, concepts, frameworks. Other times poems appear rather quickly. I let the muse do her thing.

What neighborhoods contain your poetry at the moment?
Great question. I really don't know. One of the more fascinating aspects of this project — every post is fleeting. It's cardstock and staples, rendering it more temporary than most street art. But I kind of like that (and am sometimes frustrated by it, too). Be it the weather, or a buffer, or someone wanting to take it home, there's really no telling how long a #TelePolePoem will last. One of the earliest ones in Atlanta, across from Manual's Tavern, survived for more than a year. I've posted in Candler Park, Old Fourth Ward, Inman Park, Cabbagetown, Little Five Points, East Atlanta Village, Poncey-Highland, and another highland I'd rather not mention (its neighborhood association categorizes poetry as litter). I've also brought the project to Portland and Seattle. I like to revisit Atlanta neighborhoods with new poems and find new spots for a combination of older and more recent compositions. Although the project is already five years in the making, I feel like it's just getting going.

Have you received requests for specific poems? If so, what's the weirdest one?
Luckily I have not. I say that because my poetry is very much steeped in personal experience and the worlds inside me. It's more that people, most notably my wife, inspire the work in some way.

*Those who know me are prohibited from commenting.

| more...
Search for more by Muriel Vega
[Admin link: Chester Hopewell brings poetry to a telephone pole near you]