Omnivore - Is Atlanta's story better than Tampa's Farm to Fable"?"


The food world was abuzz in April when the Tampa Bay Times ran a series titled Farm to Fable, with a headline stating, "at Tampa Bay farm-to-table restaurants, you’re being fed fiction." One aspect that made the story so notable was not just the premise of restaurants deceiving consumers, but the fact that author and Tampa Bay Times Food Critic Laura Reiley had so thoroughly researched and documented case after case after case of lies and misrepresentations by Tampa area restaurants. Anyone reading the story couldn't help but wonder, "How does my city's farm-to-table situation compare to Tampa's?"

As an Atlanta food writer and farmers market devotee, I believe that we're not anywhere near as bad as the Tampa depicted in Reiley's story. Atlanta has a thriving local/regional farm and farmers market scene. We have restaurants going above and beyond the call of duty when it comes to farm to table sourcing. We have numerous organizations making real headway in a range of food issues tied to local and sustainable practices. But even when taking all of that into account, the nagging question still remains: Are some of our restaurants selling diners a bit of fiction when it comes to their farm-to-table promises? Who better to answer that question than a roundtable of Atlanta chefs, plus the farmers themselves who work so hard to get locally grown produce and protein on the table.

Shortly after the Tampa Bay Times story came out, it just so happened that a restaurant industry group called Nosh Talks was putting on such a roundtable. The invitation promised "a panel of marriage counseling ... chefs, farmers, how they work together, and everything in between." While the two hour discussion didn't specifically touch on the Tampa story, the overwhelming takeaway was that Atlanta restaurants are in a good place and consistently improving their relationships with farmers ... but the system isn't perfect.

After the panel, I followed up with the chefs and farmers to specifically address the state of local sourcing in Atlanta restaurants, and what diners can do to be better informed. Here's what they had to say:

The chefs include Nick Leahy of Saltyard, Joey Ward of Gunshow, and Jarrett Stieber of Eat Me Speak Me. On the farmer side, Steve Whitmire of Brasstown Beef chimes in (Lauren Cox of Woodland Gardens, Charlotte Swancy of Riverview Farms, and Susan Pavlin of the Common Market Georgia were also part of the Nosh Talks roundtable), as well as Brandon Chonko of Grassroots Farms, well known for his passionate advocacy of local, sustainable poultry. 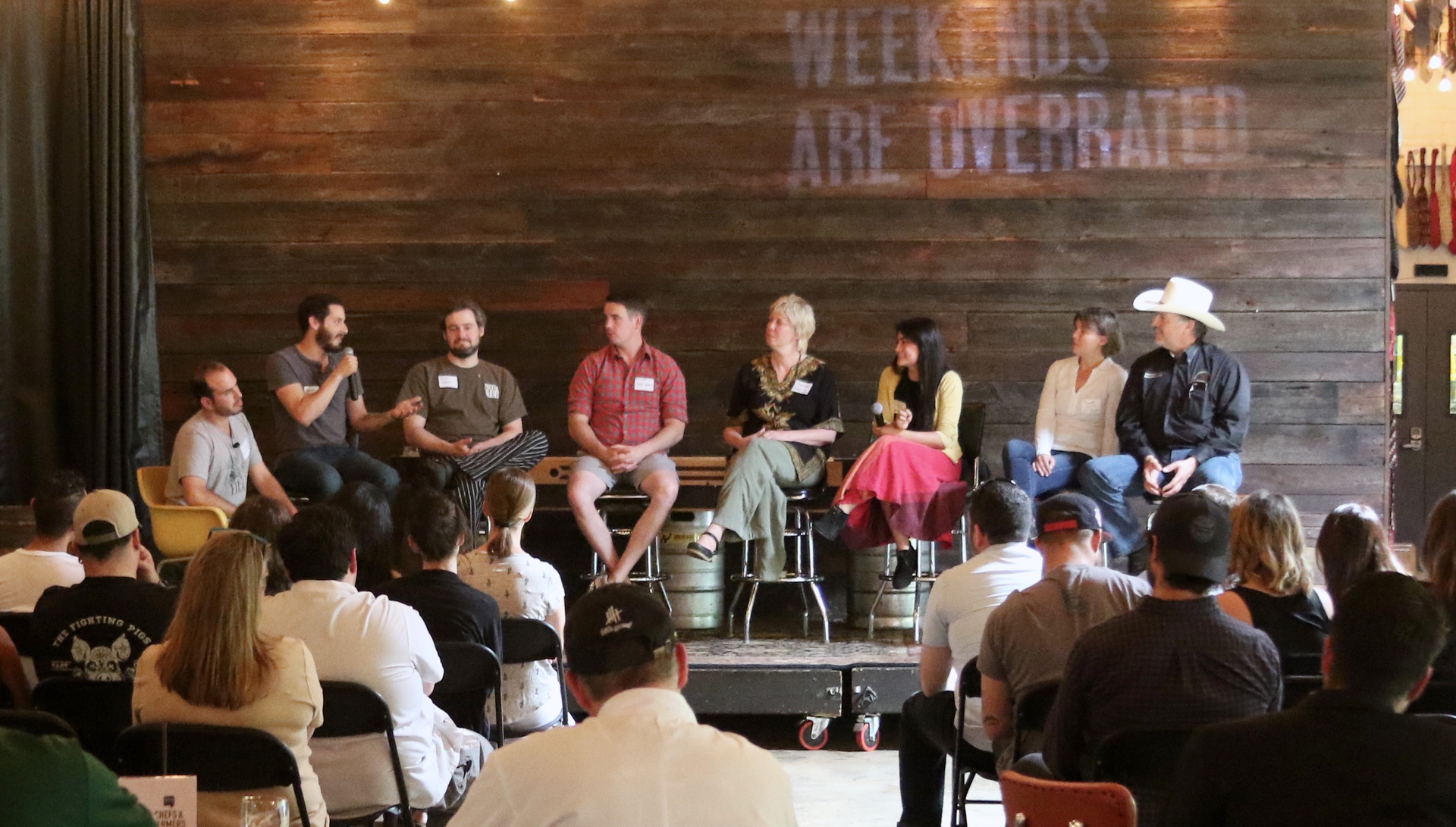 Photo credit:
Steve Whitmire:  I had not seen it (the Tampa Bay Times story); but, after reading it, I was amazed by the extent of the misrepresentations and outright lies that such a high percentage of restaurants were involved in. I think that the standalone restaurants in Atlanta have really moved quickly to the farm to table concept in a very genuine way. As a farmer, I greatly appreciate what they are doing to promote the fact that they offer locally grown items on their menus. The most effective communications, in my opinion, is word of mouth; closely followed by print journalists and bloggers applauding the chefs and establishments that truly source some or all of their produce and proteins from local farmers.
Jarrett Stieber:  The state of sourcing locally in Atlanta is both good and bad. On one hand, the access to local product is at an all time high. We have more local farmers markets going on than ever before, which is great for home cooks, and companies like Turnip Truck have done a wonderful job connecting restaurant chefs to local product that they otherwise would not normally be able to. On the other hand, the access and heightened awareness to local product has turned into an easy marketing strategy for a lot of restaurants who know that they can get away with deceiving less scrutinizing members of the dining public into believing they are sincere practitioners of a hot movement, when they really aren't (at least not to the degree they would like you to believe they are).
Brandon Chonko:  I don't think it (the use of local sourcing by Atlanta restaurants) is as far along as it appears. A lot of it is image. It's pretty tough to market local meats to a majority of restaurants. The chefs who support it fully are great, but they aren't the norm.... it's a majority who do not. Or do not as much as the public thinks.
Nick Leahy:  I had seen it (the Tampa Bay Times story)... it does point out the hypocrisy of some in our business. I think that it (Atlanta's local food scene) has improved greatly over the past few years and is continuing to do so. I think the biggest catalyst was like-minded people sharing ideas and resources. The Atlanta chef community is very internally supportive, and that led to a lot of "hey, I have a great new farm I've discovered, give them a call" conversations between chefs, as well as telling the farmers, "hey, you should go and call on xyz chef, he'd love your stuff."
On the extent of restaurants that knowingly stretch the truth on local sourcing:

Stieber:  There are (still) a lot of restaurants that are not truly committed to being locally and seasonally sustained which claim to be. Do not be deceived! For every place that sources the majority of their product from reputable places, there are infinitely more which claim to and don't. There are also some places that are given a reputation of high sourcing standards by the media and dining public just based on the pedigree of owners and managers, when they never claimed to be such establishments (which I find far less problematic than the ones who claim it and don't do it).
Joey Ward:  I'm not "in the know" when it comes to falsifying local claims. We've always sourced a great portion of our product locally, and we are too busy to keep tabs on others to see if they're being true to themselves. If they are not being upfront about sourcing, then shame on them.
Chonko:  It might not be outright lies, but it is indirect, implied purchases that aren't occurring. Place A has a down to earth, farmy type image. Everyone assumes they buy local. They don't. That's really common. All these places that try to be hyper artisanal... they buy commodity stuff. They probably like a ton of farm Instagram photos, but they don't buy anything... If they all walked the walk, there'd be a ton of new pasture-raised meat farms popping up. People always say "y'all must be killing it," (but) we don't. We get by, usually, but we literally eek out a living most weeks. Not for lack of effort, either. The reality is there's not a lot of local farms truly succeeding. I know three in the last year who've gone out of business. You'd never know that from looking at what Georgia Organics or the foodie movement has to say, but it's the cold truth.
Whitmire:  I would concur that a high percentage of chefs and restaurants that say they use locally sourced items, do in fact buy locally grown products. As is the case in all human endeavors, there are, and always will be, a percentage of people that misrepresent who they are or what they do. I think the possibilities for deviation from the truth occur as groups grow and feel compelled to centralize their buying decisions, which inevitably leads to someone in a back office making purely financial decisions and feeling the need to decrease costs and/or increase the efficiencies of purchasing. But, the organization will not rush to change their representations to the public, either willfully, or on purpose, and so a misrepresentation occurs until someone significant writes or blogs about it. I have had several occasions in the past where a gross misrepresentation was being made. I saw the chef and told him that I didn't appreciate the lie and would not ever sell my beef to them again, and walked out! This has occurred on a couple of occasions, but not in Atlanta.
Chonko:  There was a barbecue restaurant in Savannah (that) used to tell people they bought chicken and pork from me - they didn't. Their website says, "all our meats are locally raised." Total horseshit. That's an outright example, (most) others are indirect. Implied. A place might buy a tiny amount of something and mention it on Instagram... it's implied that they buy a lot.
On how diners can both support local sourcing AND understand which restaurants and purveyors deserve their support:

Leahy:  See which chefs are out there at the markets, talking with farmers, doing demos, doing fundraisers, and showing that they care about the idea (of local, sustainable sourcing). After that, ask the farmers at the markets who uses their stuff. By and large it's an honest group. And if you go in and talk to the wait staff, chef, or others at the restaurant and you can see the passion, knowledge, and attention, then you are probably in a good place. Conversely, I think you'll be able to tell the other way as well. Money is a great motivator for change, and the loudest opinion you can share on this topic is the one you make with your wallet, not your mouth.
Stieber:  People need to remember that a city's restaurant scene isn't successful only because of talented chefs; great diners are also required, and people need to actively work on becoming educated, open minded diners as much as chefs need to refine their skill sets. If customers are more aware of what real food is, they can hold the imposters accountable on the restaurant side.
Chonko:  I think you need to research. Ask the farmer. They'll tell you. Ask the restaurant to tell you who they source from. Local sourcing is an extension of regional pride. Be proud of where you live. Who wouldn't want to say that Georgia produces the best hogs and the best poultry on the planet.
Whitmire:  Ask the chefs/waiters about the sources of their produce, meat and fish. That will give the establishment an opportunity to speak about their effort to use local sources.
Stieber:  When you go into a restaurant, don't (just) ask 'do they source the food I believe in,' (but also) ask yourself, 'CAN they source the food I believe in?' High volume (lots of seats, lots of covers) is the worst thing for quality, so you can be pretty damn sure that place you go to that churns 'em and burns 'em on the weekends is NOT sourcing as much local stuff as they flaunt (if they claim they do). I also suggest people put some effort into dining and buying ingredients for home. The supermarket era has certainly driven a great rift between people and where their food comes from. If you want to know you are getting the best, you need to know what the best is! Where does it come from? What does it look like? When is it available? Is it sustainable? Learn how to break down a chicken! Genuinely and actively care about your food, and you'll come to find it will be a lot easier to figure out which restaurants do, too.
Some comments have been lightly edited for length and clarity.