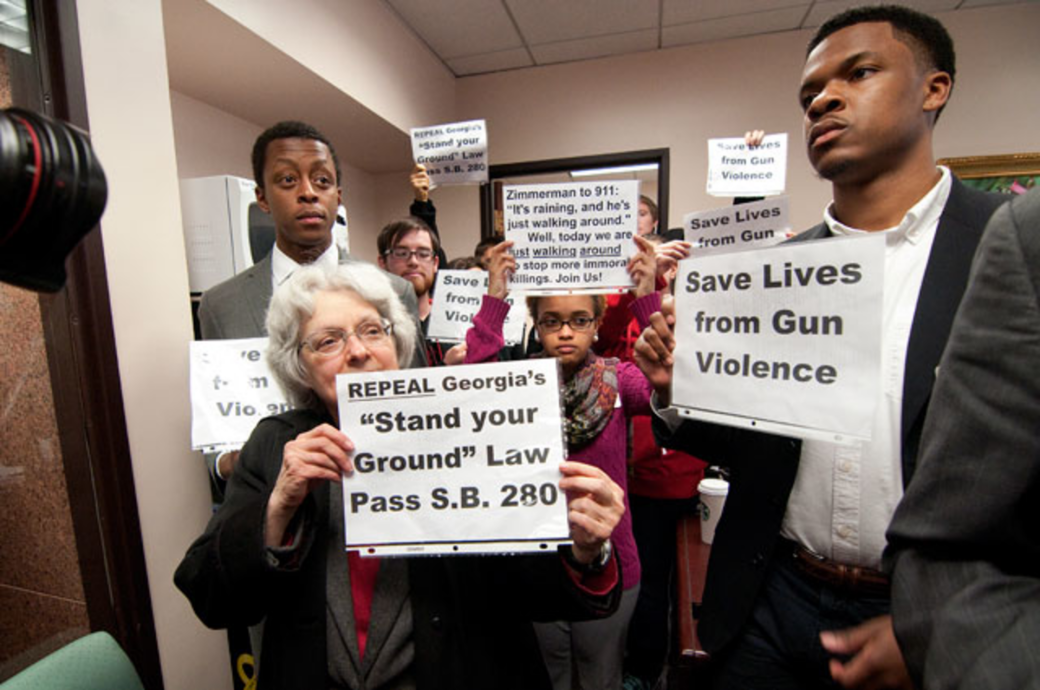 I'd never been arrested before last Monday when I, along with 23 of my comrades, were handcuffed, charged, and booked into jail. All 24 of us, including many students and other individuals of various ages, races, and backgrounds, were participating in Moral Monday's weekly demonstration at the Capitol to protest the state's Stand Your Ground law. Days after our arrest, a similar erosion of justice in Florida led to a jury's failure to convict the killer of one of Georgia's native sons, Jordan Davis, on first-degree murder charges.

Stand Your Ground justifies the quote, "Shoot first, ask questions later." I am deeply troubled by this law's effects, particularly its ability to give people a license to kill and unequal applicability based on race. The law's infamy continues to grow with every George Zimmerman or Michael Dunn that is not held fully accountable for his actions. Our call for the repeal of this law is one of a handful of issues that the Moral Monday Georgia movement has rallied behind. The change we seek is not radical: Medicaid expansion to cover the state's poorest citizens, as approved by the Affordable Care Act; education spending policies that don't divert public school funding to private schools; and gun laws that don't empower individuals to act as judge, jury, and, in some cases, executioner.

In his 1964 Nobel Peace Prize lecture, the Rev. Martin Luther King Jr. stated, "... modern man's chief dilemma, expresses itself in problems that grow out of man's ethical infantilism." It is ethically infantile to allow justice to be perverted by immoral laws. Moral Monday's activists believe that the preservation of true humanity is contingent upon those who are willing to stand against a political majority that practices injustice and inequality.

Because the extreme right-wing party in power in this state has been so unwilling to speak candidly about moral issues such as Stand Your Ground, we organized our Feb. 10 sit-in at the office of Senate Judiciary Non-Civil Committee Chairman Jesse Stone in favor of Senate Bill 280 to repeal Georgia's Stand Your Ground law.

Spelman sophomore Tabatha Holley reflected on the actions from students of the Atlanta Student Movement in the 1960s and knew, like them, it was time to make a sacrifice for the generations to come. "Whose lives are at stake as we allow laws like Stand Your Ground to continue to take precedence?" she wrote last July in an Albany Herald guest commentary. "How long shall we allow the slayings of individuals who look suspicious?" As a woman of color, Holley was inspired to write a letter to her unborn son out of fear for the safety of future generations of black children directly impacted by such laws. This is what moved her to such meaningful action last week and gave her the courage to walk into a jail for the first time in her life.

Getting arrested was also my duty on behalf of the thousands of Georgia millennials who boldly stood before the Richard B. Russell Federal Building last year to protest Zimmerman's acquittal with people across the country. Millennials have the most to lose from this law. We are the ones who are gunned down in the streets. We are told that Stand Your Ground is for our protection, yet the arbitrarily applied law fails to live up to its promise by making us both targets and perpetrators. Such was the case last year when a 22-year-old black Georgian named Herman Lee Smith III was convicted of murder after a jury determined there was no "reasonable belief" that his life was in danger despite testimony declaring that the victim had walked toward him with a gun.

My arrest was an appeal to the consciousness and morality of our elected officials to repeal this unjust and failing law. My moral conscience guided my actions last Monday as I pictured the face of a Marietta mother named Lucy McBath — Davis' mother.

To Senator Jesse Stone, the irony of you describing Moral Monday as a "circus" is priceless compared to the current session of the General Assembly. Our "circus" protest, as you call it, displays an alternative to the use of violence you and other state lawmakers have legislatively empowered citizens to utilize.

You could've said that I and the 23 other citizens with me were standing our ground. That our lives depended on our taking a stand. That we, the 24 arrestees, came to your office to send our elected representatives a message that this law puts all lives in danger. That we showed strong moral beliefs and practiced nonviolence. That we could have offered a peaceful solution.

Our actions are humble examples of democracy at work. One of the first and most fundamental duties of government is to protect its citizens. Therefore, I urge you to take seriously the concerns for Georgians' peace and safety by giving Senate Bill 280 a full and fair hearing. That's what something done in wisdom, justice, and moderation looks like.

Ronnie Mosley is the founder of Millennials Movement, a Georgia-based student and youth think tank committed to impacting public policy during legislative sessions and elections for community and cultural uplift.