Our future is more diverse and inclusive than the Confederate flag 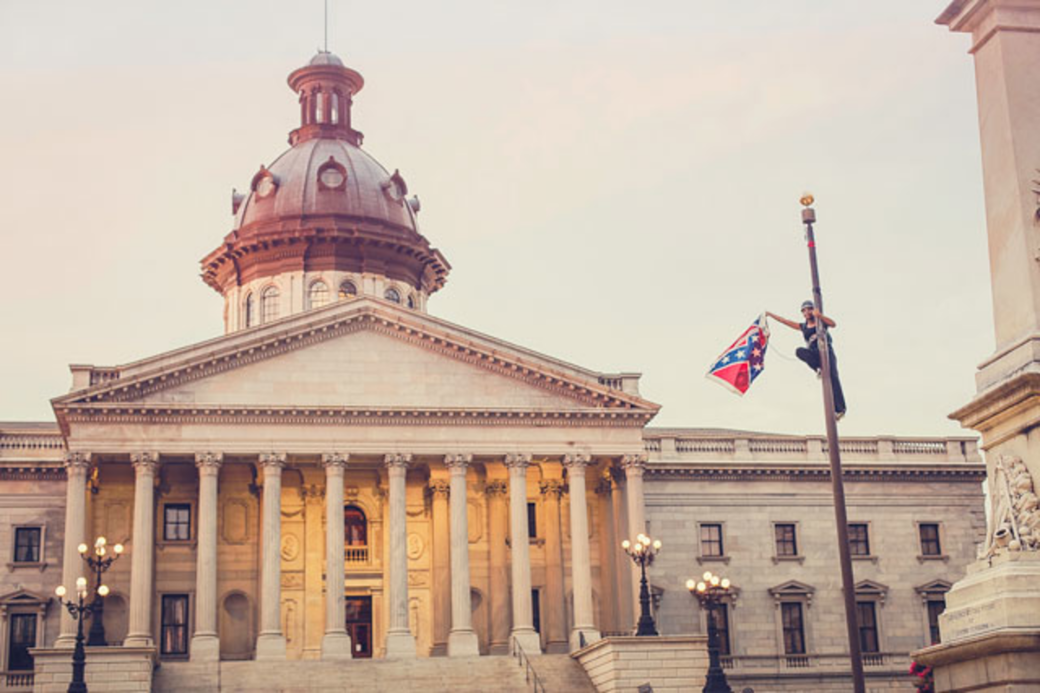 Gov. Nathan Deal had a sudden change of heart June 23. Minutes after telling reporters he had no problem with Georgia offering a license plate emblazoned with the Confederate flag, Deal turned around and said he favored a redesign — but not outright elimination — of the tag. What that would look like and when it would take place was unclear. Afterward, the Department of Revenue, which issues the plates, removed them as an option from its website.

Deal's decision came amid widespread national outcry over the flag after a white gunman allegedly shot and killed nine people in a historic black church in Charleston, S.C. South Carolina Governor Nikki Haley called for the flag to come off of state capitol grounds, something the state legislature will have to debate and vote on. Other Southern states began removing homages to the Confederacy. Down came the flag in Alabama. Governors in Virginia, Tennessee, and North Carolina said they wanted the Confederate flag off car tags.

In Georgia, other memorials and hat tips to the Confederacy, including Stone Mountain and even the state flag, are being reconsidered.

These actions should not be dismissed as merely symbolic. The tragedy at Charleston's Emanuel A.M.E. Church forced a reckoning with the Confederate flag that has been decades in the making thanks to persistent activism. The flag is one of the last visible vestiges of a culture of white supremacy that has shaped this country since its founding. But it also represents less visible historic oppression as well as decades of suppressive laws and policymaking that often unfairly impact minorities. The call to take down the flag is not an effort to eliminate an era of history or forget the past. It is in part a call for continued action in the fight against institutions that perpetuate inequality. Change won't happen quickly, but neither did the action we're now seeing around the Confederate flag.

In the years leading up to and following the Civil Rights Movement, legislation including the Civil Rights Acts of 1964, the Voting Rights Act, the Fair Housing Act, and more made law basic ideas of fairness for those who face discrimination. Those measures, along with the dogged activism of advocates who risked incarceration and sometimes violence, pushed the needle to keep the country on the slow road to progress. The efforts have been needed. It seems that every year lawmakers try to chip away at the legislation or build more roadblocks.

The success of Atlanta and Georgia is dependent on the diverse group of people that live here. We can probably all agree that healthy, educated, and fairly treated citizens are in the best interest of our city and state. But decision-making that restricts access to health care, makes voting difficult, limits mobility through fragmented public transit systems, and creates a prison system that disproportionately affects minorities would say otherwise.

Atlanta has the highest income inequality among the nation's 50 largest cities, according to the Brookings Institution. Earlier this year, the Atlanta Regional Commission reported that 88 percent of residents of metro Atlanta's high-poverty neighborhoods are non-white. Harvard University researchers have found that a child born to parents living on low incomes has a small chance of escaping poverty. Rents in Atlanta's most central neighborhoods have become laughably high. Poor kids aren't getting the same quality of education as more privileged ones in Atlanta. People are sitting in local jails for being unable to pay fines for minor violations. Black people are arrested for marijuana possession with greater frequency than white people despite the fact that white and black people use the drug at similar rates, according to an ACLU report. Policies, usually ones crafted at the city and state level, are some of the chief contributors to these social issues. And they disproportionately affect black people living in metro Atlanta.

We need laws and policies that support diversity and focus on root problems. We need to recognize, for instance, that throwing the mentally ill in jail does not address mental illness, homelessness, or crime at their cores.

The last week in June was full of progressive victories in America. On June 25, the U.S. Supreme Court upheld the Fair Housing Act and preserved the Affordable Care Act, protecting health insurance coverage for hundreds of thousands of Georgians. On June 26, the justices ruled that all same-sex couples across the United States, including Georgia, have the right to marry.

Around sunrise on June 27, activist Bree Newsome scaled the flagpole at South Carolina's state capitol to take down the Confederate flag. In an act of civil disobedience, Newsome took action where political leaders had dragged their feet too long.

In Atlanta, and in Georgia, we should be similarly fed up with waiting — waiting for statues of white supremacists to be removed from our capitol grounds, for Medicaid expansion that sits just out of reach, for a public transportation vision that accounts for the low-income workers located in the suburbs.

The recent Supreme Court rulings are not a sign that the battle is over. They should fuel the effort to keep fighting. We should use the momentum surrounding marriage equality to ensure LGBT men and women receive equal housing and workplace rights. We should convince lawmakers to expand Medicaid so that hundreds of thousands of Georgians can obtain insurance.

We in metro Atlanta and Georgia need to be as impassioned as those around the country calling for the flag to come down and find a new home in a museum. We must hold ourselves and those in power to a high standard. Just because it is high does not mean it is out of reach.