Opinion - Stop laughing at the legislature

Instead, speak up and be critical of the 40 days wasted 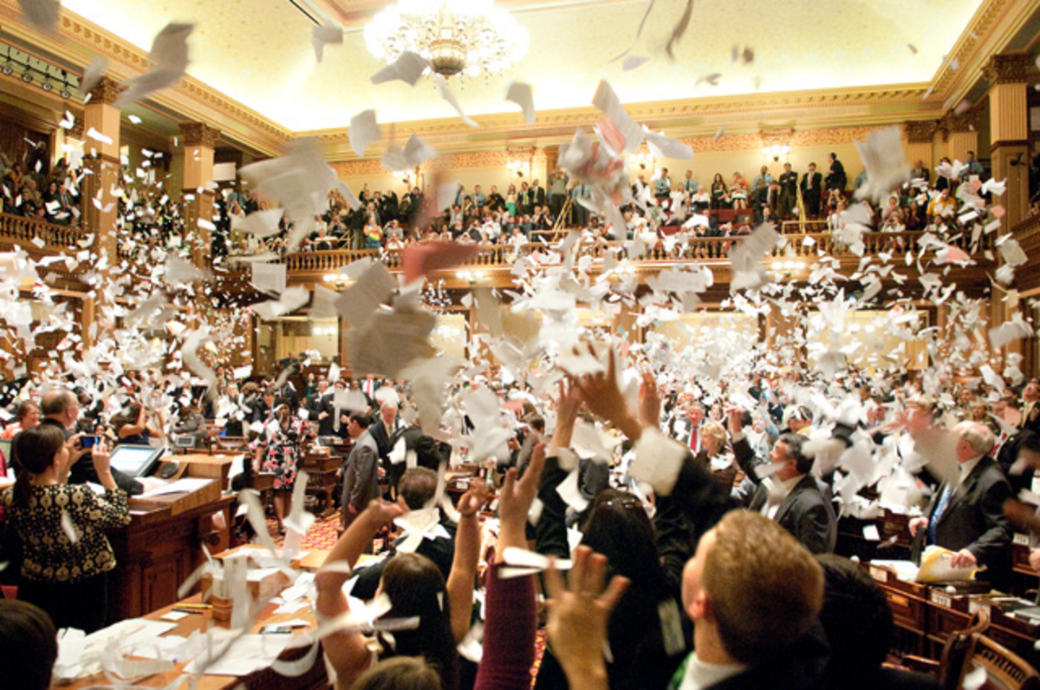 The Gold Dome has its traditions. On the eve of the General Assembly, state lawmakers pile into Downtown's historic Freight Depot and rub elbows with lobbyists while feasting on barbecue. Freshmen lawmakers are sometimes respectfully heckled by their peers while defending their first bills in the well. And at the end of 40 days, reps and senators toss papers in the air when chamber leaders gavel the session to a close at midnight. The custodians are left to pick up the mess.

The days that fall between the pork dinner and the late-night adjournment play out like a lame version of "House of Cards": chicanery, horse-trading, showboating, and occasionally outright corruption.

In my early years covering the Gold Dome, I laughed at the low moments and chuckled at the jokes about the General Assembly ("Hide your wallets, lock up your daughters"). But Georgians need to stop laughing at the Legislature. We need to stop giggling at the ridiculous bills people propose, paying close attention to the dumb soundbites, and ignoring all the real damage the Legislature does to the state each year.

In the past eight years that I've covered the Gold Dome, I've watched a governor pray on the Capitol steps to ask a higher power to end a drought. I grimaced as a state senator named Chip push a bill banning the implantation of microchips in people without their consent, a problem that does not exist. I witnessed a different state senator named Chip hold a closed-door meeting (that was later leaked online) about Agenda 21, a cockamamie conspiracy theory that argues the United Nations wants to stuff us into Soviet-style apartments under the guise of "smart growth."

I viewed people waste precious time and oxygen discussing a bill inspired by the tabloid godsend Octomom that would limit the number of embryos a woman could have implanted via in-vitro fertilization. Last year a lawmaker tried to ban the creation of "human-animal hybrids" such as man-made centaurs, another problem that does not exist. And who can forget that one session when a state lawmaker missed 91 percent of votes, essentially leaving his district unrepresented, partly because he was cooperating with law enforcement authorities while also defrauding the church where he was a pastor?

This is just a conservative summary of dozens of boneheaded bills and poor judgment calls. Sure, other lawmakers have condemned such bills. And in some cases, leaders of both chambers have swatted down stupid proposals. But in other instances, they've quietly allowed them to proceed.

Too often these ridiculous proposals are brushed off. Silly bills are the Legislature's bailiwick. They're only doing this because it's election season. Georgia's crazy and the really wacky proposals don't pass.

Perhaps it's the fact that good ole boy humor feels like a dagger to my eardrums. Maybe I'm just getting older and more curmudgeonly. But in recent years, when I look at the overwhelming number of problems affecting Georgia — income inequality, dwindling rural towns and stagnant urban poverty, piss-poor education, and an automobile addiction — my attention turns to the role state lawmakers could and should play in helping to solve them. And then I think of the 40 days wasted.

Oh, lawmakers step up. Embarrassing exposés pressured lawmakers to finally pass something resembling ethics reform. Last year, it took billions of dollars in backlogged projects to finally prod them to do something about transportation — a change to the gas tax that will only generate enough cash to maintain the state's existing road network. It takes the shuttering of rural hospitals and arm-twisting by big business to convince lawmakers that expanding Medicaid might be worth considering. It takes a drought of Biblical proportions to spur serious talk about conserving water. I don't want to think what must happen to spark discussion about climate change.

By giggling at this tomfoolery and settling for mediocrity, we give a pat on the head and a pass to lawmakers while also overlooking the real damage the Legislature does. While we chuckle at the latest bill proposing a solution to a nonexistent problem, we don't rage at the elimination of a low-income tax credit that goes to the poorest of Georgians. While we fixate on lawmakers addressing the outrage of the year — illegal immigration, the Affordable Care Act, the expansion of gun rights — we shrug over the bill that cuts one company a break simply, well, because. We accept that the Legislature has become a farm team for the executive branch, a place to wait for Gov. Nathan Deal to pluck you from a thankless $17,000-a-year job for a six-figure gig in the executive branch. We get the government we tolerate, or which we have been gerrymandered into tolerating.

A glass-half-full type of person would say — and it has been said to me many times — that the steady stream of dysfunction offers headlines and news stories, and keeps me and other journalists busy and employed. Sometimes the soap opera is so painful that all you can do is laugh. And a plea for seriousness might sound hypocritical coming from us. We do laugh.

But I'd much prefer a state government short on myopic proposals and long on boring policy talk about improving lives and fixing real problems. I'd even consider supporting a yearlong legislative session and livable salaries that could possibly attract a more serious crop of candidates. I could do with fewer new laws to appease a small sliver of the state's population, sweetheart deals to satisfy a lobbyist standing outside the House or Senate, and the wasted days. I would embrace progress at the expense of humor, or another headline from a national publication asking what is wrong with Georgia.