Inman Park is where members of the city's creative class go when they hit the big time - or where those seeking the refuge of quaint coach houses or partitioned Victorians go to fake it. It's the perfect mix of resplendence and cool. Founded in the 1890s, the neighborhood prides itself on being Atlanta's first suburb - and among the first intown neighborhoods to experience a resurgence in the late 1960s.

10 Things to do in Inman Park

Try the deep-fried calzone at Fritti

There are so many instances when deep-frying an already kind of unhealthy food just seems egregious and gross, the kind of doctors-be-damned excess reserved for fatties attending middle-American state fairs. Fritti's deep-fried Calzone alla Napoletana, however, is just excessive enough. Of course you can get it baked instead, but if you happen to spy a golden, bubbly, fried version on its way to another table, you'll wish you would've splurged.

Intended to scare away Canadian geese that have alienated resident goose Lucy, the Styrofoam "Gator Aid" got its eyeballs pecked out and is now more likely to scare away small children.

Get invited to a wedding/reunion/party at the Trolley Barn

Probably Inman Park's most iconic building, the Trolley Barn was in danger of being demolished before it was restored to its former glory and turned into an event space. If you can't afford to rent it out for your nuptials - eight hours on a Saturday will set you back $3,700 - make friends with someone who can.

Even with the emergence of Sister Louisa's Church of the Living Room and Ping Pong Emporium in the Old Fourth Ward, there's a woeful dearth of places to play table tennis in Atlanta. Victory has really great sandwiches, a full bar, AND a great way to burn off the calories post-meal. Or you can work 'em off on the punching bag if you're not up for a game.

See an exhibit at Whitespace Gallery

See contemporary art in an ancient (by American standards) space. Located in an 1893 carriage house behind an old Inman Park mansion, Whitespace is known for exhibiting art by some of Atlanta's freshest, young talents. The gallery itself is great - all exposed brick and original wood - but the courtyard is truly lovely at openings.

Walk in the footsteps of chef Gordon Ramsay at Park's Edge

Earlier this year, Park's Edge - a restaurant that was struggling after a PR gaff that alienated neighbors - appeared on the Fox program "Kitchen Nightmares" to benefit from the wisdom of the craggy-faced chef Ramsay. Since it was on the show its food is better, business has improved, and the best part is that executive chef Jorge Pacheco is more than happy to talk about what it's like to have your shit aired on national television.

Have a cocktail with a sense of humor at Sauced

Ria Pell's second restaurant venture - you know, Ria of Ria's Bluebird fame - Sauced is like a kitschy pre-"Mad Men"-era rec room, but with far more creative drinks. There's the tequila-based Swinger from Seville and the lemony-basily vodka concoction they call the Isle of Lesbos. It serves a fun variety of virgin drinks. But, c'mon.

Performing improv and scripted stage plays, all you really need is Curt Holman's endorsement: "It's funny."

Lots of people are weird about community pools because they think children urinate in them. It's true. They do. But that's why chlorine exists, folks. And, really, when it's 100 degrees out, who cares? Unfortunately, you have to be a member to swim at the Inman Park pool, but, hey, the waiting list is only 50 families long. 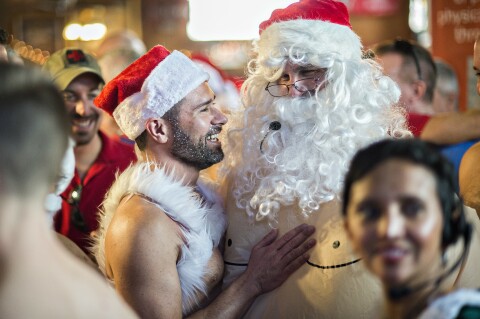 Browse Christmas events as well as recommendations for the hottest parties and markets. CL's critics & readers weigh in on the definitive guide to Christmas in Atlanta. | more...
Search for more by Staff
[Admin link: Neighborhoods - Inman Park]