Catch four of the contributors at the Decatur Book Festival on Sat., Sept. 2.

There's nothing more Southern than a good-ole-fashioned secret, deep-seeded and closer to home than one might think. It is with this in mind that Tayari Jones, Spelman alum and author of Leaving Atlanta, compiled the stories that make up Atlanta Noir, Akashic Books' newest addition to its original noir anthology series. The book holds 14 chilling tales of urban grit and moral ambiguity, each one written by an author with an intimate knowledge of the city and edited by Jones, whose own writing appears in the collection.

These secrets, which Jones refers to as the underlying cultural currency of the South, drive the stories forward, illuminating the deeply disturbing elements of the city that some may choose to ignore. "None of the stories moralize," Jones says. "You walk away uneasy the way you walk away from real life experiences feeling uneasy."

These secrets are no small trifles; they're held close to the heart and have the potential to ruin lives and disrupt entire communities. Each story takes place in a different neighborhood, penned by a lineup of authors which includes Daniel Black, Jim Grimsley, Brandon Massey, David James Poissant and Gillian Rojes. Also included is the debut appearance of chemist-by-day, writer-by-night Alesia Parker, whose story "Ma'am" is her first published work.

Uneasy may be an understatement for stories like Brandon Massey's "The Prisoner," in which a well-meaning ex-con becomes tangled in the web of a poisonous retired judge. Jones' "Caramel" takes place behind the doors of a megachurch pastor's bedroom. Perhaps the most disturbing part of the stories is that many of them could very well be true. Themes of gentrification and tense race relations are threaded throughout the stories.

Jones and her contributors take artistic liberties with their interpretation of the noir genre, which is typically characterized by dark plots of crime-fiction, turning instead to craft unsettling narratives of the city's everyday occurrences that never end as well as one would hope.

Atlantans will recognize characterizing traits of the city that recur throughout the collection: our frantic snowstorm shutdowns, low-flying planes and our penchant for naming everything Peachtree. While these occasional odes to the city's character can be amusing, the stories are more often than not just downright disturbing, peeling back the floorboards of the city to reveal the rotting foundation underneath.

Readers of Atlanta Noir will be reminded of the truths lurking in the corners of historic Inman Park homes or lying buried underneath flashy new high-rises in Midtown. The range of stories provided in the collection provides an almost perfect snapshot of the city in which we live, written by people who know it best. "After all," Jones says, "we know where the bodies are buried."

The Bulgarian designer and illustrator doesn't serve any ideology | more... 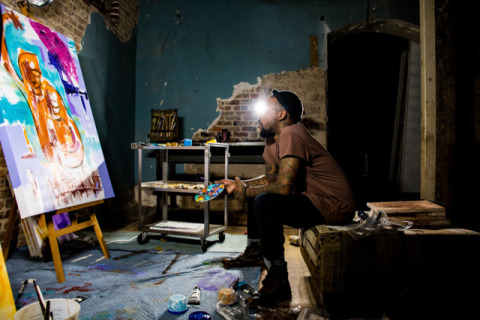 The Serenbe forest becomes a stage with zip lines and overhead sets | more...
Search for more by Elizabeth Wolfe