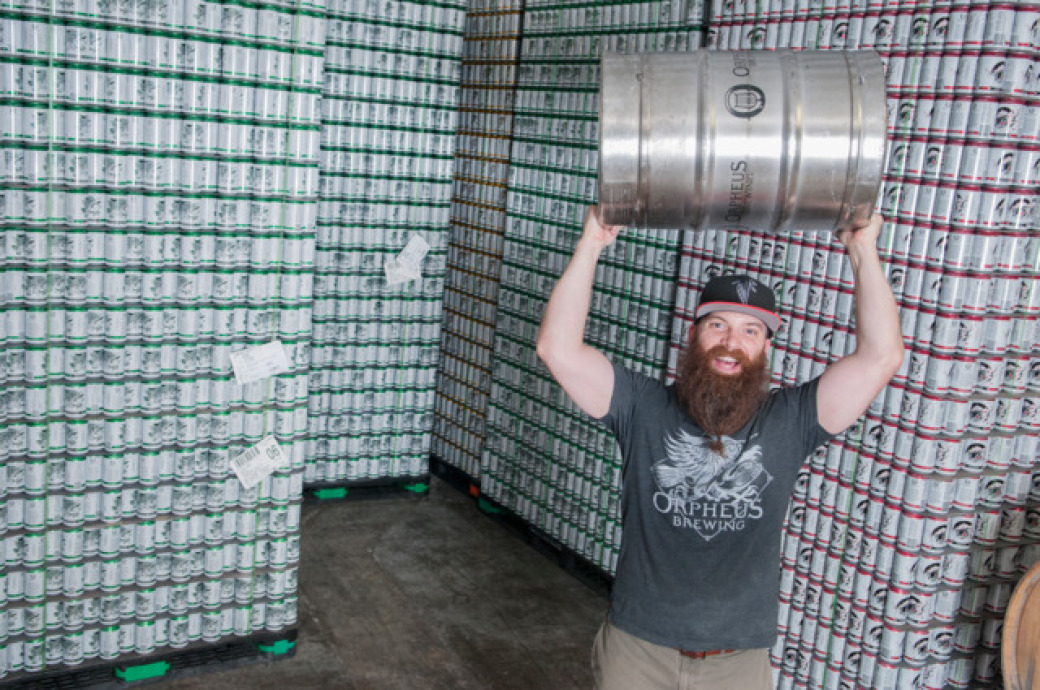 Born in Roswell and raised in Marietta, Alme says his family got "out of the East Cobb suburbia as much as they could, to give us some American diversity." Perhaps unsurprisingly, he developed a travel bug, visiting the flourishing beer scenes of San Diego, Denver, Asheville and more.

Eventually, after getting fired from a sales job he hated, Alme made his way to SweetWater, where he worked for three years, half of them as taproom manager. When an assistant brewing position opened up at Orpheus Brewing this past March, he jumped at it. "I'm told that I submitted my application within minutes after they made the position public," he says. He was promoted to brewer in two months.

Creative Loafing caught up with Alme to chat about favorite beers past and present, what he's thinking about the future, and how Sept. 1 is going to change just about everything for Georgia beer makers.

The first beer I can clearly remember enjoying was Sam Adams' Old Fezziwig Ale during the Thanksgiving holidays at 17 years old. It was sweet, rich and incredibly flavorful, which was in stark contrast to what was typically in my family's fridge. Sampling the beers from their winter variety case with my family over that long weekend left an indelible mark on my craft brew consciousness.

When did you first start thinking about making beer your living?

I tried making use of my business degree with several sales jobs, but hated every moment of peddling products or services I wasn't passionate about. My utter lack of enthusiasm inevitably translated to poor performance and I was let go from my job at the time. In hindsight, it was the best thing that could have happened. I decided to get a part-time job while looking for full-time work and wound up pouring beer and giving tours at SweetWater. My intent was that it would be temporary, but I wound up home-brewing in order to better understand and explain the brewing process to tour guests. Before I knew it, beer was in my blood. The rest is history, as they say.

What did you learn at SweetWater?

Folks like Zak Schroerlucke, now marketing for Crosby Hop Farm, taught me about the brand, brewing and packaging, but evangelized beer in an infectious way. The old line about doing what you love and never working a day in your life felt significantly less d with him. I was home-brewing nearly every week on my days off and found myself increasingly fascinated with the production side. Working with the masses in the tasting room every week slowly felt routine, and it became clear that it was time for a new challenge, to move into the back of house. As my first gig in craft beer, working for the Southeast's largest brewery was a unique experience.

What attracted you to Orpheus?

I had a keen interest in what Jason Pellett was doing since day one. In a sea of hoppy pale ales, it was refreshingly daring to see a local brewery open with a flagship tart plum saison. They weren't afraid to push the boundaries here locally and take a gamble on Atlanta's readiness for sour beer. The experience I've had has completely validated my decision to join their team.

How excited are you about Sept. 1, the day direct sales begin for Georgia breweries?

We're all stoked to see the tasting room become a major revenue generator and generally less confusing for our patrons. I'm nervous to see how the changes are welcomed by the public. There's going to be some confusion until folks forget about the whole "tour and tasting" model Georgia has followed for decades. I've typically envied the experiences had at tasting rooms across the country and it's exciting to see what's in store for a city known for hospitality. For all the talk about craft beer saturation and exploding bubbles, there's a ton of local growth to be had.

Where do you see yourself in five years?

I've always been laid-back and enjoyed going with the flow. However, my experiences over the last several years have taught me the importance in being decisive and forward thinking. Perhaps I'll open a sustainable urban farm brewery with goats to manage spent grain and produce artisanal cheese. I've increasingly been fascinated by apiculture (beekeeping) and will explore that eventually. I enjoy having home-brewed beer on tap, and will continue that hobby. The craft beer landscape is continually evolving, and as much as we think we know its trajectory, it's impossible to predict. Contributing to Orpheus' continued growth is an honor, and already helping to bring my vision into finer detail.