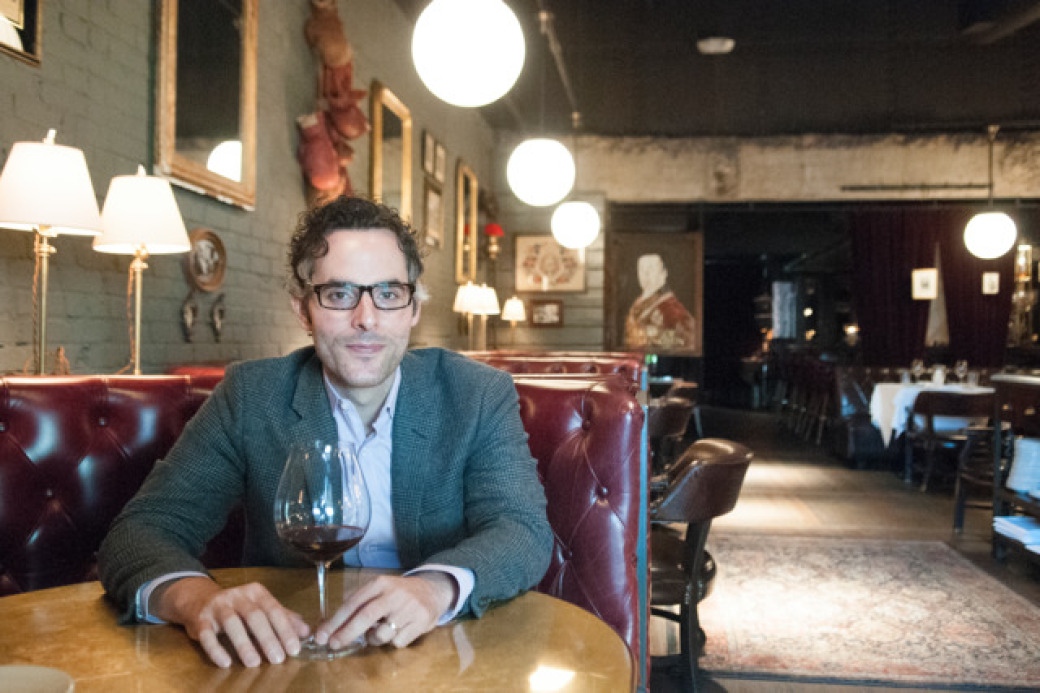 Eduardo Porto Carreiro. It's a damn good name for a sommelier, isn't it? Exotic, complex with a touch of mystery? The man himself, like his actual title he was just promoted to beverage director for all Ford Fry Restaurants is more down to earth. After establishing a notable wine career in Los Angeles and New York, Porto Carreiro moved to Atlanta in March, along with his "very pregnant wife" who grew up in Morningside. She was thrilled to give their daughter, now five months old, the chance to be closer to Atlanta family. He was thrilled to find such a good fit with the Ford Fry group.

Porto Carreiro is not new to moving around. Born in Rio to a Brazilian father and Uruguayan mother, he was raised in Vienna, Austria, and then the suburbs of D.C. Half a year into his life in Atlanta, the somm reflects on the path that led him from L.A. to New York, then on to Georgia.

What was the spark for getting into wine?

I had always loved wine. My family always had wine on the dinner table, and I remember sneaking little sips from my parents' glasses as early as the age of six. After college, I was faced with a choice of sticking with what I had studied (applied economics and business management at Cornell University) or pursuing a passion. I decided to be a little adventurous. I had been an actor and a singer through high school and college and figured I might as well give it a go. I moved to Los Angeles to pursue that dream. One thing led to another and, as most young actors quickly find out, it's important to have a solid "survival job."

So I became a clerk at a great little wine store in Los Angeles called Greenblatt's. It was also a deli ... probably the only deli on Earth where you can eat a great Reuben while drinking a bottle of Chateau Petrus. But I quickly moved to the restaurant side of things on the opening team of chef Neal Fraser's Grace restaurant. I worked my way up from a food runner position to waiter, and then sommelier and wine director at a rather fast clip (I took over the wine program at 23) because of a confluence of circumstances and the kind trust that the owners placed in me.

You also worked in New York, with some top restaurateurs ...

I moved to New York in 2012 and joined the sommelier team at Bar Boulud and Boulud Sud. I was there for about a year until I moved to Daniel Boulud's DBGB to run the beverage program there for almost two years. I joined Danny Meyer's Union Square Hospitality Group to open Untitled with chef Michael Anthony in 2015.

How did that shape your path?

My time with Daniel Boulud, having arrived from Los Angeles, it was essentially going back to basics, and waking up and realizing I had spent 10 years studying my bum off and thinking I had learned something about wine only to realize I really didn't know much at all. It was like going from college to post grad, seeing the depth of knowledge that my colleagues had. All of the sommeliers at the Boulud restaurants had incredible palates, and I learned so much especially from Michael Madrigale, who ran the program at Boulud and Boulud Sud ... spending time with him on the floor, sensing and feeling how to interact with guests. It's pretty visceral, the wine culture there.

Each fork in the road for my career was decided by trusting my gut and ... surrounding myself with people from whom I could learn and who shared my passion. I moved to NYC because I had fallen in love with a girl who lived there. We ended up getting married and as we began to think about our next chapter, a move to Atlanta became more of a conversation because that's where she had grown up. We were expecting a baby and didn't want to raise the child in Brooklyn. When exploring the hospitality opportunities in Atlanta before the moves, my biggest concern had been finding like-minded folks who shared my goals and passions when it came to the guest experience. The team at Ford Fry Restaurants was completely aligned with my philosophy of hospitality.

Now in Atlanta, what are you trying to do with the wine menus you're working on?

At the end of the day, I want everybody who comes in to be drinking something delicious. The most important aspect of putting a wine list together for me is that all of the selections are of integrity and come from farmers and winemakers that have an honest connection to their vines. That mindfulness in winemaking translates to the glass in a very soulful way. Any new wine that I've added to the programs over these last few months has followed that line of thinking.

For the Optimist, we like to remind our guests that this is a coastal spot so there is respect for regions that are coastal. More importantly, though, it's about what tastes good with the food, what appeals to the guests, and understanding how the seasons change. I try to be extremely in tune with what the guest is feeling when they walk in for three or four straight months, there's a lot of heat and sweating, so I want to have ros̩s, bubblies, extremely crisp fun stuff, but that shifts when it gets cooler. Just last week we started getting in bolder, richer wines which pair well with what guests are feeling a sense of season. It goes back to the food and the markets.

We're also having so much fun with the Marcel list, trying to tap into the concept of being a French-inspired throwback, shifting wines you might find at a brasserie in Paris front and center. The focus is on the great regions of France, but including regions you might not think of immediately we have a whole page dedicated to the South of France, and we're probably the only restaurant in Georgia with four Bandol Rouge on the list and people are buying them every night. We still have great Napa Cabernet, but we also like showcasing a lot of northern Rhone, because the way Marcel prepares its steaks is like Syrah heaven - so Cornas, C̫te-R̫tie, producers that make beautiful wine but don't often get a lot of love. We have several selections of Saint-Joseph which I think are extraordinary values. For more medium-bodied wines, we're going straight to the Loire Valley with Cabernet Franc, even for folks who might be thinking about Napa Cab or Bordeaux, because those really hit the spot.

Outside of work, how has Atlanta been?

My wife and I have had a lot of fun exploring the farmers markets around town. We love to cook and have become regulars at the Grant Park and Freedom Farmers Markets. I think the croissant at Little Tart Bakeshop is one of the best this side of the Atlantic. Drinking beers at the Brick Store in Decatur has got to be one of my favorite things to do in Atlanta. Also, if I had my druthers, I'd be exploring Buford Highway every weekend. Frankly, I've only just scratched the surface of what the city has to offer ... lots of deliciousness around town!

I'm just really excited about the Atlanta scene. I never thought that I'd live anywhere but L.A. or New York, but in the last five or six years of visiting Atlanta with my wife ... my in-laws are the biggest fans of Atlanta and very quickly started pitching us. Every time I would visit, my father-in-law would try to show off the restaurants. I feel as if I've landed in a good place and the sky's the limit.