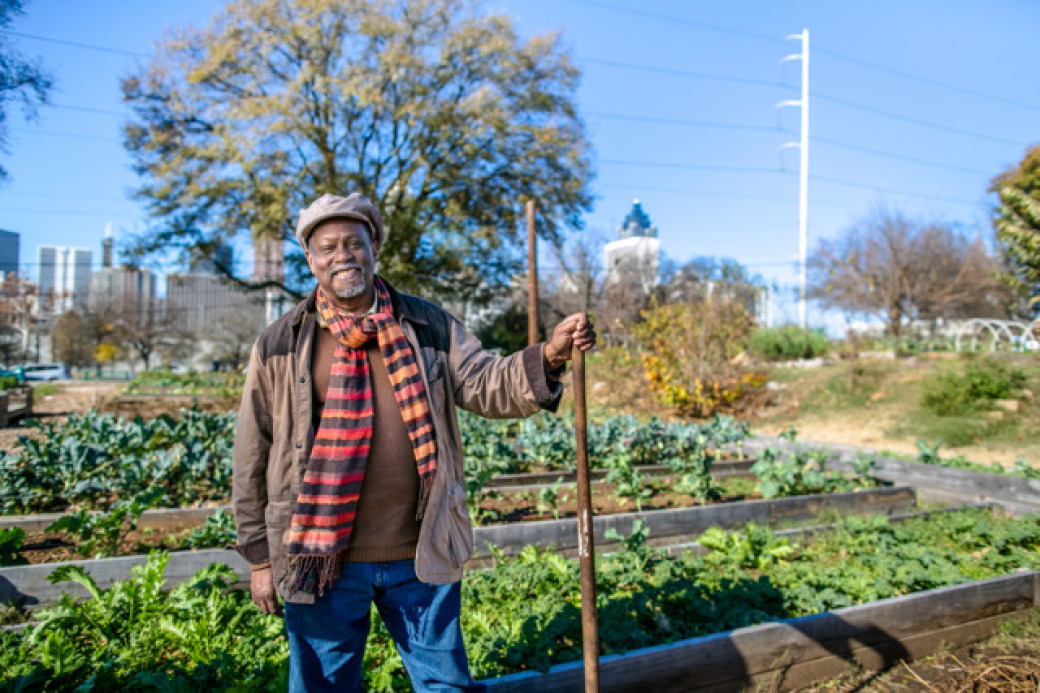 Nuri’s activist roots trace back to the early days of the Black Power Movement. “In order to build a nation, you have to be able to feed and clothe your people,” he says. While managing Georgia’s Nation of Islam farm in the 1970s, he was doing just that, working toward black liberation with a medium he knew well: farming.

Back in the 1960s, Nuri gained a bachelor’s degree in political science from Harvard University and a Ph.D. in plant and soil science from the University of Massachusetts. From there, he traveled to Ghana and Nigeria to build gardens and became the deputy administrator in the U.S. Department of Agriculture during the Clinton administration. His goal is and always has been black self-sufficiency, but he recognizes that it’s not easy for African-Americans to become farmers. In addition to lack of land access and capital, there are the vocation’s deep-seated connotations. As Nuri says, “It reminds black people of slavery.”

Whitney Jaye, a network organizer for the Southeastern African-American Farmers’s Organics Network (SAAFON) and a board member of Southwest Atlanta Growers Cooperative, agrees that farming carries “historical trauma” for black people. However, in rural Georgia, there are black farmers who have owned land for generations and are fighting to keep it. “Our network farmers need farm help, business help, and an organization that can provide opportunities for them to connect to each other,” says Jaye.

Though they’ve typically focused on rural areas, SAAFON is now starting to build infrastructure in support of urban farming, opening up the vocation to city dwellers. But with this goal comes new challenges. Land in urban areas is expensive, so if someone doesn’t have the privilege of generational wealth or access to initial funds for equipment, they are already behind. Then, says Jaye, black farmers have to “build the social capital to be able to sell to restaurants and chefs who, more times than not, buy from folks in their social circle.” With Atlanta’s restaurants dominated mostly by white men, building those relationships is a process within itself.

After returning to Georgia in 2004, Nuri became Georgia Organics’ only black board member at the time. Knowing this lack of representation didn’t mean a lack of existence, he immediately began seeking out other young black farmers in the area. Once they showed up, he says, “I put a shovel or hose in their hand and tell them to get to work.”

By 2006, Nuri had founded Truly Living Well Farm (TLW) in Atlanta’s Old Fourth Ward. His goal? To provide fresh food to the community while also educating and demonstrating how farming could be profitable and sustainable in metropolitan areas. Although TLW had to relocate to the West End because of development, TLW continues to mentor young people and their communities. Nuri’s hope is to build a bridge across “diverse cultures, backgrounds, and experiences.”

Chris Edwards of Mayflor Farms in Stockbridge is a former mentee of Nuri’s. He grew up in a family of farmers, and after completing a degree in ethnobotany (the study of how people and different cultures use indigenous plants) in Ghana, he moved back to Georgia to find a job. When he stumbled upon TLW, he says, he was embraced by Nuri and his staff. Working there not only improved Edwards’ urban farming skills, but also taught him about nonprofit functionality, as well as how to maneuver around the government. Nuri is proud of how far his mentee has come since going out on his own with Mayflor Farms. "Chris is more than adequately implementing the plan that I gave him,” he says.

Recently, Atlanta’s Community Farmers Market (CFM), where Nuri now serves as a board member, made a conscious effort to diversify by eliminating financial barriers for minorities, waiving the $125 vendor fee for farmers of color, women, and first-year registrants. But Edwards says that while this is a move in the right direction, he can still count all of the black farmers he knows on one hand. “I knew I was the token black farmer,” he says. “I’m not dumb.” Jaye adds that it takes radical actions to confront this disparity: “It is not just about letting black farmers in the markets. We have to ask ourselves, how can we create more?”

PLANTING SEEDS: Chris Edwards of Mayflor Farms in Stockbridge, Georgia, is one of Nuri's mentees.

Andrea Blanton, the educational chef for CFM, has drawn from her own experiences as a black woman to help make the markets more comfortable spaces for black farmers. “I make sure their location preferences are given and I help them with their displays,” she says, explaining that a better produce display means better visibility. Yet Blanton recalls moments over the years when her blackness didn’t seem welcome in the farming community, and one morning in particular when she held a chef demo at one of Atlanta’s whiter, more affluent markets. Upon arrival, she was met with hostility from the market’s manager, a white man. “He was being very rude to me, like he had no idea who I was or why I was there.” These feelings of unwelcomeness are a common theme among Blanton’s fellow black farmers, and prevent some of them from approaching Atlanta markets at all. But still, she says, “Most of the time, it’s worth it.”

Encouraging black people to farm and sell their products at very white markets is one hurdle, but getting black communities to appreciate locally-grown food is another, Edwards adds. Like any industry, people tend to buy from those they know, which often translates to those who look like them. “Buying black” has been a motto for the black community since before Nuri’s days as a Black Panther, and Edwards wishes Mayflor Farms could survive on black business alone, but that’s never proven to be feasible. Most of the folks shopping around the West End Farmers Market are black, but foot traffic remains relatively slow, even despite CFM’s doubling of S.N.A.P. benefits. “I don’t sell there because that’s not a viable market,” says Edwards. “There’s not enough money.”

Fifty years into his career, getting black people to embrace farming and the fresh, local produce that comes from it remains Nuri’s biggest goal. “I am on a laser-pointed mission, and I am undeterred in my work,” he says. “I see the community already. It just needs to grow. I will always be in the food business. It’s my career, and it’s my life.”

Of course, it’s not just up to black people to make black farmers feel welcome in Atlanta. It’s up to everyone, and that means making a concerted effort. At Grant Park Farmers Market, Jaye suggests buying from black vendors like Urban Sprout Farms, Mena’s Garden, and Mayflor Farms. Strolling through Freedom Farmers Market on a Saturday, stop at Truly Living Well and Grow Where You Are. “You can even reach out to farmers and buy directly from them,” she says. For example, Gilliam’s Community Garden sells turkeys and other custom-order meats, and Southwest Atlanta Growers Cooperative (SWAG) can connect consumers directly to a number of black-owned farms and gardens. 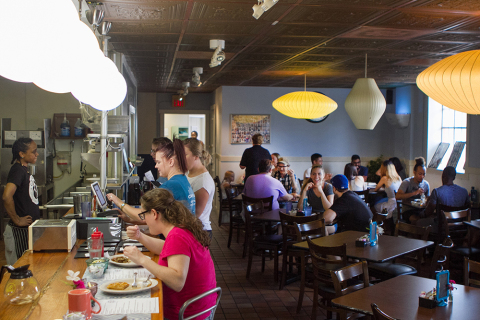