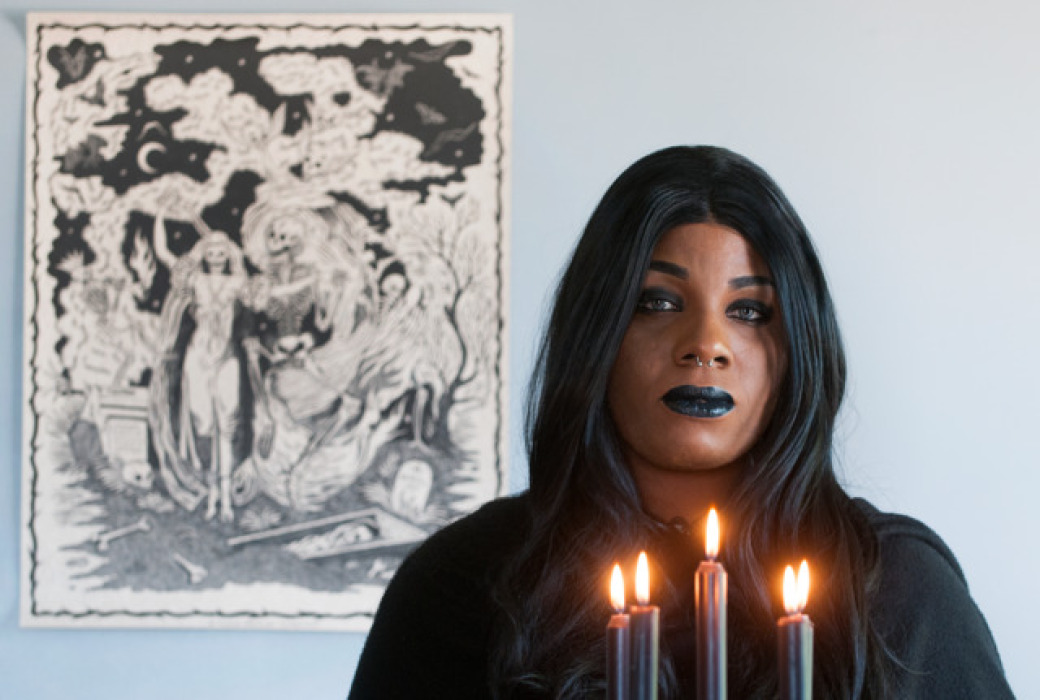 Adaora’s garnered more than 12,000 Instagram followers with her carefully curated shots of homemade vegan creations. Her raw absinthe torte is a bold teal with indigo butterfly peas and pale raw crushed cashews sprinkled on top. She creates mosaics out of cilantro and rosemary. Black roses flank a cocoa brown “Death By Chocolate Becomes Her” cheesecake. Adaora’s finished it off with a coffin and a cross. “Being someone who is goth and also being someone who is vegan, when I prepare my dishes, it's expression of myself through my food,” Adaora says, “just like what any other chef would do.”

She’s wearing a thigh-length black tunic and black leggings. Jet black hair falls down to her chest, slate gray contacts enhance her eyes, a tiny silver skull dangles from her septum ring. And she towers over me: 5’11” plus six-inch platform boots. “This is a toned down look,” she says. Adaora maintains her goth identity even as she embraces her Nigerian one. “Being goth ... this is my home, it's my comfort. I know who I am. I'm a proud Nigerian girl. I have not forgotten my culture. And when I have to dress up in traditional attire, I wear it well.” Traditional Nigerian attire typically involves bright, vibrant colors and intricately designed fabric. When she can’t wear black, Adaora dresses in purple, red or burgundy. A favorite dress is interwoven with black fabric, a nod to her true nature.

The inside of Adaora’s Grant Park apartment is shaded and cozy. Siouxsie and the Banshees’ haunting post-rock tunes flow through the speakers. Solid black furniture and fixtures complement cool gray walls. Black drapes hang from ceiling to floor on each window. Black roses fill a bat-shaped black vase, and a black skull sits next to it.

Adaora, 36, started Goth in the Raw back in 2015 when her family moved to Atlanta from Michigan. She had been vegan since high school and raw vegan for the past few years. Adaora began experimenting with raw recipes because she didn’t see herself in the mainstream vegan community. “What would I eat, being a person of the goth community? What would I like to see? I want to see the food that would represent me,” she says. Her husband, Matt, who’s also goth and vegan, came up with the name Goth in the Raw, bringing it all together.

Though elements of the gothic aesthetic are popular in mainstream lifestyles — black ice cream and burger buns, black attire — Adaora cautions against treating the goth lifestyle as simply a trend. “It's a fashion choice if you decide for that day that that's what you wanna wear, but it doesn't make you goth,” she explains. “Goth is about the culture, goth is about the music, art, the lifestyle. It is a lifestyle.”

Adaora’s dishes are a continuation of herself. She’ll start with something simple, then make it her own. “Let's say for example, pancakes. They're nice. They're normal.” She shrugs. “Let's make it black.” She uses activated charcoal to dye foods black and algae powder to create bright blue hues. She swaps out sea salt with green bamboo salt or red heirloom tomatoes with dark brown kumatoes that roast to the color of butternut squash. Adaora aims for diversity in taste as much as she creates diversity in color. Think bourbon vanilla and yacon syrup. White truffle salt, black truffle salt, red salt; the list goes on.

Adaora finds most of her favorite ingredients through online specialty shops or at Your DeKalb Farmers Market. Purple peas and black bell peppers come by way of a friend’s organic farm. Inspiration comes from her favorite books, films, songs, poetry and color schemes. She’s made a black cherry and cracked peppercorn popsicle called Nosferatu that was inspired by Bram Stoker’s Dracula. Her “mausoleum” cheese, made from macadamia nut and wild truffle, is dusted with activated charcoal, creating a marble effect reminiscent of tombs.

When she’s creating recipes, taking photos or otherwise maintaining Goth in the Raw, Adaora works for and with other brands. She contributes to Australia’s Vegan Lifestyles magazine and is working on a food and beauty collaboration with London-based cosmetics line Illamasqua. Her first e-book, about vegan desserts, is due out from Rodale, Inc. in time for Halloween. She’ll add a YouTube channel to her brand in early October.

Before putting all of her professional energy into Goth in the Raw, Adaora worked in music, fashion, food and medicine. Goth music fans might recognize her from her band the Razorblade Twins, and she had a short modeling stint in New York City. She says she intended to become a neurosurgeon (and worked in patient access at Emory when her children were born) but opted for a degree in fashion retail management, instead. Adaora never went to culinary school; she learned her way around the kitchen by watching and cooking with her parents.

Now she splits her time between her brand and her children: three-year-old Ikenna Draven and four-year-old Amaoha Aiden, each name honoring their parents’ respective heritage. (Adadora’s husband has English and Irish ancestry.) Adaora and Matt chose to raise the boys vegan, but don’t push the goth lifestyle onto her children. The decor in their room is mostly Marvel, and they’re especially into Guardians of the Galaxy and Black Panther at the moment. Adaora says she’ll support whatever lifestyle they choose — even if it means a trip to Abercrombie and Fitch. For now, they’re working out what their interests are as kids, and she caters to them.

“There's so much ‘Barney’ and ‘Sesame Street’ and ‘Wallykazaam!’ And I will stand here and be dressed like this singing the hot dog song by Mickey Mouse,” Adaora laughs. “It's whatever makes them happy.”

No results for query.
Search for more by Adjoa Dansa