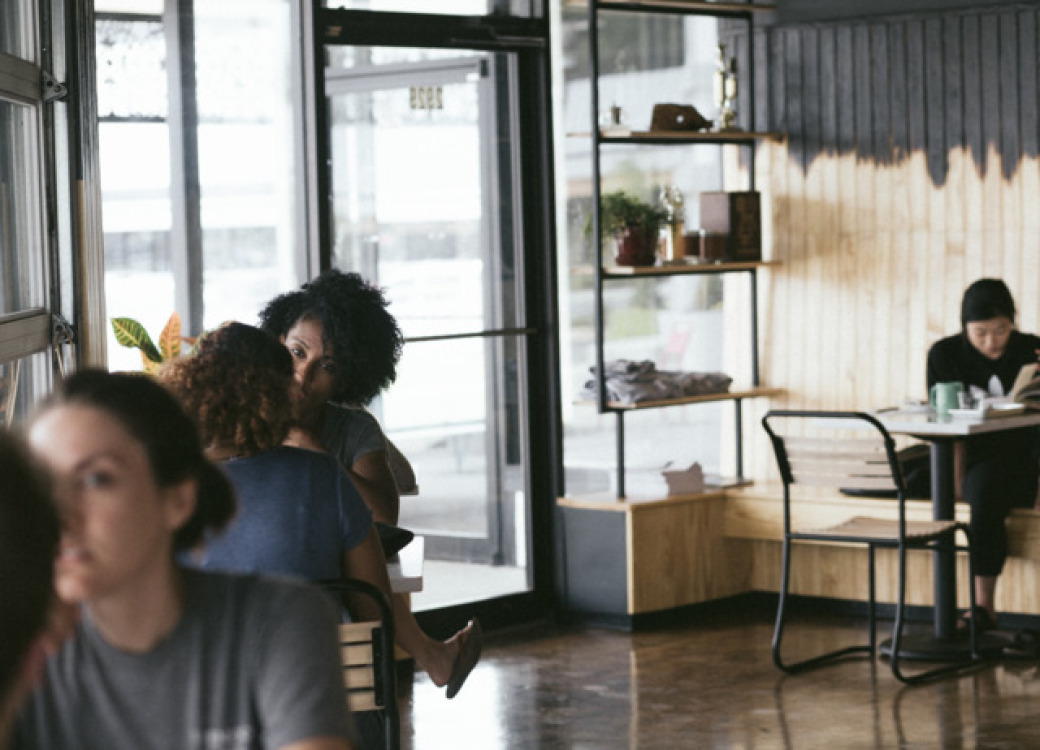 Spiller Park Coffee was batting a thousand. The Ponce City Market stall, co-owned by James Beard award-winning chef Hugh Acheson and barista extraordinaire Dale Donchey, was bustling, the accolades rolling in. But Donchey wanted to grow further, to open a brick-and-mortar location in which to hang his proverbial cap. And this fall, he and Acheson have done just that, with a standalone spot in Toco Hills where coffeehouse meets tasting room.

JAVA LORD: Spiller Park Coffee's co-owner Dale Donchey sits outside his new Toco Hills coffeehouse.Robby Simon
Spiller Park Coffee was born when Ponce City Market developer Jamestown Properties approached Donchey about opening a Steady Hand stall in the food hall. Instead, Empire State South's Acheson challenged him to come up with a new brand that better reflected Atlanta. As Donchey researched the city, he learned about R.J. Spiller, a noteworthy club owner who bought the former site of Ponce de Leon Field in 1924 and erected a concrete and steel stadium for the Crackers, dubbing it Spiller Park. The state-of-the-art stadium brought a lot of exhibition games, like the one where Babe Ruth hit a home run, but was also an important place to see and be seen in Atlanta, boasting other attractions such as a swimming pool, bowling alley, and gambling in the grandstands.

"I got fascinated with the idea that Atlanta does not hold onto its history very well," Donchey says. "It was about R.J. Spiller creating an environment. It was important to him to have equal seating in the stadium, even during a time of segregation, for black and white patrons. It was about connecting with the community and for families to come together along with different kinds of people. That's what really caught me about the story."

Now something of a history fanatic, Donchey has turned his attention to Toco Hills. The new Spiller Park Coffee stands in what is likely one of the oldest shopping centers in Atlanta. Neighbor Toco Giant Package Store has been operating for decades and the Bagel Palace has been there since 1993. "Toco Hills is going through a unique time where it is starting to change over," Donchey said. "No one has pushed the envelope here outside of a few places but Toco Hills deserves good things and people who stand for good things."

With his long history in coffee, from a first gig at Starbucks to opening the erstwhile Steady Hand Pour House in Emory Village to running the coffee program at Empire State South, Donchey has become very intentional about flavors and sourcing. The new Toco Hills location includes two George Howell varieties from Guatemala and Colombia as well as Ethiopian beans from Intelligentsia. "It's like growing a friend base," he says. "We know and love the roasters that we work with and want you to as well. The fact sheet on varieties, sustainability, and price are great; but we're here to spread the love of coffee."

SLOW PITCH: Spiller Park serves carefully-sourced pour over coffee and a number of other locally-inspired treats.Robby Simon
Perhaps the shop's most Atlanta offering is the Cola-Cocktail ($5.50), a tumbler of assam tea syrup made in-house then filled with Coke and spiked with a shot of espresso. The caffeine bomb is then poured into a mason jar and finished off with coconut cr̬me infused with star anise to create a Milky Way effect. Toast by Hugh Acheson is not a side item, but MVP of the menu, whether it's served with jam or nut butter and figs.

On its soft opening day back in September, the new Spiller Park donated all proceeds to the Houston Food Bank in support of Hurricane Harvey relief, raising over $1,000 in just five hours. That's just the kind of business model Donchey believes in. "Part of connecting with the community is always being active in charity work and giving our time to the public," he says. "That's part of being gracious for someone paying for a cup of coffee."