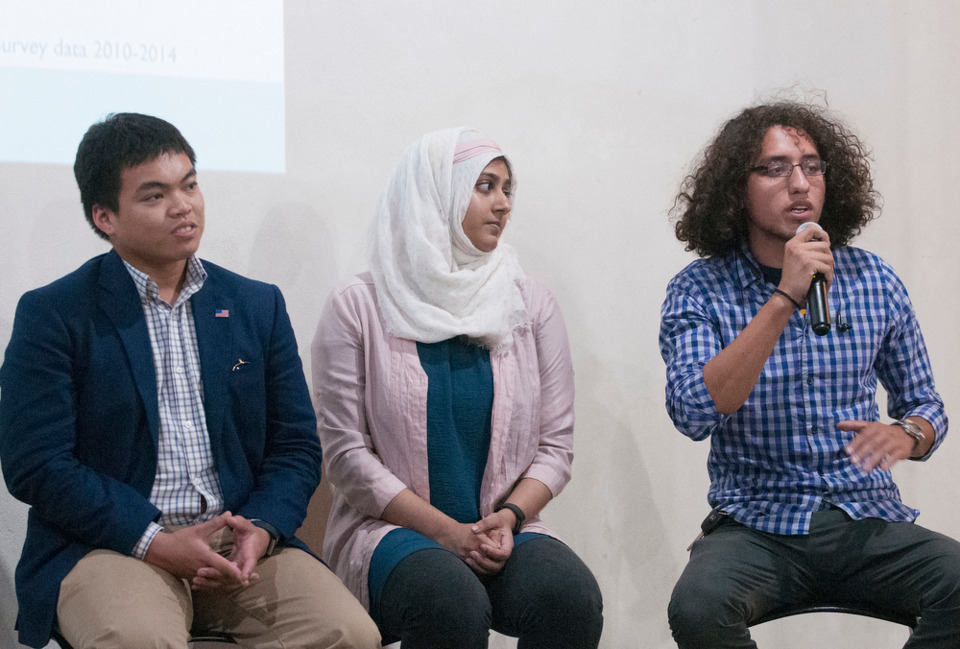 Photo credit:
Following President Donald Trump's election, his promise to build a wall bordering the United States from Mexico and rising sentiments of xenophobia across the country, celebrating Immigrant Heritage Month has become even more important in 2017. First celebrated in the United States in June 2014 and officially recognized by former president Barack Obama in 2015, Immigrant Heritage Month aims to commemorate the country's rich immigrant history and to acknowledge the deep and positive impact immigrants continue to have on the nation today.Home to almost a million foreign-born individuals, Atlanta continues to be a destination for immigrants in the South. In 2013, the Atlanta Regional Commission reported that more than 13 percent of the city's population was foreign-born, and this year's "A Day Without Immigrants" campaign reportedly halted large parts of the city. To celebrate and support immigrants in Atlanta and across Georgia, Creative Loafing has compiled a list of events throughout the month of June dedicated to supporting immigrant and refugee populations.On Thurs., June 15, the Georgia Undocumented Youth Alliance (GUYA) and other undocumented students in the state of Georgia will continue their fight to grant Deferred Action for Childhood Arrivals (DACA) recipients in-state tuition in Georgia. DACA declares that certain undocumented people who arrived in the United States as children hold lawful presence and cannot be deported. In Georgia, DACA recipients have been barred from receiving in-state tuition. The [https://www.facebook.com/events/1722082594756728/?acontext={"source":5,"page_id_source":118712551540971,"action_history":{%22surface%22:%22page%22,%22mechanism%22:%22main_list%22,%22extra_data%22:%22{\%22page_id\%22:118712551540971,\%22tour_id\%22:null}%22},"has_source":true}|In-State Tuition Court Hearing and Press Conference] is the fifth court hearing regarding the In-State Tuition Lawsuit against the Georgia Board of Regents filed on Aug. 1, 2013, and will potentially decide the future of many DACA recipients. Free. 9:30 a.m. Thurs., June 15. Supreme Court of Georgia, 40 Capitol Square S.W. www.facebook.com/guyaconnect.On top of dealing with resettlement and displacement, refugees in the United States must increasingly confront sentiments of xenophobia and discrimination. To gear up for World Refugee Day, the Center for Civil and Human Rights has partnered with the New Georgia Project to organize Refugees in America: Changing the Narrative. The community discussion will be led by American citizens who arrived in the U.S. as refugees and will tackle how persisting narratives of refugees in America can be changed. Panelists in the discussion include Awet Eyasu, a councilman for the city of Clarkson, Clarkson Mayor Ted Terry, as well as Francis McBayer, the director for Refugee Services. Free. 6 p.m., Thurs., June 15. Center for Civil and Human Rights, 100 Ivan Allen Jr. Blvd. N.W. 678-999-8990. www.civilandhumanrights.org.Celebrate World Refugee Day drinking delicious freshly brewed coffee at Refuge Coffee and supporting refugee-owned businesses in Georgia. The Coalition of Refugee Service Agencies (CRSA) and Refuge Coffee Co. have organized a [https://www.facebook.com/events/1350813358288632/?acontext={"source":5,"page_id_source":374074472770459,"action_history":{%22surface%22:%22page%22,%22mechanism%22:%22main_list%22,%22extra_data%22:%22{\%22page_id\%22:374074472770459,\%22tour_id\%22:null}%22},"has_source":true}|World Refugee Day Celebration] in Clarkston. CRSA is a coalition of 14 local refugee-serving organizations working to aid refugees and highlight their contributions to the state of Georgia. The celebration will begin at Refuge Coffee in Clarkston. After, participants will head to the city to show support for refugee-owned businesses. Free. 10 a.m. Sat., June 17. Refugee Coffee, 4170 E. Ponce de Leon Ave., Clarkston. 929-314-4837. www.crsageorgia.wordpress.com.How can African entrepreneurs overcome "the issues stopping young Africans emerging in the business and entrepreneurial market?" Africano 1.0, an event organized for African business entrepreneurs, examines this issue by ultimately providing Africans living in the United States with networking opportunities and resources for entering the business and entrepreneurial world. The event will feature speakers like Dr. Flavien Shirandi, Matilda Arhin and Rudy Mutombo, and will be followed by a soccer tournament with local African countries' teams created by Africans living in the U.S. Free. 3-10 p.m. Sat., June 17. Hammond Park, 705 Hammond Drive. 404-449-8061. www.neodigitalagency.com/africano.Are you a bilingual speaker looking to expand your career? The Latin American Association brings its 35th Annual Career Expo: Atlanta's Premier Bilingual Career Fair to help bilingual job seekers find employment with some of Atlanta's top employers. Almost 400 job seekers attended the fair in 2016, and they had direct access to corporations like State Farm, Home Depot, Wells Fargo, Zoo Atlanta and others. Free. 10 a.m.-3 p.m. Tues., June 20. Latin American Association, 2750 Buford Highway N.E. 404-638-1800. www.thelaa.org/events/career-expo.The I Am an Immigrant campaign has partnered with the Latin American Association and Lambda Theta Phi Latin Fraternity Inc. to bring its campaign to Georgia with I Am an Immigrant: Faces of ATL. One of the dozens of events throughout the United States celebrating Immigrant Heritage Month, I Am an Immigrant will highlight the work submitted to the LAA high school contest, "Portraying the Undocumented Experience," and will also include a fun photo shoot featuring the popular "I am an immigrant" T-shirts shown in the I Am an Immigrant campaigns. Free. 6 p.m., Thurs., June 22. Latin American Association, 2750 Buford Highway. N.E. 404-638-1800. www.iamanimmigrant.com/events/immigrant-faces-atl.