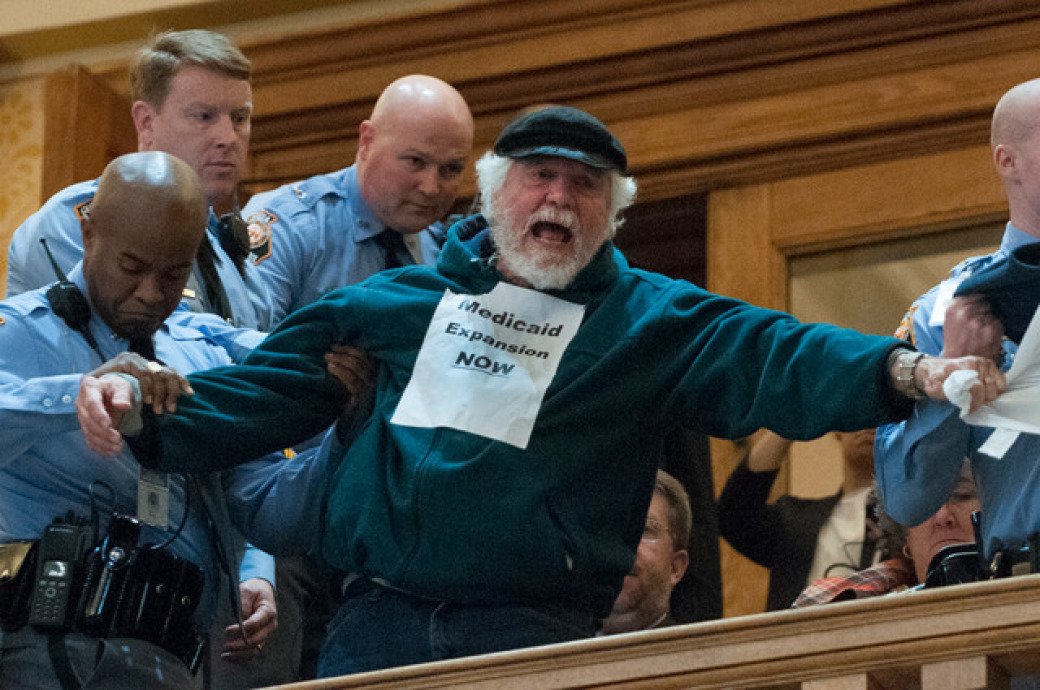 Photo credit: Joeff Davis/CL File
MEDICAID EXPANSION NOW: A demonstrator is arrested during a 2014 protest in the Senate gallery at the Gold Dome.
By Joeff Davis Wednesday November 8, 2017 08:51 pm EST

One of the more interesting results in national politics from Tuesday's elections was the passage of a referendum in Maine that expanded the state's Medicaid system, yielding the potential of an estimated 80,000 more people access to health care coverage. Maine is the first state in the country to expand Medicaid with a referendum vote, which passed by a sizable margin. The vote reversed five vetoes by Maine's Republican Gov. Paul LePage that prevented Mainers from benefitting from the Medicaid expansion in the 2010 Affordable Care Act bill, which gave states billions of dollars in federal funds to expand the reach of Medicaid programs across the country. A 2012 Supreme Court ruling allowed states such as Maine to opt out of the Medicaid expansion. Sound familiar?

Here in Georgia, Gov. Nathan Deal also refused to take billions of dollars in federal monies available through the Affordable Care Act. He said it would cost the state too much money never mind that in 2015 Georgia had more than 1.3 million people without health insurance (making it the third highest percentage of uninsured in the country). Studies have also shown that the billions of dollars in benefits provided by Medicaid expansion fast outweigh the millions of dollars in costs.

Deal and LePage are not the only ones against Medicaid expansion in their states. As of April, 17 other Republican controlled states continued to refuse the money to help take care of low-income citizens and assist them with basic health insurance. Who would Medicaid expansion help? The current system in Georgia provides assistance to families of three with incomes of only $8,985. Medicaid expansion would help the same family with an income up to $28,180, greatly expanding access to health care. The majority of people in Georgia who would have received assistance have jobs but don't have access to health insurance through their employers. This includes construction workers, food service workers, childcare workers, retail sales people, and of course freelance journalists. A 2017 study estimated Medicaid expansion in Georgia would help 463,000 residents get health care.

Maybe the Maine referendum will inspire governors such as Deal to reconsider? Don't hold your breath. 2018 is a Georgia election year, and Republicans, who have prevented Medicaid expansion, control the Legislature. Although Deal has budged slightly on his hardline stance against expansion, it is highly unlikely that 2018 will be the year the Gold Dome comes to its senses.

Republican strategist and former Deal spokesman Brian Robinson told CL the Medicaid issue "is one no Republican wants to touch in a legislative session right before a primary election." He continued: "But if Congressional Republicans can't repeal and replace the Affordable Care Act, and Medicaid expansion remains the law of the land, our position becomes more and more untenable in the years ahead. I think in the future again, if the current programs stays in place you'll see more red-state Republicans look for waivers that allow for more conservative approaches to expansion, such as work requirements, co-pay requirements, and limitations on how long someone can stay on the program." So to poor Georgians, maybe if you can wait just a little bit longer and stave off any health problems just another year or two like until after the next election the issue of Medicaid expansion, in our fair state, might finally be addressed. Sort of.