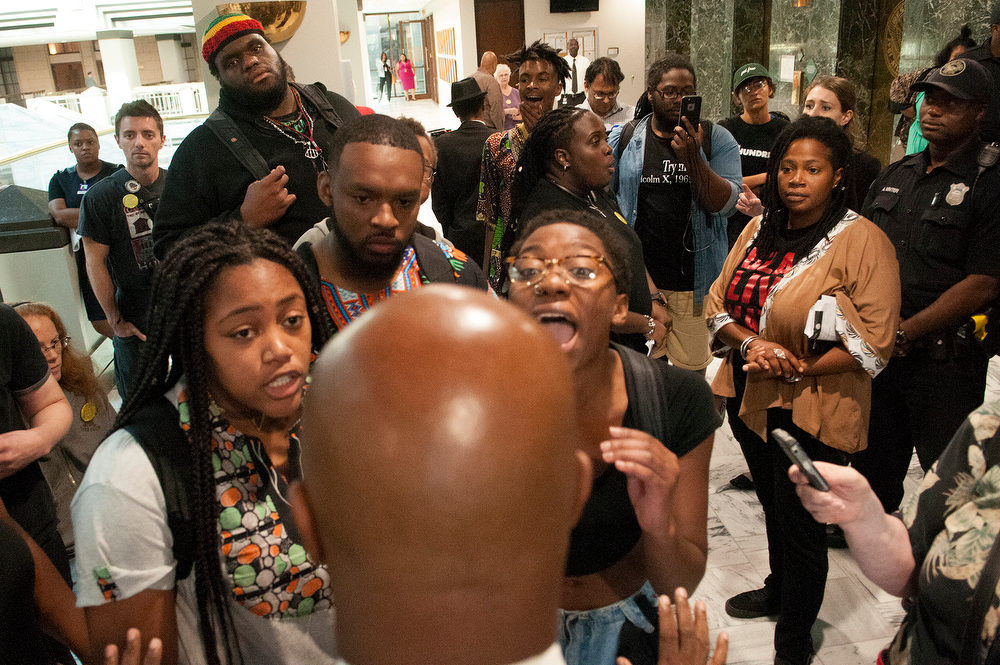 Over loud objections from supporters and activists, the Atlanta City Council signaled its growing interest in taking over the Metro Atlanta Task Force for the Homeless' controversial homeless shelter at the corner of Peachtree and Pine streets .

By a 13-1 vote, councilmembers approved a resolution that authorized the city to negotiate with owners for properties at three addresses including the shelter. If talks fail, the City Council can move ahead with condemnation.

Supporters of the Peachtree-Pine shelter feared the original draft resolution meant condemnation — a forced sale to the city. But the legislation does start the legal process for the city to take ownership of the facility that offers resources to hundreds of people but has also been beset with criticisms about its management and model.

Mayor Kasim Reed says he wants to use the property, which is surrounded by several vacant parcels and down the street from a proposed $300 million mixed-use redevelopment of the Atlanta Civic Center, as a headquarters for firefighters and the city SWAT team.

Activists and task force supporters, including some people who had stayed there, packed Council chambers to ask what is supposed to happen to the 500 or so people who stay at the massive shelter every night.

Marshall Rancifer, a longtime advocate for the homeless, told council, "I don't understand why you're trying to rush to close down the Task Force when you don't have a viable plan in place to house these folks. Where are you going to put the poor folks that have been refused entrance into any other shelter in the city because of their mental health issues, their addiction issues? Where are those folks supposed to go?"

The shelter has had plenty of critics. Reed is probably only the most prominent one. He has long talked about closing Peachtree-Pine and opening smaller shelters that link residents to services, like help finding jobs. He's said the shelter now is not changing peoples' lives for the better. He's accused it of being a hub for tuberculosis activity, of damaging the city, and the quality of life of people who live in that part of the city.

The shelter is also scheduled for a long-awaited day in court this month: it accuses several organizations of conspiring to drive away donors.

But faced with sometimes rowdy Peachtree-Pine supporters, council took up a piece of legislation that the city's lawyers said did not authorize condemnation, only to start talks over purchasing the property.

In one of the more heated meetings in Council chambers in the last 10 years, activists called for Reed to appear and questioned where Councilman Kwanza Hall, who signed on to the resolution, had gone during public comment. (Hall was discovered by one protester getting a bag of popcorn from the City Hall cafe. He apologized.)

Hall defended the legislation. The bill "does not allow anything to happen except for a negotiation. We do this on a regular basis," Hall said. Hall, who is expected to run for mayor in 2017, said he thinks there are better ways to address homelessness and the bill is just one more thing that needs to be put on the table. Speaking after the meeting, he said the city should explore other ways to reduce homelessness, such as employing people to fix blighted houses and potentially live in them.

Toward the beginning of the hearing, Councilwoman Felicia Moore said she had yet to see either a plan for the people who are now in Peachtree-Pine, nor any study on the feasibility of a public safety facility on the site. She said she wouldn't be supportive of the legislation because she believed in having the information at the beginning of the process, not the end.

Anita Beaty, the executive director of the Metro Atlanta Task Force for the Homeless, which runs the Downtown shelter, used her few minutes of testimony before council not to plead for the shelter itself, but to accuse Atlanta of driving people to homelessness in the first place.

"The policy of the city right now is gentrification," she said. "There is no proactive affordable housing policy to develop housing that targets ... people who work at minimum wage. We have to target the workers who are serving you, serving all of us. Wherever we go, we are being served by people who make slave wages in this city and they are hanging on by their teeth," said Beatty.

Critics of the bill brought heat for more than an hour. They accused Atlanta of being being too busy to care and of rushing to close a shelter in a city that doesn't have enough shelters just as the weather's getting cold. Tiffany Roberts, a Black Lives Matter Atlanta activist, asked the council members how they can take months to decide on things like body cameras for police but quickly hear a bill that she said could put vulnerable people on the street.

"With it closed may the blood of every one brutalized by the police because they're not indoors be on your hands," Roberts said.

After Council approved the resolution, protesters continued chanting "shame" and interrupting proceedings, prompting Council President Ceasar Mitchell, who had allowed protest during public meeting but warned activists about cursing, to request officers to remove them. Speaking after the resolution was approved, Mitchell told CL that some of the concern could have been addressed if the city had better communicated details about the negotiation and plans for the shelter.

"We've got to close the gap between this issue of what may happen with Peachtree-Pine and what the alternative service arrangement will be for homeless men and women who use this shelter," he said.

No value assignedOne protester whose name could not immediately be confirmed was arrested outside the Council chamber and charged with violating the rules of conduct in City Hall. Task force supporters faced off with Hall and police after the man was detained and, according to protesters, transported to the city jail.

During the meeting, Councilman Alex Wan said a bill was being drafted at that moment that would address transitions for people now in Peachtree-Pine. At the end of the meeting, council passed a resolution saying that if negotiations are successful, then prior to a sale, the city will adopt a transition plan for "eligible" residents and patrons of Peachtree-Pine.

However, a spokeswoman for Reed said during the meeting that there's a plan in place to help people in Peachtree-Pine and council's action was simply formalizing it.

"United Way of Greater Atlanta and the community of homeless service providers in the city have already established a plan to serve the individuals and families staying in the shelter, which includes to triage individuals and families to the most appropriate housing intervention," said Jewanna Gaither in a written statement. She said the assistance would include immediate shelter, longer-term housing and "responsible family reunification." Gaither also said the little shelters were not a "replacement" for Peachtree-Pine: "It’s not a model we want to replicate or replace."

Reed has said he's thinking about financing through a "homeless opportunity bond" — that is, taking on debt and using the money for homeless facilities or services. Details about any bond have yet to be publicized. Gaither on Monday said it was "too preliminary to discuss funding options."


The city has proposed redoing a building on Metropolitan Avenue in Pittsburgh as transitional housing, a plan that's unpopular with plenty of residents. That property "is still being considered for a small, supportive interim emergency shelter for families, particularly with a preference for Pittsburgh homeless families," said Gaither.

If any of this is to be part of Reed's legacy, time is running out. He's term-limited, and a new mayor will be elected next November. A city attorney told councilmembers on Monday that negotiations regarding Peachtree-Pine are expected to last from 30 to 60 days. Beaty, speaking after the meeting, said she put that timeframe more at "years."