Where to eat and drink during Atlanta Pride Weekend 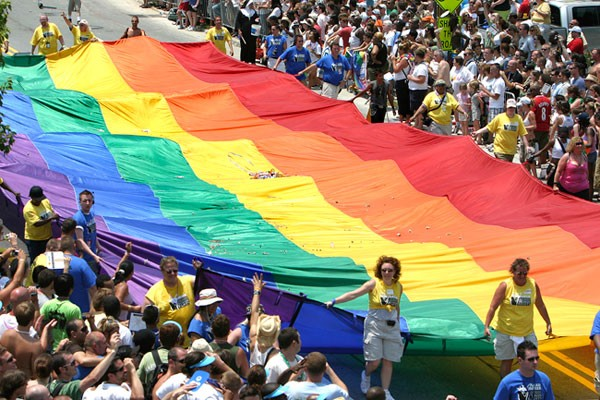 The Atlanta Pride Festival and Parade are returning to Midtown for their 46th year, bringing approximately 300,000 people together for another round of LGBTQ celebration. Not to brag, but Atlanta's is the largest Pride event in the Southeast (holla!) and we are a city that knows how to party. Amidst the influx of people celebrating love in all its forms, keep your stamina up with some of these Pride-friendly wining and dining experiences.

Einstein’s - Enjoy local and organic ingredients cleverly combined into Southern comfort-style cuisine for brunch, lunch, or dinner on the patio amidst the Pride vibes of Midtown's heart. Buttermilk pancakes dressed in fruit and plates of fritters are paired with drink specials all day, every day, including $7 Deep Eddy martinis and $3 shorties. 1077 Juniper St. N.E. 404-876-7925. einsteinsatlanta.com.

10th & Piedmont - Conveniently located on the parade route and down the street from Piedmont Park, 10th & Piedmont boasts a notorious brunch experience with their vodka flights and quirky cocktail menu. An avocado martini might be just what’s needed to cool down between festivities. Bottomless mimosas are also an option for $15.95. 991 Piedmont Ave. 404-602-5510. www.communitashospitality.com/10th-and-piedmont.

Henry’s Midtown - If the lavish outdoor patio isn’t reason enough to stop by Henry’s on a normal day, the fact that the restaurant overlooks the entire stretch of 10th Street should make it a prime location this weekend. Watch the parade with a bottomless mimosas in hand while brunching on three different kinds of benedicts and a guacamole cheeseburger. While Piedmont Park won’t allow dogs inside during the festival, Henry’s welcomes them with open arms. 132 10th St. 404-537-4477. www.henrysatl.com.

Woody’s Famous Philadelphia Cheesesteaks - Don’t worry about having to go far for somethin’ cheesy. A true Atlanta gem, Woody’s Cheesesteaks lies just beyond the sidewalks of Piedmont Park, and has since 1975. Their 1/3 pound chopped Angus beef layered in gooey-ooey cheese between two fluffy loaves will fuel late night partiers until 4 a.m. on Friday and Saturday, and Sunday until midnight. 981 Monroe Dr. N.E. 404-876-1939.

Woof’s on Piedmont - Not one, but three days of Pride await at Atlanta's self-proclaimed "only gay sports bar." Woof's boasts 27 TVs for almost 360-degree action. On Friday, Absolut will be in attendance from 7-9 p.m. with free giveaways, an open patio, and all the vibes to get Atlanta Pride Weekend bumpin’. On Saturday, crack a cold one for the Dawgs as Woof’s simultaneously celebrates Pride, football and beer with Miller Lite specials from 4 p.m. to 9 p.m. And for the parade on Sunday, they'll be serving up $5 Smirnoff vodka drinks all day long. 2425 Piedmont Rd. N.E. 404-869-9422. woofsatlanta.com.

Livingston Restaurant + Bar - Brunch never gets old at this sleek and glamorous eatery, located in one of the city's few historic buildings. A usual spot for Atlantans looking to eat, drink, and celebrate, Livingston will host their brunch on Sunday with a special show by DJ Yvonne Monet starting at 11 a.m. VIP tickets include a drink and guaranteed terrace seating. $28-$75. 659 Peachtree St. NE. 404-897-5000. www.livingstonatlanta.com.

Empire State South - Celebrate Atlanta Pride and a victorious year for LGBTQ equality in Georgia at the 15th Annual Human Rights Campaign Atlanta Pride Brunch on Sunday. Guests will be treated to two hours of complimentary cocktails and a Southern brunch catered by Empire State South featuring eggs, meats, and cheeses galore. (Did we mention the bottomless mimosas?) Arrive on time to get a good seat on the patio. With the parade starting at noon and heading right past the restaurant, these are sure to be some of the hottest seats in the city. Buy tickets here. $75-$125. 10:30 a.m.-2:30 p.m. 999 Peachtree St. N.W. 404-541-1105. www.empirestatesouth.com

Food and beverage happs around the city | more...

No value assignedKimberly and Van Martin have no professional culinary background. Van is a digital and design project manager, while Kimberly is an accountant. Married in 2006, the pair moved to Decatur two years later and have been there ever since.

Always fond of all things organic, Kimberly began cooking seriously in the late ‘90s while in college. “For me, it was all about starting...

We might not be near the beach, but you can pretend you are at one of these tropical-themed watering holes | more...

Food happs | more...
Search for more by Savannah Elder
[Admin link: Where to eat and drink during Atlanta Pride Weekend]

Spider for Where to eat and drink during Atlanta Pride Weekend