South Downtown, already flush with parking lots and decks, could see even more 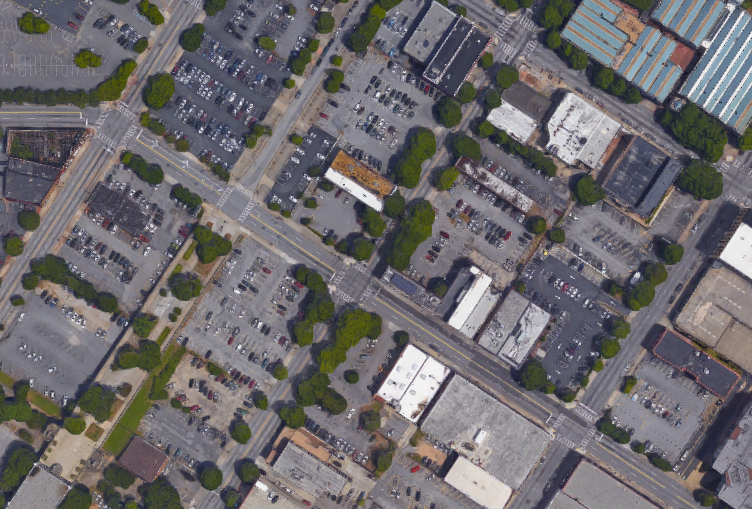 Photo credit:
South Downtown doesn’t have enough housing, retail, or non-government offices. But it’s got plenty of parking. Lots of it. Just walk around the Garnett MARTA station. Now city officials say the neighborhood south of Marietta Street needs even more, putting it on the path to become a bona fide parking-deck district.

City Hall says there already aren't enough spots for steel boxes. When existing parking facilities at Underground Atlanta parking decks and Turner Field are no longer available, the need will be even greater. The city must find alternatives, says Jalal Slade, a senior policy advisor to Mayor Kasim Reed, and sooner is better than later.

Earlier this week, an Atlanta City Council committee gave a thumbs up to hiring a consultant to prepare a feasibility study — plus construction documents — showing how to increase the number of parking spaces for City Hall’s 2,000 employees who work in South Downtown and visitors.

Slade, speaking to Council’s Finance and Executive Committee, said the city is currently looking at a deficit of up to 600 parking spots. Some employees’ parking areas get shifted to manage the demand.

“We’re playing this musical chairs game but what we're not doing is making a decision to increase capacity some place centralized to relieve pressure,” he said.

Slade said some city employees who use the Underground Atlanta deck will need another option when WRS, a South Carolina developer currently in talks to purchase the subterranean shopping mall, closes on the property. Fulton County employees who park at Turner Field and ride a shuttle to the county Government Center will also be hunting for spaces when Georgia State University and Carter redevelop the ballpark and its massive parking lot. That’s Fulton’s problem to solve, however.

“We want to get ahead of this,” Slade told councilmembers. “It will take 18 to 24 months to design and build anything.”

Councilmembers voted 6-0 to recommend full Council approve the deal, which calls for Atlanta Services Group, a joint venture, to prepare “construction documents and design development standards.” The resolution does not allocate cash to build the parking decks, however.

Neighborhood and urbanism advocates, including ThreadATL, quickly questioned the long-term vision and potential impacts of the proposal. ThreadATL’s Darin Givens, speaking with Kyle Kessler, a South Downtown resident who oversees the Center for Civic Innovation’s initiative to boost the area, said the city is missing an opportunity to capitalize on public transit in the area.

“We should be taking advantage of the heavy-rail MARTA infrastructure that’s in place as well as the numerous MARTA and commuter bus lines,” Kessler told Givens. “There is no location better-equipped for less employee parking than South Downtown.”

Givens also wonders why the city, which has signaled it's serious about tackling affordability, is proposing adding parking levels to the Central Avenue deck and not housing units, which the structure was engineered to accommodate. In addition, a Georgia Tech study requested by Planning Commissioner Tim Keane envisioned the surface-parking lots around Garnett station to be redeveloped as places for people, not cars.

Givens says Central Atlanta Progress, the business group that works to improve Downtown, has already commissioned a neighborhood parking study. He argues the city should wait until the results are complete to evaluate the actual need.

“South Downtown has been struggling for decades to overcome the damage to its urban fabric by these parking deserts and dead spaces,” Givens writes. “The city should be repairing that damage in a forward-thinking way that embraces the newest and best ideas for good urbanism in historic street grids and near transit. Instead, it looks like we may be getting more of the same thing that’s defined its blightedness.”

Where to hike ITP in Atlanta Article

Explore the outdoors and commune with nature without leaving town | more...

Plus, a massive redevelopment opportunity awaits in Decatur | more...
Search for more by Thomas Wheatley
[Admin link: South Downtown, already flush with parking lots and decks, could see even more]