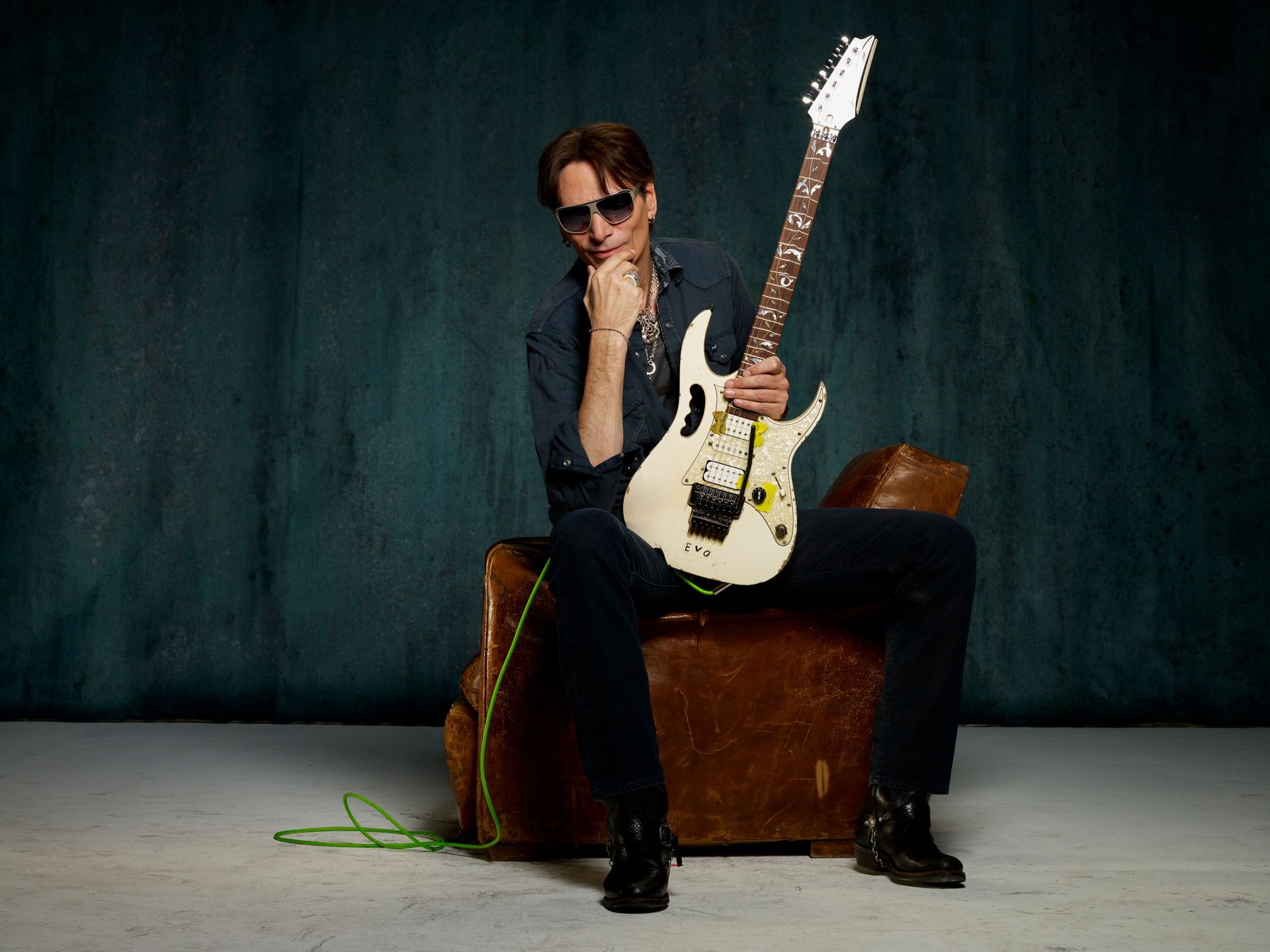 At the tail end of the 1980s, a decade known for guitar virtuosity, Steve Vai released what could be regarded as the testament of guitar theatrics and wizardry, Passion and Warfare. Vai spent the early 80’s working with Frank Zappa, and he released his first solo album, Flex-able, in 1984. Between these first two solo records, he spent the time lending chops to a recently gone-solo David Lee Roth and Whitesnake, respectively.  During this period, there was much material that ended up on what Vai refers to as the “infinity shelf.”  In order to celebrate the 25th anniversary of Passion and Warfare, Vai dug into the infinity shelf and found unreleased material recorded between Flex-able and Passion and Warfare to come up with an entirely new album called Modern Primitive.  Vai is currently on tour performing Passion and Warfare in its entirety for the first time ever. Before bringing the show to Variety Playhouse tonight (Tues., Nov. 29) Vai took a few minutes to talk about pulling together the tracks for the new album, recording at home, musical and traditional meditation, and some of his Alien Guitar Secrets.

Modern Primitive features unreleased material written between your first and second solo albums. Was tracking already complete or did you have to rework them to some degree?  How did you decide which songs you wanted to use?

Well, there was maybe about a dozen or so actually tracked, but I only chose about six or seven because they’ve been haunting me for the last thirty years (laughs).  I kind of knew for the most part which tracks I was going to put on there.  I wasn’t sure which ones written around that period I was going to start from scratch and build and record because there was so many.  For instance, “Pink and Blows Over,” which is three parts at the end of the record, that was a piece we used to play with the Classified over 30 years ago. I was sitting there contemplating, “hmmm, should I tackle this?” because it’s huge. But it’s such an eclectic, esoteric kind of piece that I had to do it. I’m very happy with the way it turned out.

You recorded your first album Flex-Able, and presumably some of Modern Primitive on a Fostex 8 Track machine?

Well I originally started with a TEAC 4-Track, and was bouncing tracks back and forth, back and forth. But when I discovered this Fostex quarter inch 8-Track, that was like opening a room without a roof on it for me, you know? That’s where I decided to re-record everything and really get forensic, because before that my recording and engineering chops were for crap. I would just splosh stuff down and move on. And then I would listen, and think, “Why doesn’t it sound good? It sounds so amateur.” And then I’d go up to Frank’s Zappa house and record with him and see how he was doing it, and everything had to lock, it had to be in tune, and it had to be musical. So that period with Frank was unbelievably educational and that’s when I decided to re-record Flex-Able with the 8-Track. Lock it and make it sound good.

So in the mid-’80s, you were recording and engineering your music at home by yourself rather than going into a studio?

I engineered, produced, and recorded all of my records. The only thing I don’t do is master.  Every time I would buy a new recording machine, whether it was the Fostex, the next was a 24-Track 3M machine, the next was a Studer, I would always have a custom footswitch made that allowed me to punch in on the fly. So that’s how I recorded everything. It was unbelievably accurate, I could punch in on a 32nd note.

What is your current home studio, the Harmony Hut, like?

Oh it’s beautiful. My favorite mic pre’s are API. My console that I had at the Mothership was a beautiful API, but they’re just really finicky and they take a lot of maintenance. So I had a custom console built that has 32 channels but there’s two sides to it. The first 16 has two rows of 500 series slots so I can put any kind of mic pre’s in it. There’s some really great ones being made. Also, there’s slots for any of the other 500 series modules like eq’s and compressors.  That’s nice, that gives me great flexibility. On the other side, it’s fitted for the 1073 size Neve models. The Brent Averill Neve’s are really the superior ones, for me at least. It’s a completely class a console built by Tree Electronics, which is Steve Furlotte. All the outboard gear is authentic analog high end stuff that you could find in any conventional top class studio in the ’80s. I do basically everything analog in front of the recording workstation and then I go into Pro Tools. And we’ve experimented with a tremendous amounts of converters to find what works best. It’s a nice studio, I get good sounds there.

Can you elaborate on your Musical Meditation concept?  Is that something you still put into practice?

Oh yeah. Anybody that does anything effectively puts it into practice whether they know it or not. Musical Meditation, when I refer to it, is the focus on what you’re doing without any distractions. And it’s a focus that doesn’t involve thinking, it’s just an intense attention on what you’re doing. And when you’re in that state, your instincts will arise in you as impulses, and then you just move with them, as opposed to thinking. It’s a very relaxed state of awareness and then what happens with what you’re doing, it transforms in a different way than if you were approaching it on an intellectual level. There’s a place for that too, but really, nothing can compare to the uniqueness, the freshness that arises from your instinctual impulses in the moment. Does that make sense?

For instance, improvising, it’s about just being aware. If you’re listening, you’re not thinking.

It’s like a sixth sense, you’re letting ideas flow through you rather than relying on muscle memory and technique.

Yeah, and it’s a process of trusting those instincts. It’s hard because there’s a lot of screens in the way. Screens are mental constructions and thoughts, that have a tendency to throw you off track.  Sometimes when I teach, I mention if you take just one simple thing, maybe it’s a riff, maybe it’s a song, and you just give it your attention, after a while you don’t have to think about where your fingers need to go and then your ability to be psychologically invested in what you’re playing deepens. That’s when you have access to your own unique creativity as opposed to pantomiming the unique creativity of somebody else which you really can’t do effectively.

So is it different than regular meditation because you are active and playing music, but at the same time, there are similarities?

Yes, well, aspects of it are the same. The non-thinking awareness is the part that’s the same.  Because if you’re sitting in a dark room with the lights out, meditating, you’re watching the thoughts going through your head, you’re not buying into them, you’re becoming present with your own consciousness. You’re putting your intention on your own awareness. That’s the purpose of meditation, because when you go there that deepens and you start to have realizations that are more of an inner-knowing than a belief. A belief is a thought in your head (laughs), but a knowing is something deeper that you don’t even need to discuss, it’s a very intuitive understanding of something. In that case, whether you’re playing, or cooking, or even having a conversation with someone, there’s an element in it that can be very meditative. It’s like listening to somebody without thinking. And then even the responses that come out of your mouth will be instinctual and will arise in the moment. Conventional meditation can be inward-looking, but the important thing is to take that meditation into your life. It affects everything you do, it affects the quality of all your creative output, it affects the quality of your relationships, your choices, it’s powerful stuff.

You teach guitar workshops known as Alien Master Classes.  Would you mind sharing with Atlanta an extraterrestrial anecdote?

Conventional master classes talk about technique and theory and I can talk about that at times, but my life experiences as an independent musician have shown me various things that were vital in the evolution of my craft. What I talk about mostly in my classes is the quality of your thoughts and what your perspective is on what you’re doing, what your goals are, what your attitude is on the music business, the people around you. These are the kinds of things that really are the powerful forks in the roads. When I was going to Berklee, there were so many musicians that just floored me, they dwarfed me in regards to technique, understanding of music, inner ear, all this stuff. Some of them are dead, overdoses and stuff, and many have just taken up other jobs or are struggling in little bands and none of that really is telling of the degree of happiness, but I’ve seen people that I thought could be more successful at manifesting their dreams but aren’t.  And I discovered it was because of their perspective. It was usually very negative, very critical, and you know that’s what you’ll get if that’s your perspective. So I’ve realized that your perspective is really the most important thing. And that’s what I try to get through, and that’s what I discuss in the master classes. And you know, of course vibrato and bending notes or anything that anybody’s interested in (laughs).