The secret club brings the magic back to live music 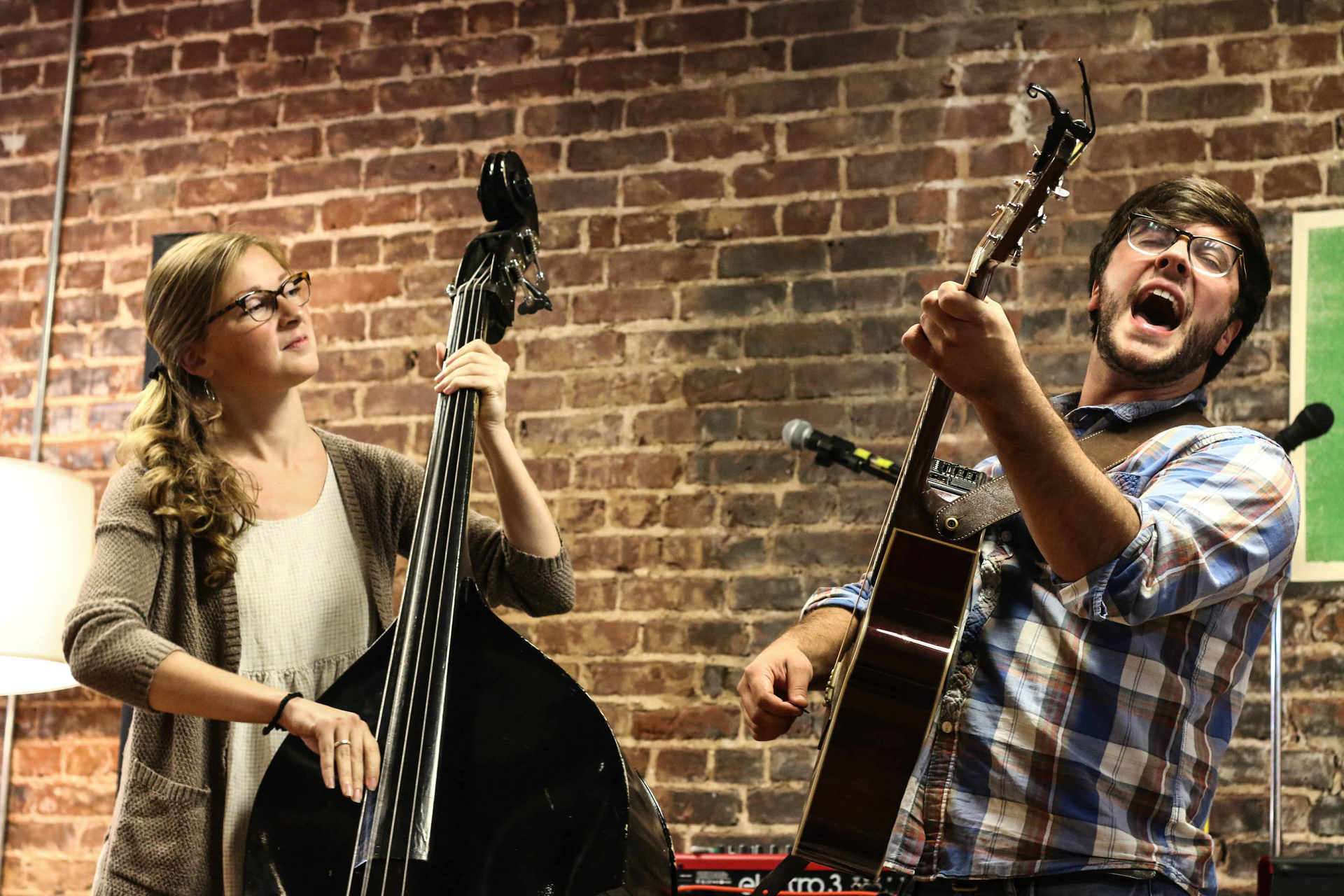 Holly Kent lingers at the front of a brick-walled office loft on the fourth floor of the M. Rich Center in Downtown Atlanta. A crowd has settled onto a few couches near the back of the room. Others sit rigidly in rows of white plastic chairs, mingling and sipping beers and mixed drinks they’ve brought with them. The room is home to Iron Yard, a software engineering and three-month coding school that typically is abuzz with programmers taking the first few steps in starting their own businesses. But on Nov. 17, the common space in the Iron Yard’s office set the stage for Sofar Sounds, an intimate monthly gathering that puts on a live musical performance in a different, nontraditional space for each show — sometimes even in people’s living rooms or kitchens.
Sofar Sounds was born in London in 2010 to foster an intimate listening experience that’s free from the distractions of the typical concert experience (e.g., people texting, talking, and taking a barrage of phone pics). Each monthly show functions like a secret, underground music club where the emphasis is always placed on creating a pure listening experience. Over the last six years Sofar Sounds shows have appeared in nearly 300 cities around the globe. The rules are simple: Guests must create a profile on the website. From there they can apply to attend a show in any city where a Sofar Sounds event is happening. The size of the crowd is limited to between 30-60 attendees, depending on the size of the venue. If given a spot on the list, attendees must stay for the entire show — Atlanta shows typically end around 11 p.m. — and there is no talking allowed during the performance. Sets are kept to 20 minutes with a short break between each band. The address of the venue is revealed the day of the show, and who is performing is revealed only minutes before the acts take the stage.

Sofar Sounds shows are secretive, but they are by no means exclusive. “It’s not like Fight Club,” Kent says. “Please tell all of your friends about it.” Kent volunteers with Sofar Sounds Atlanta as the events’ emcee, and works in conjunction with the shows’ current promoters Katrina Merto and Maria Sotnikova. Others promoted Sofar Sounds shows before they became involved. In February 2017, Sofar Atlanta turns four years old. For November’s show, Miami-based songwriter Alejandro Elizondo performed alongside Atlanta-based alternative rock outfit Paper Lights and folk-Amercana duo City Mouse. Each group set the mood for a night of shimmering and rustic pop tones for a rapt audience. Half of the audiences members are Sofar veterans — people who’ve attended the shows before. The other half are first-timers. Everyone is invited via email which allows them to RSVP. If an invitee doesn’t RSVP they lose the spot. The minimum reservation rate is $5, and everyone gets a plus one. The musicians who are invited to perform are a mixed bag of up-and-comers who’ve established themselves within their local music scene, but are still working their way up. Lindsey Owings, campus director of the Iron Yard, first encountered Sofar Sounds in October when a friend invited her to a show. She was so moved by the experience that she reached out to set up the next show at Iron Yard. “I have gotten away from going to really big concerts,” Owings says. “I don’t get connected to the music quite as much. So to be in an intimate concert setting where you’re up close and personal with an artist but you’re also mingling with people in a community is a really cool concept.” From the moment City Mouse eased into its first few notes at November’s show, a palpable sense of community and dedication filled the air. “In a lot of places, people are just there to drink or to see their friends, or because they walked by,” says Jenna Mobley, who sings and plays violin and stand-up bass for City Mouse. “If you come to a Sofar Sounds show, you’re there because you want to listen to live music.”
Other acts who have performed SoFar Sounds’ Atlanta shows include an array of artists including OK Cello, Adron, Lily and the Tigers, and Oryx + Crake. The lineup for each show generally focuses on acoustic musical performances, but the format is open. “We’ve had a slam artist, an Argentinian tango, a cellist, and we’ve had folk artists,” Kent says. “You know, walking into that space, wherever it is, that all those people have at least one thing in common with you: a love of live music. ... And they enjoy the experience as much as you do.”


The next SoFar Sounds show is set to go down Dec. 15. RSVP for details.

Spider for The story Sofar