'Wonder Woman' challenges superhero conventions with a sword and a smile 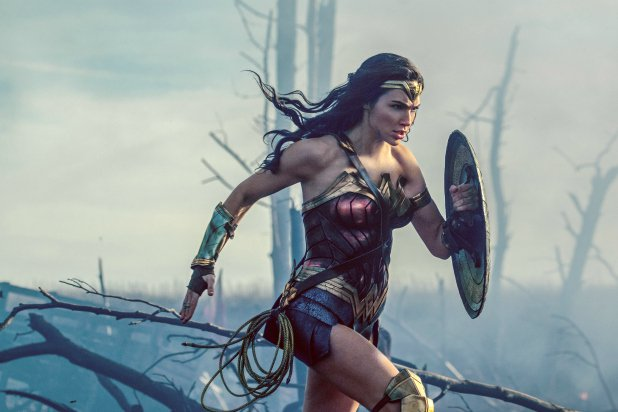 Photo credit:
Itbs like a bad joke that Warner Brothers and DC Comics must rely on a woman to clean up their mess.

But over the past decade, the companies have struggled to make superhero movies that match Marvelbs mass appeal. After the failure of Green Lantern to lighten up DC's films, the company doubled down on dark, edgy and ultimately dreary takes on comic book characters. While Batman v Superman and Suicide Squad met the low end of financial expectations, theybve been reviled by most critics and fans.

Now theybre pinning their hopes on Wonder Woman, following the Amazon Princessb scene-stealing turn in Batman v Superman. The heroinebs first feature film since her 1941 debut, Wonder Woman has some conspicuous flaws but pulls the superhero series out of its creative tailspin to clear the admittedly low bar of being the most entertaining DC movie since 2008bs The Dark Knight.

Following a framing sequence with Diana Prince (Gal Gadot) in present-day Paris, the film flashes back to her childhood on Themyscira, enchanted island of the Amazons. The only daughter of Queen Hippolyta (Connie Nielsen), Diana grows up to realize that even among ageless warrior women, she has extraordinary abilities.

The outside world makes a rude entry when a crashing plane breaches Themyscirabs mystic barrier. Diana rescues the pilot (Christopher Pine) and smiles at the realization that hebs the first man shebs ever met. The Amazonsb magic lasso forces him to confess that hebs spy Steve Trevor, holding crucial information about German chemical weapons that could prolong The Great War. Diana believes that the all-consuming global conflict is the handiwork of Ares, god of war and the Amazonsb historic adversary.

Diana defies her mother and returns Steve to the male-dominated world of the early 20th century. Wonder Woman finds light comedy in Dianabs fish-out-of-water qualities b shebs more nervous facing her first revolving door than a German machine gun. Despite her formidable strength and intellect (she speaks dozens of languages), she has a girlish naivetC) about human nature and social conflict. Shebs convinced that if she finds and kills Ares, the war will end, while the more cynical Steve tries to head off her inevitable disillusionment.

Gadot affectingly conveys Dianabs empathy as Wonder Woman casts a fresh light on a superherobs motivations to fight injustice and allay suffering. This theme culminates when Diana goes to the frontlines and, revealing her signature costume for the first time, charges across no-manbs-land in the face of enemy fire. Not just a stirring action scene, the sequence has iconic force, a symbol of feminine pacifism challenging the ugly rapaciousness of war. The set piece helps justify the scriptbs decision to change the characterbs originshttps://soundcloud.com/the-comics-canon/episode-34-the-wonder-woman-episode" rel="external">comic book origins from World War II to World War I.

Director Patty Jenkins, who helped secure Charlize Theron an Oscar with Monster, appreciates that star power can be the most effective cinematic superpower, and makes the most of Gadot and Pinebs charisma and chemistry. The story may be encumbered with exposition and globetrotting, but itbs willing to slow down and enjoy Diana and Stevebs flirtations, whether in a grotto, on a sailboat or at a liberated village. Pinebs Steve Trevor maintains a roguish charm while striving to treat Diana as an equal partner.

Wonder Woman succumbs to some of the problems that can bedevil big superhero movies, including dodgy special effects and a muddled third act unpleasantly reminiscent of director Zack Snyderbs DC work. As one of the primary villains, Danny Hustonbs German general seems utterly generic, although Elena Anaya has a memorable turn as a masked, deformed creator of chemical weapons.

But amid the explosions and superfluous characters, Jenkins, Gadot and company seem inspired by more than the productionbs commercial imperatives. They seem to want to do right not just to Wonder Woman as an enduring role model, but to the rare opportunity of a superhero film starring and directed by a woman. If not entirely transcendent, Wonder Woman proves strong enough to shatter the genrebs glass ceiling.