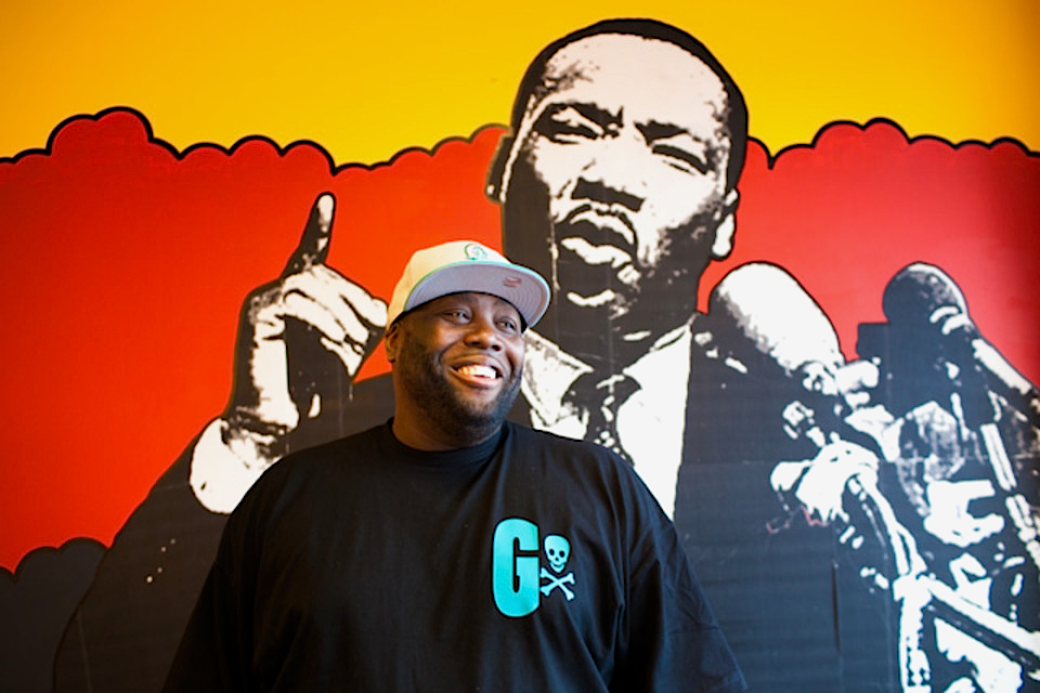 Photo credit: Dustin Chambers/CL File
SON OF A GUN: Killer Mike has come under fire recently for an ill-conceived interview with NRATV.
By Jewel Wicker Sunday April 1, 2018 10:35 AM EDT

“We’re here to make people mad,” Killer Mike jokes at the beginning of an interview that has indeed done just that.

On March 24, a clip of an interview between the Atlanta rapper and activist, and NRATV host Colion Noir was released on social media as student-led protests took place around the country in support of gun reform. According to Killer Mike, born Michael Render, the interview was filmed more than a week before the nation-wide March For Our Lives rally, and was intended to discuss black gun ownership. Despite his intentions, criticism ensued as a result of the clip, during which he states that he wouldn’t allow his kids to participate in school walkouts for gun reform.

"I told my kids on the school walkout, I love you, if you walkout that school, walkout my house…we are not a family that jumps on every single thing an ally of ours does because some stuff we just don’t agree with.” -@KillerMike #MarchForOurLives pic.twitter.com/Gx8JLntmZ8

The social media clip is preceded by an intro from Noir. “So, I have to ask. What are you really marching for,” he says. “Because from where I’m standing, it looks like a march to burn the constitution and rewrite the parts that you all like in crayon.”

Mike was heavily criticized on social media for his remarks in the clip and his decision to share his thoughts on a platform created by the National Rifle Association. Advocates for gun reform have a host of issues with the NRA, but even supporters of the Second Amendment have criticized the organization for not advocating equally for the rights of people of color.

Shortly after the backlash ensued, Killer Mike issued a video on the controversy and March for Our Lives, referring to the demonstrations as a “noble campaign” that he is in support of.

I hope this clears some stuff up. Love and Respect to all. Part 1 pic.twitter.com/pq977HEG7A

“I’m sorry that an interview I did about a minority, black people in this country, and gun rights was used as a weapon against you guys,” he says. “That was unfair to you and it was wrong, and it disparaged some very noble work you’re doing.”

Days after Mike issued his apology, the full version of the NRATV interview was released.

It is true that for much of the 42 minute interview, Killer Mike focuses on black people’s rights to bear arms. He also pushes for black gun owners to “flood [the] ranks” of the NRA if they’re unhappy with the leadership and talked about his issues with allies who protest gun reform but remain silent on issues such as the 13th amendment, which allows slavery or involuntary servitude as a punishment for people who have been convicted of crimes. He also warned black people not to rush to support causes like they did when they supported drug policies such as mandatory minimums that imposed harsher sentences on crack cocaine users than people who used powdered cocaine, resulting in minority offenders receiving more time than white offenders.

Outside of advocating for the Second Amendment and supporting presidential candidate Bernie Sanders in the most recent election, Killer Mike has been a popular political voice in hip-hop. From songs such as 2012’s “Regan” to 2015’s “Early,” the rapper has used his music as a solo artist and as 1/2 of Run the Jewels to make fiery political statements. In interviews, he’s advocated for black-owned banks and spoken out against police brutality. Locally, he’s

Still, there is certainly some flawed and dangerous logic in Killer Mike’s interview with NRATV. At one point, he criticizes people who advocate for gun reform, saying “You can’t continue to be a lackey...You have never disagreed with the people who tell you what to do.”

Statements like this make no sense when you’re telling your kids they’ll be put out of your home if they decide to protest something because you disagree with it. Furthermore, claiming to be an “ally” of March for Our Lives protesters rings hollow when you won’t let your kids support the very things they’re fighting for. Finally, Killer Mike’s assertion that news organizations such as CNN and FOX News are equivalent to NRATV, a platform run by an organization that advocates and lobbies for gun rights, is simply, well, #fakenews.

These, among other things, are valid critiques of Killer Mike’s recent interview. Celebrities and fans are right to call attention to them.

In the age of social media, users have a habit of saying that people are “cancelled” when they deem their actions to be inexcusable. Like Killer Mike, celebrities ranging from Olympic gymnast Gabby Douglas to singer Erykah Badu have come under fire for making controversial statements in the past year.

Celebrities say inarticulate and insensitive things all the time. This isn’t new. Publicly criticizing someone for saying or doing something offensive isn’t problematic. But the act of “cancelling’ a celebrity has shown society’s fickleness, especially when it comes to public figures.

This is not to say that people don’t have the right to disagree with or even protest celebrities. “Step in the Name of Love” and “Ignition” will never be good enough for me to stream an R. Kelly song or support him in any way. Everyone has a threshold for what they’re willing to tolerate from the people they patronize. Continuous disregard for the safety and wellbeing of young black girls and women just happens to be one of mine.

Perhaps Killer Mike’s support of the Second Amendment is someone else’s.

For me, Killer Mike isn’t “cancelled” because of this interview with NRATV. But, perhaps that’s because I’ve always valued his input but have long disagreed with some of his views.