Movies in Central Park takes viewers on a decade-long adventure 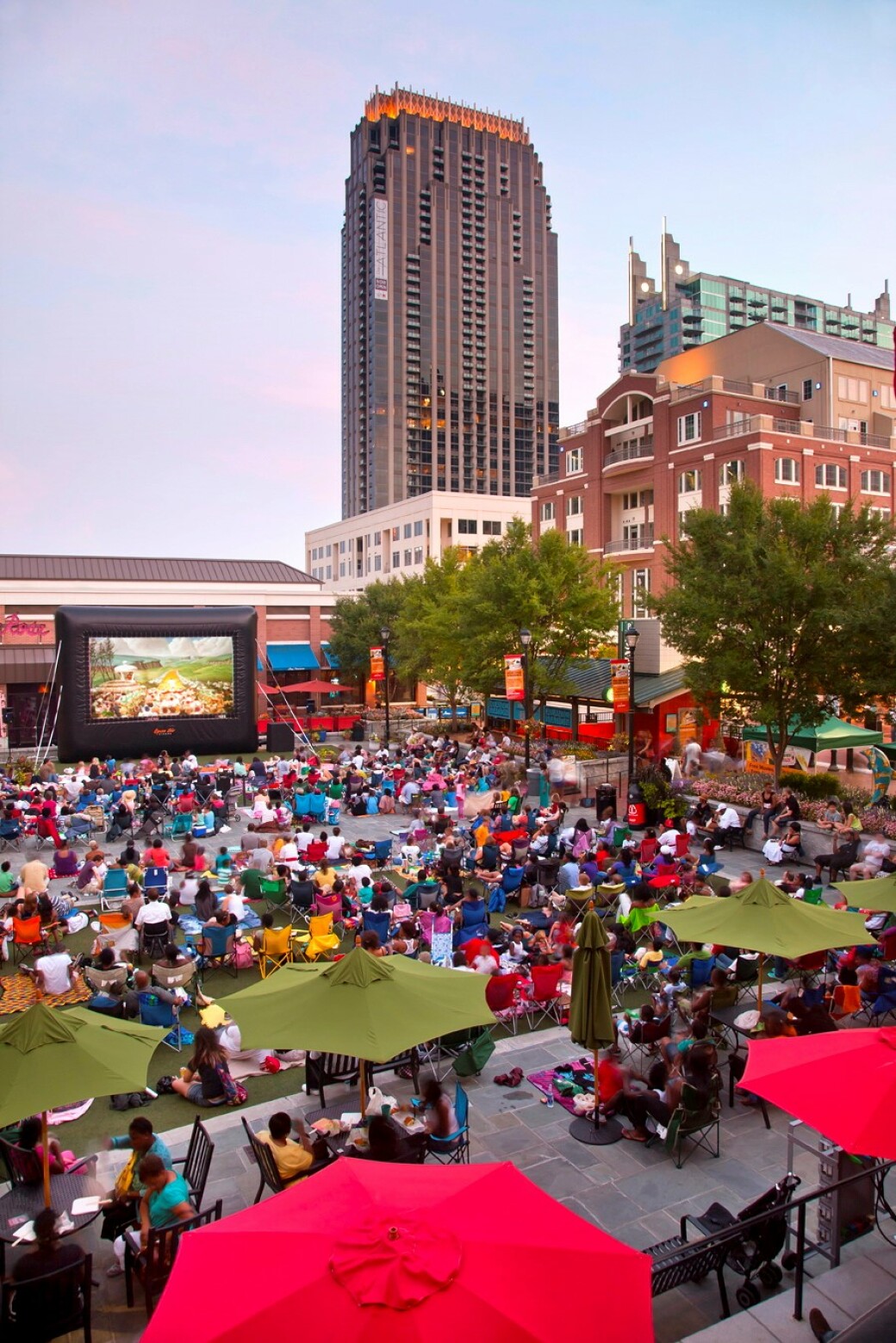 This summer, you can bring it back to the early 2000’s —  yeah, that wasn’t that long ago —  with Atlantic Station’s Movies in Central Park. The line-up will feature the “best of the decade” and a film will air every Thursday from May 17 through July 19 beginning with the year 2000 and ending with 2009. The films will air around dusk — and you must be home before the clock strikes midnight (I jest). Bring blankets and lawn chairs if you’d like, but get there early if you want a good spot. Coolers, food, and drinks are all allowed, but those drinking alcohol must do so within the viewing area inside Central Park. The types of films being played vary greatly, so there’s sure to be (at least) one everyone can enjoy.

May 17 | Meet the Parents | PG-13
The line-up kicks off with this classic comedy starring Ben Stiller away on a weekend with his girlfriend (Teri Polo) to meet her parents (Robert De Niro and Blythe Danner) for the first time. Things don’t go as planned as a series of cringe-worthy shenanigans ensue — with Stiller to blame for most of it.

May 24 | Kate & Leopold | PG-13
The second film in the series brings in a little romance when modern day Kate (Meg Ryan —  in a romantic movie from the early 2000’s — big surprise) meets Leopold (Hugh Jackman), a duke from the 1800’s.  Between what’s expected of them based on their careers and social life, they’re both skeptical of falling in love — so, yeah, big mystery as to what happens next.

May 31 | My Big Fat Greek Wedding | PG
Toula (Nia Vardalos), a long time single 30-year-old, meets Ian (John Corbett) and finally falls in love. Hailing from a large and traditional Greek family, Toula wonders: will they be happy she found love or upset he’s not Greek? This comedy/drama gives viewers a peek into Greek culture while ensuring you laugh along the way.

June 7 | Pirates of the Caribbean: The Curse of the Black Pearl | PG-13

Jack Sparrow (Johnny Depp) makes his pirate debut in this 2003 action/fantasy — now a part of a five movie franchise (c’mon Hollywood). When Elizabeth Warren (Keira Knightley), who holds the key (more literally, the coin) to Sparrow and his crew’s curse, is captured by invading pirates, Sparrow and William Turner (Orlando Bloom), a blacksmith in love with Elizabeth, team up to rescue her.

June 14 | Mean Girls | PG-13
Awkward homeschooler Cady Heron (Lindsay Lohan) moves to suburbia from Africa and begins attending public high school. Unfamiliar with high school life, she compares the cliques within the school to the animal kingdom in Africa. Befriended by a group of girls dubbed “The Plastics,” Cady learns what it means to be a “mean girl,” but learns some lessons about friendship along the way (of course).

For his second movie of the summer line-up, Johnny Depp stars as the the eccentric Willy Wonka in the 2005 remake. Freddie Highmore plays Charlie Bucker, a sweet young boy who finds a rare Golden Ticket, allowing him on an exclusive tour of Willy Wonka’s Chocolate Factory. The film differs from the original with a more extensive look into Wonka’s back-story and what made him into the (not at all weird and totally normal) man he is.

This romantic/musical comedy is a perfect one for the kids. Penguins, love, music and dance —  I mean, c’mon. Follow Mumble, the penguin who can’t hold a note, but can tap dance with the best, as he quests for true love in a world where penguins use song to attract mates. Dancing’s way more fun anyway, Mumble!

Not exactly zombies, but they sure act like it in this thriller starring Will Smith (I miss seeing that guy) as brilliant scientist Robert Neville. As a survivor in a world where a man-made plague (as per usual — humans mucking shit up) has turned a majority of the world’s population into bloodthirsty mutants, Neville searches for a cure using his own immune blood. All the while, the mutants bide their time waiting for him to make a mistake.

Hooray! Will Smith is back for the second week in a row starring as the shabby superhero, Hancock. Not your classic hero, Hancock naps on park benches and leaves havoc in his wake with every rescue or good intention. Unruffled, Hancock lives his life as he pleases, but things change after he saves the life of a PR executive (Jason Bateman) and meets his gorgeous wife (Charlize Theron).

The July 19 film is still undetermined and is up to you, the audience, to vote on. The choices include Sherlock Holmes, Up, Julie & Julia and Star Trek. Cough — Stark Trek — Cough. Cast your vote here. Voting concludes Sun., July 15 and the choice will be announced Mon., July 16 on both social media and Atlantic Station’s website.