The Brasserie and Full Commission 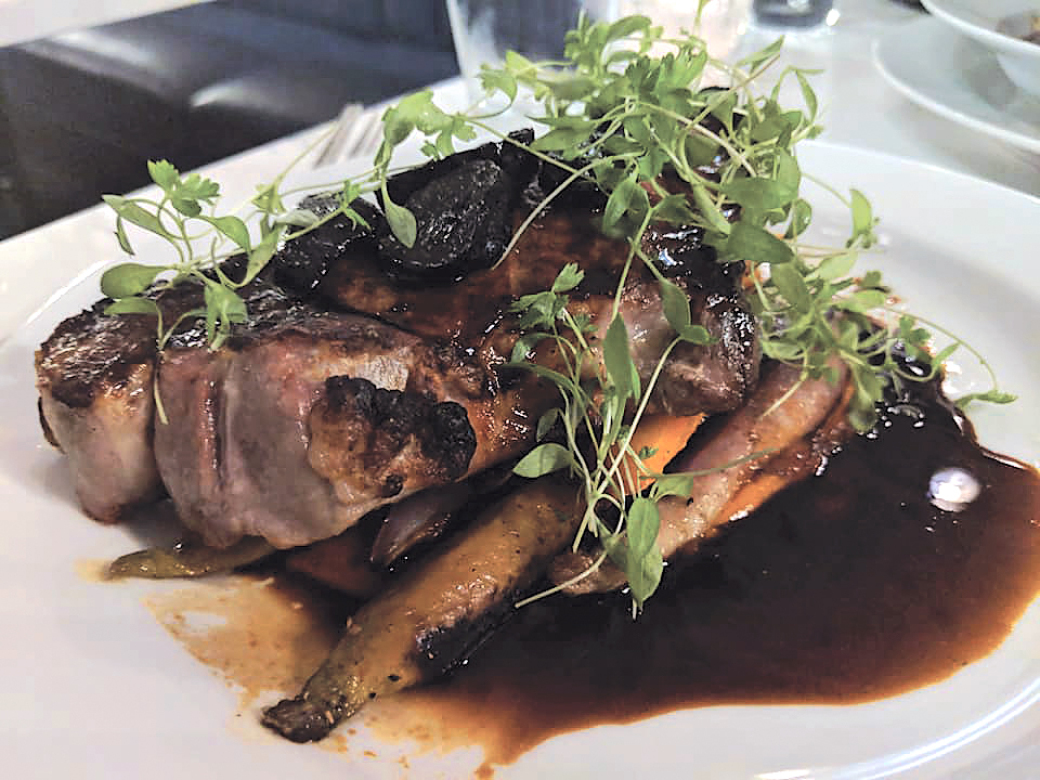 Photo credit: Brian Cohn
NO BONE ABOUT IT: The cider-glazed pork chop at La Brasserie.
By Cliff Bostock Monday February 11, 2019 11:47 am EST

I start with a diatribe. About 20 years ago, I spent two maddening weeks in Turkey. In one leg of that trip, I took a plane in the middle of the night from Istanbul to an interior region. Never mind that I was freaked out when everyone started applauding our safe landing, as if that were unusual. Never mind that I was terrified when we got off the plane and found ourselves surrounded by soldiers with rifles dangling from their shoulders. The most disconcerting thing was to be unexpectedly picked up and silently transported through a few miles of pitch-blackness in which a gigantic modernist hotel suddenly materialized, utterly alone in the landscape. It was rated five-stars and was absolutely hideous — a greenishly glowing, soulless glass mid-rise in the middle of nowhere. Really, we could have been anywhere. We could have been in Atlanta!

It’s exaggerated, of course, but that memory of Turkey came to mind last week when friends and I visited Common Ground, yet another redeveloped, BeltLine-hugging warehouse complex in the Old Fourth Ward. Our mission was to dine at The Brasserie, a French restaurant inside a boutique retail operation there named Bazati, which basically means “hanging out” in Croatian. We drove into the gigantic, but nearly empty parking lot, dotted with traffic cones, where a sign said parking was by valet only. For a few minutes we saw nobody, just some harsh lighting and the looming complex. When we got to the restaurant itself, we found ourselves amid the soaring spaces and windowed walls of modernist minimalism.

I don’t dislike that style per se, but it is so very emblematic of the dystopian architecture for which our city became famous in the mid-‘60s after John Portman built the very modernist Peachtree Center. I call such developments dystopian, whether commercial or residential, because they are instruments of so-called gentrification, which forces the poor and much of the middle class to seek refuge elsewhere, like, maybe, in Jonesboro. The BeltLine has become a wall of sorts, snaking through the city, demarcating class boundaries that provoke the occasional nod of noblesse oblige — “let them live in subsidized housing” — from the city council.

So much for my socialist guilt. How’s the restaurant itself? The chef is Rémi Granger, a real-life French chef who last worked at the much smaller Bread & Butterfly, one of our city’s favorite French-inspired spots. Both restaurants serve breakfast, lunch, and dinner — a definite trend in our city — and there’s no doubt that Granger is up to the task. But much of the food wasn’t what I expected in my one visit for dinner. I feel obligated to note that Christiane Lauterbach, the French critic at Atlanta magazine and Knife & Fork, found its food significantly more likeable than I did. Did we hit The Brasserie on an off-night? I checked in with Yelp and called a few foodie friends. The consensus: needs work.

Here’s a major disappointment: I have been craving coq au vin (and cassoulet!) since the weather made an actual turn toward cold. Two of us ordered it. Each bowl included a leg and thigh in red wine reduced to a darkly glistening sauce full of cremini mushrooms and pearl onions, according to the menu. Well, I encountered the former but nothing of the latter unless they were cooked into complete invisibility. I noticed, however, that my friend’s bowl was actually served with a peak, with more of the ‘shrooms piled atop the chicken. It was also topped with a curlicue of herbs. I got no peak and no herbs. But the biggest problem was that the bottom of my bowl was lined with a super-thick layer of mashed potatoes — so thick that I dubbed it “coq au shepherd’s pie.” I’m completely clueless why. I’m not saying the chicken and its sauce weren’t delicious, but the plating was not good.

Another friend ordered classic moules frites. The white-wine broth was mildly garlicky and buttery. The mussels were fat. But why does the kitchen dump the fries on top of the steaming mussels instead of serving them on the side? Does somebody have an aversion to crispness? A third entrée on the table, a fat, cider-glazed pork chop served over figs and carrots, was the menu’s second-most expensive at $28. The menu said the chop was served “bone-in,” but it was boneless. You might call that a trivial or even positive deviation, but it’s the bones that deepen the flavor of meats.

Generally, small plates and sides were much better. Pork rillettes — pork cooked forever in fat until it’s spreadable but not wholly smooth — were served in a jar with pickled onions, cornichons, and toasted slices of sourdough bread. It was probably my favorite, but I also loved the yolk-topped steak tartare served with a pile of house-made potato chips. Don’t even try to dip; just drop a chubby dollop on each chip. A soup special of vichyssoise with mysterious “bacon caviar” was the table’s best comfort food. I was not impressed by the pissaladière, a pizza of sorts popular in Nice. The dough was dense enough that biting required a seriously rough tug. It was topped with caramelized onions, specks of chopped black olives, and a few white anchovies. I agreed with a friend who said it needed a dose of anchovy paste to ramp up the flavor. The best side dish was crisp green beans with an intense balsamic/black garlic sauce. We tried one of three desserts offered — the “chocolate duo,” consisting of a disappointingly banal profiterole stuffed with crème chiboust (think meringue) and an egg-shaped oval of unimpressive chocolate mousse, all trickled with a chocolate sauce.

As befits a brasserie, there are two bars serving French wines and fancy cocktails, and the menu includes other traditional favorites like quiche, trout meuniere, steak frites, a croque monsieur, and a Nicoise salad.  Despite my whining about modernism, the restaurant, including its lavish patio, really is beautiful. Still, I remain entirely flummoxed by the retail stalls that sell artsy books, artsy flowers, artsy umbrellas, artsy furniture, and, soon, artsy cigars. The shops look like they were created to furnish a cloyingly cute, recently gentrified dollhouse. Don’t let me use the word “pretentious”! Finally, I do commend the restaurant’s service, among the best I’ve encountered in a very long time.

It’s not on the BeltLine, but Full Commission in the Larkin on Memorial in Grant Park is as modernist as The Brasserie. However, the designer, Pattern r+d, has proven that you can be at once modern and seriously cozy. The restaurant has the usual vaulted ceiling and exposed steel beams, but its predominant color is faintly gold, so everything seems to glow like a firelit dining room. Seating 45 inside and as many on its patio, it is by far the most attractive space in the Larkin, which is, of course, a new landmark of gentrification in my own neighborhood.

Also like The Brasserie, Full Commission serves breakfast, lunch, and dinner. I’ve visited once in the morning to try the much vaunted “Southern sandwich.” You get eggs, pimento cheese, and bacon or country ham tastily served on a super-thick English muffin. Since real country ham remains relatively nonexistent outside Waffle House in our city, I was anxious to try the restaurant’s pecan-smoked version. It was novel — sliced so thin that some bites were actually crispy. It reminded me a bit of pastrami, but I don’t question the realness. I want more.

An almost comically delicious dinnertime dish was a not-so-small plate of pork rinds so fresh from the deep-fryer that they popped and crackled when picked up. We ordered a sampler plate of two local cheeses (yay) and a weird, bright-red salami spread (nay), served with heavily buttered toast, cornichons, mustard, a raspberry spread, and bacon-onion jam. Our two entrees could have as well been on The Brasserie’s menu. The best was a bar steak drizzled with blue cheese sauce. The other was competently seared trout in a sauce of butter, (insufficient) lemon, and (seemingly over-fried) capers. My strip steak — the cut can vary from night to night — came with a side of garlicky Swiss chard that was inexplicably greasy. Do not order it.

If I sound harsh, consider that Full Commission, which does serve reliably great coffee drinks and cocktails, has been open since last fall. Granted, it’s been tough going for the restaurant, which opened first as a coffee shop/bar and slowly added food. Then, the opening chef went bye-bye. I saw a bit of kitchen chaos with my own eyes when our server brought our entrees out before we were halfway through our starters. We sent them back and the ambiance grew chilly.

The place is beautiful, so I know it’s going to get better. 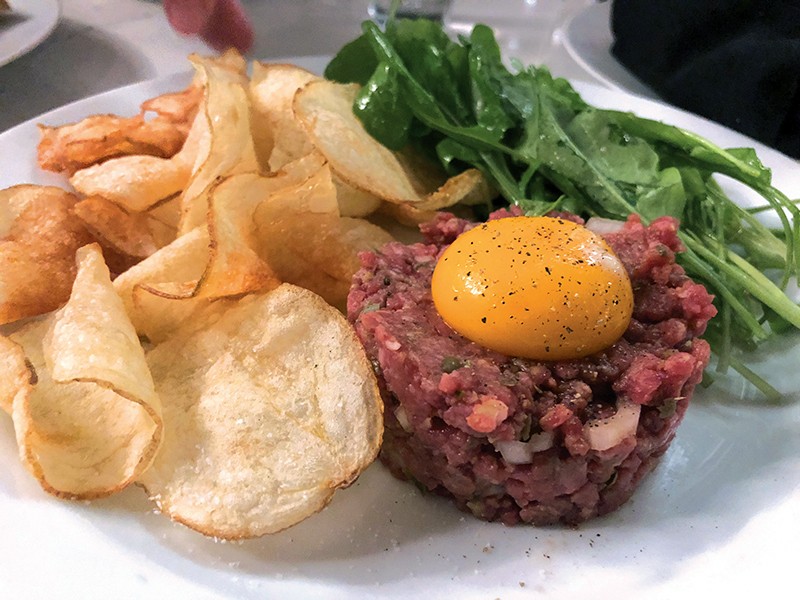 BY THE DOLLOP: Do not attempt to dip La Brasserie&#039;s steak tartare! Photo by Cliff Bostock. 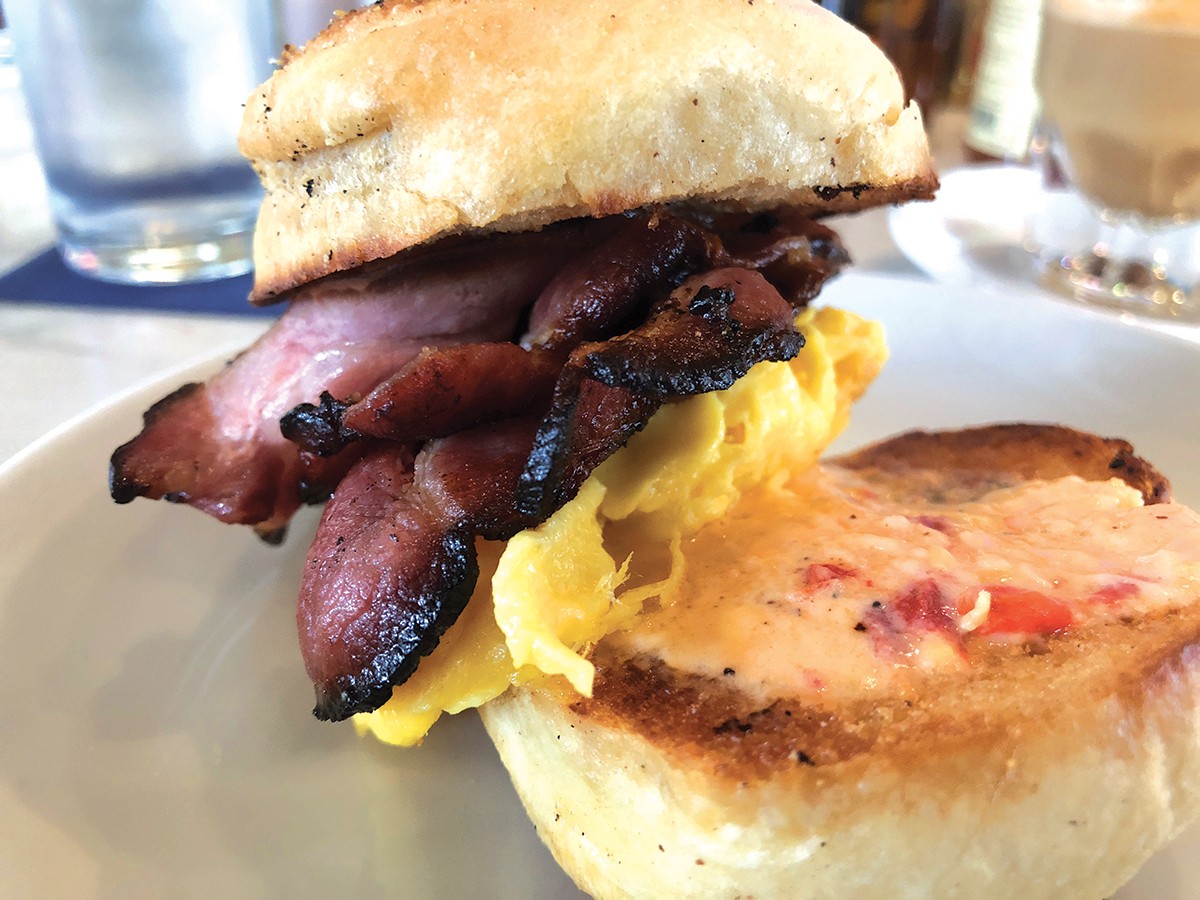 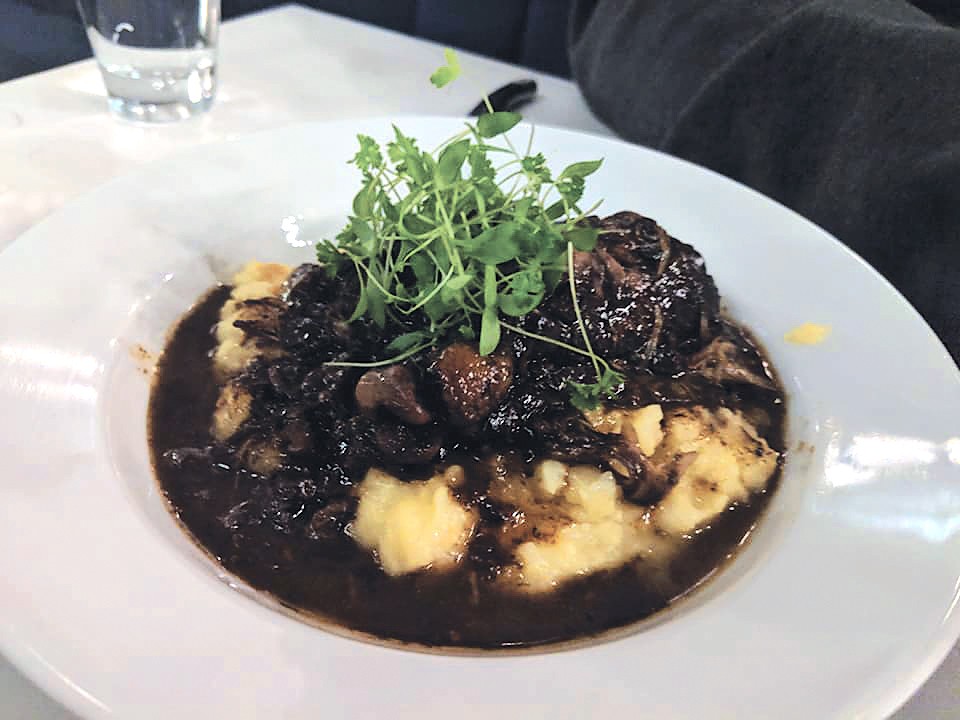 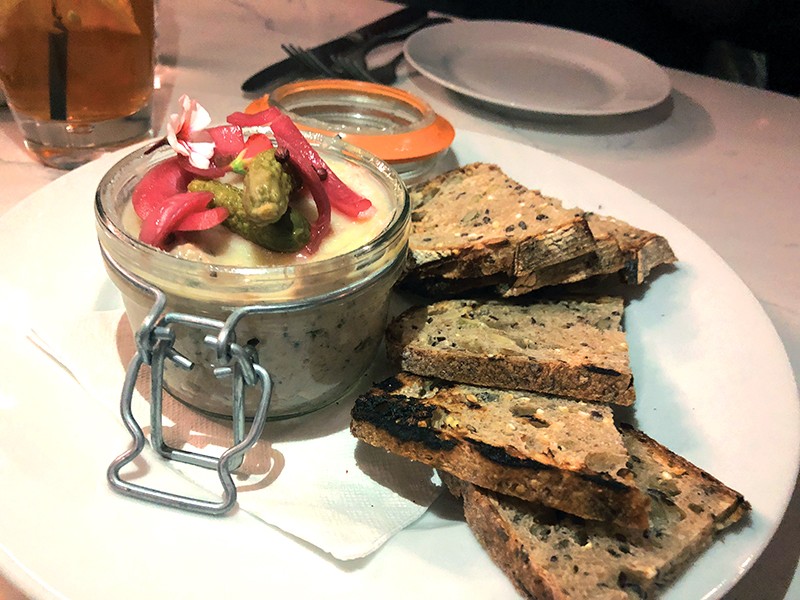 A FAVORITE (OF MANY): La Brasserie does pork rillettes right. Photo by Cliff Bostock. 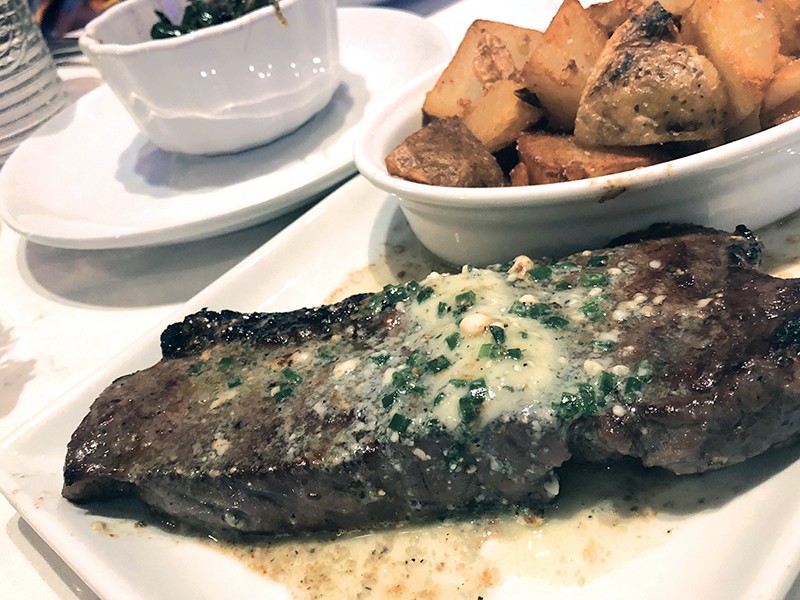 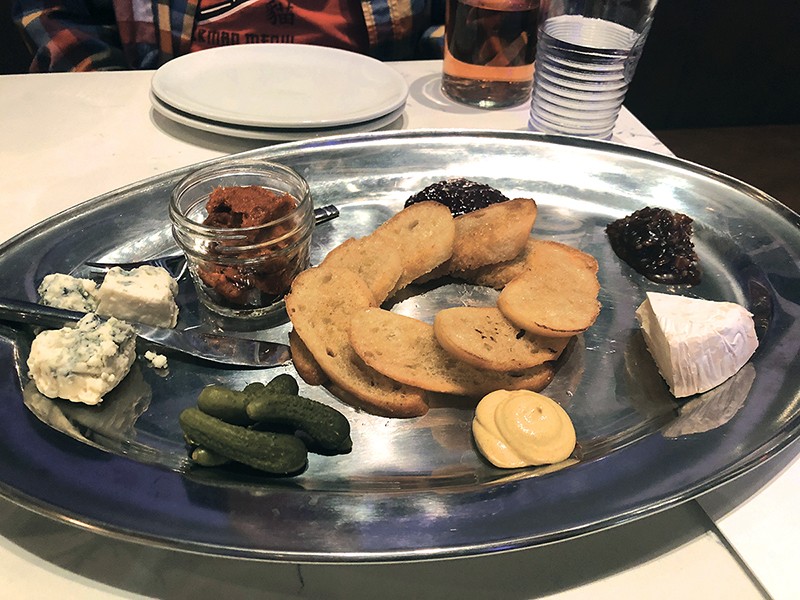 SNAP, CRACKLE AND POP: A not so small plate of pork rinds at Full Commission. Photo by Cliff Bostock. 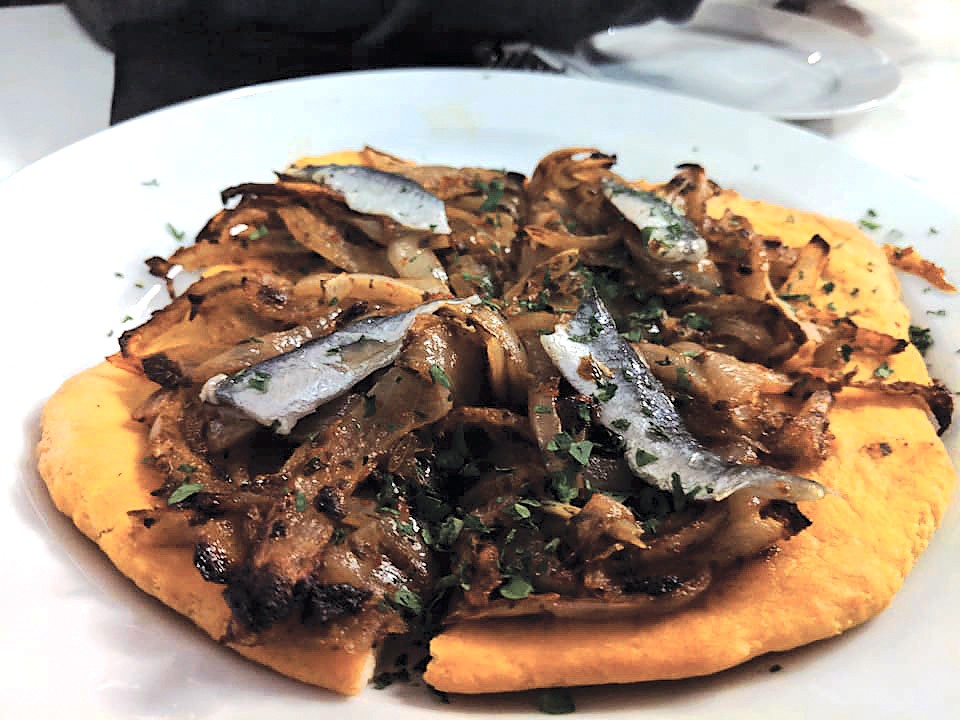 PIZZA OF SORTS: Pissaiadiere, from Nice. Photo by Cliff Bostock. 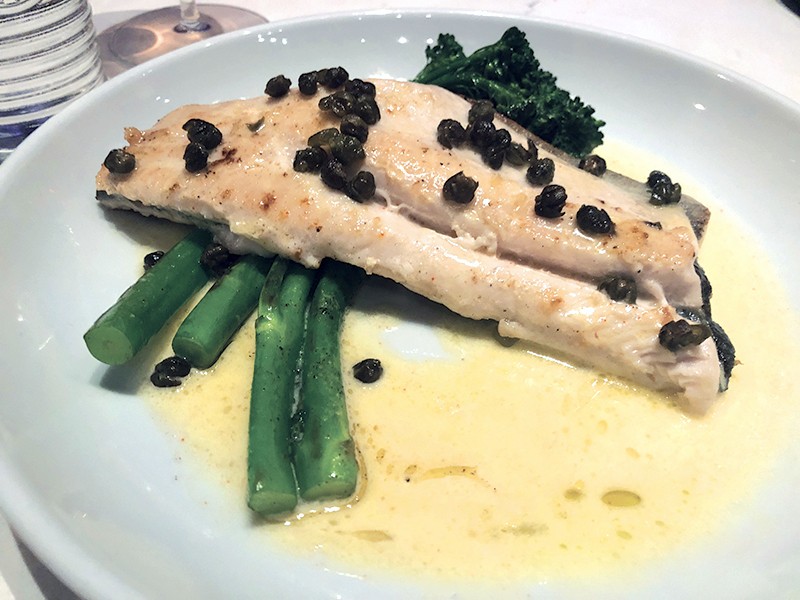 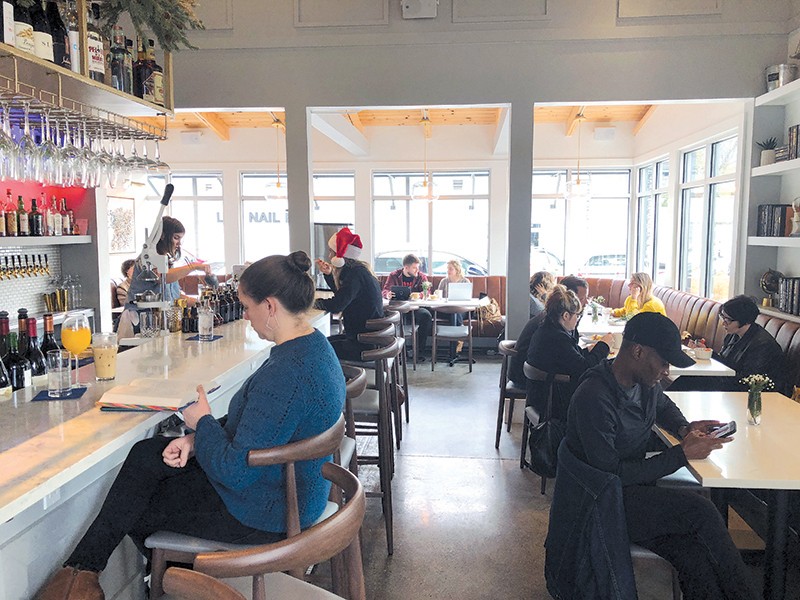