GRAZING: Cheap eats on the run

Don’t bother to wrap it, I’ll eat it here 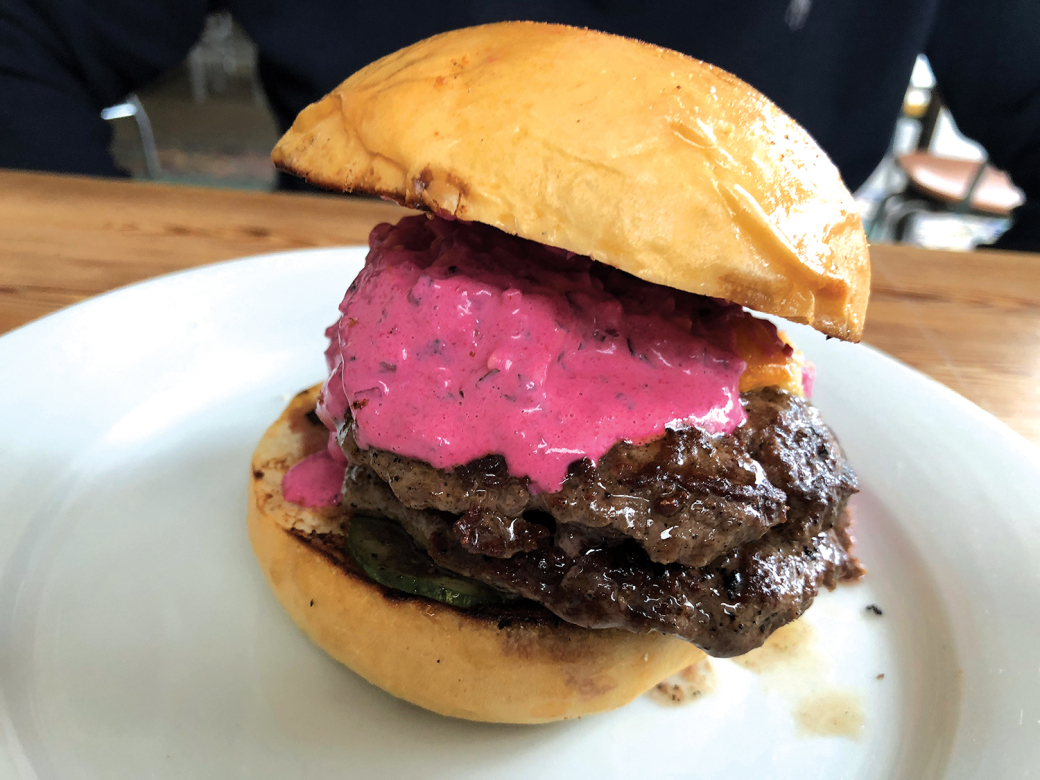 I eat too much.

In recent months, I’ve been lunching and dining with friends four times a week. I can’t cover all those meals in depth in a monthly column, so what follows is blurb-o-mania. Please note that all of these are mainly inexpensive venues, which become harder and harder to find in paradise. 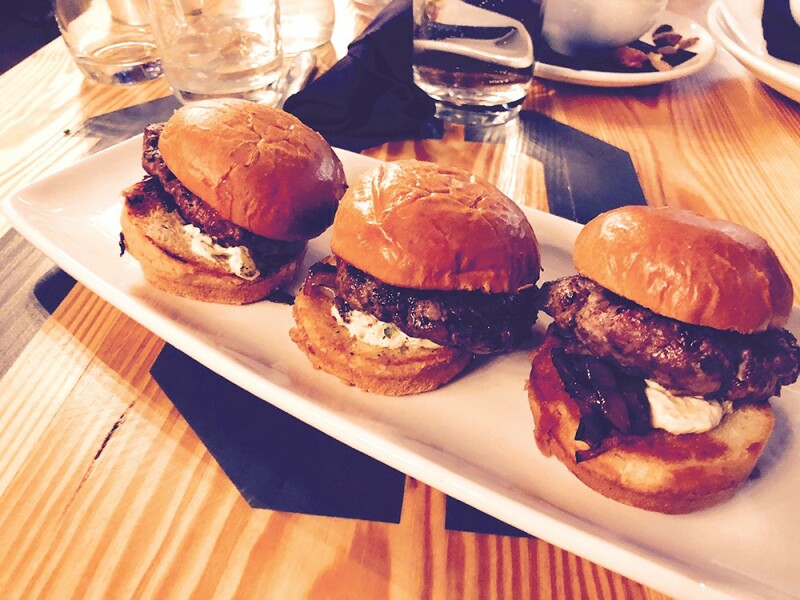 BOXCAR: The lamb sliders, offered as a starter, but enough for an entree. Photo: Cliff Bostock.

Boxcar: If you’re old enough, you remember the West End as a relatively poor, almost exclusively African-American neighborhood whose main claim to fame was (weirdly) the Wren’s Nest, the home of Joel Chandler Harris, author of the Uncle Remus stories. That has changed, and it’s now one of Atlanta’s most diverse areas. (Yeah, it’s on the BeltLine.) Recently, Boxcar opened in the gigantic Lee + White development, a repurposed railroad facility. It’s on the second level, above Hop City Craft Beer and Wine, which owns the restaurant.

The huge space is lots of fun. Despite its enormity, acoustics allow you to talk to your friends and the servers instead of texting them across the table. Try the appropriately messy poutine — fries, wild mushrooms, and cheese curds, all covered with a brown gravy. I also like the lamb sliders served on Hawaiian rolls with tzatziki, peach jam, mint, and grilled red onions. The cheese steak is made with shaved ribeye on grilled ciabatta, with caramelized onions, fontina cheese, kale-almond pesto, and garlic aioli. Not your typical Philly specialty, but well worth ordering. Service is real. 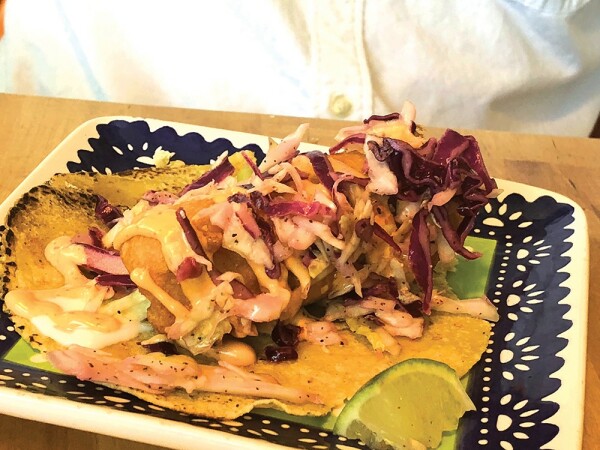 Tuza: This fairly new taqueria in the Westside is something of a mystery. It is certainly fun, with bright tile, a cheerful staff, and slurpable margaritas. But the food is oddly off (even with the much-vaunted house-made corn tortillas). There is no salsa bar and all you are offered is a good house-made red. There’s no green sauce at all, except for an Argentina-style chimichurri which is delicious but too strong for, say, the very dry carnitas I ordered. There is a bottle of house-made hot sauce on every table. It’s fiery, but it ain’t a juicy salsa. Everybody’s favorite taco rightly seems to be the one featuring a gigantic chunk of tempura-fried fish scattered with pickled cole slaw and a chipotle-spiked crema. Friends liked the “classic” hard-shell taco with seasoned ground beef. Do not order a quesadilla. Mine tepidly wrapped tasteless shrimp and unmelted cheese. 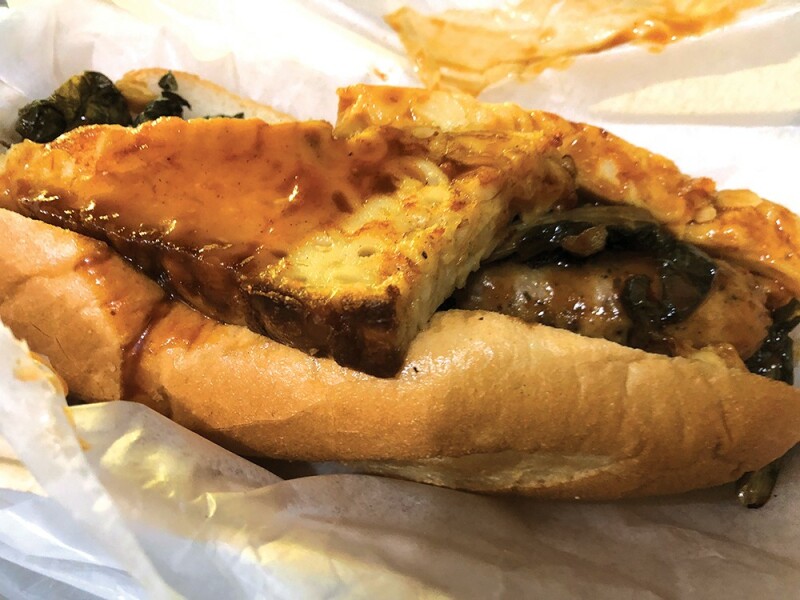 Delia’s Chicken Sausage Stand: It was cheap. That’s the best I can say about my visit to the Westside location of this restaurant that, I’m guessing, caters to students at nearby Georgia Tech, all of whom were apparently on spring break. It was probably crazy to order it, but I went for the “Smack ‘n’ Cheese,” a link topped with collards and two smushed triangles of grilled mac ‘n’ cheese in a squishy hoagie roll. I also got some mushy fries. No way. Never again. My friends were happier with their clucker this and slider that, but we agreed the best part of the meal was eating on the upstairs balcony, watching an endless stream of cop cars dash by, pulling three drivers over in 20 minutes. I guess that’s what happens when nobody’s mugging drunk students. I do commend the staff for their great attitude and sense of humor. “WTF happened to this place?” I asked. I never heard three people (and two customers) shout “I know!” at greater volume.

8arm: I don’t have the several thousand words necessary to tell the tragic-but-triumphant history of this place or explain the complicated menus. Let it be sufficient to say that 8arm leads the growing pack serving brunch 9:30 a.m.-2:30 p.m. Tuesday through Sunday. I love it — especially a pumpkin soup with turmeric cream, fried sage, and radicchio. I admit I remain confused about the ingredients, but I’ve not tasted anything as good in a long time. I’ve also enjoyed the burger with the formerly unfashionable American cheese and a viciously pink sauce of beets and mayo. Definitely try the McMuff. Yeah, it’s a bit trendy with its avocados, scrambled eggs, cilantro mayo, and bacon (if you choose), but it tastes good to be hip for an hour. The fried chicken sandwich, glowing with chili oil and bacon fat, is fine, but really does cross that give-me-a-break line. The biscuits are still primo. The service is … oy. I had to actually go to the window and pick up my own meal during one visit. The server trailed me back to the table, complaining, but, as I told him, I’d waited at least five minutes while the dish sat in front on the counter. 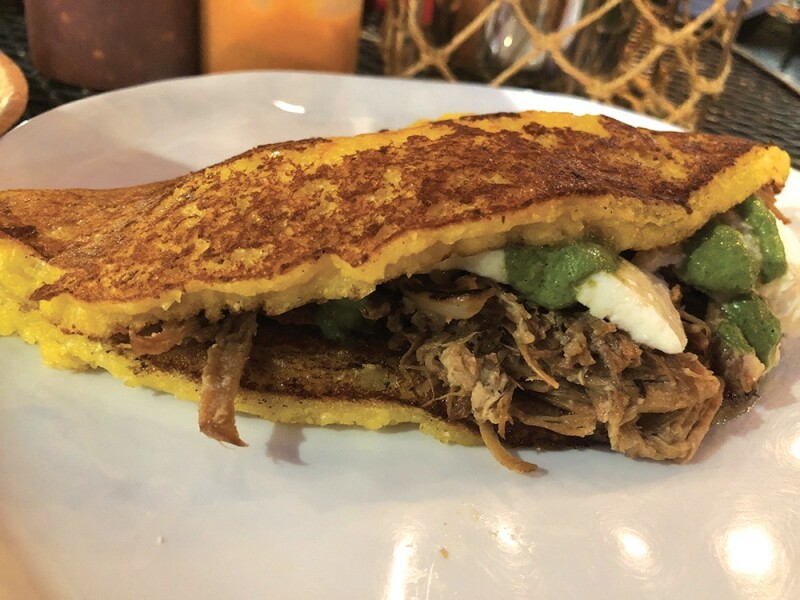 AREPA MIA: A cachapa, a sweet and savory corn pancake, wrapped around the meat of your choice. Photo: Cliff Bostock.

Arepa Mia: I raved about Lis Hernandez’s Arepa Mia at Sweet Auburn Market here a few months ago. I finally made it to the Avondale Estates location a couple of weeks ago. The place has been an overnight hit. You get an expanded menu of the 100-percent gluten-free fare, longer hours, and an easy seat. It’s not that I don’t enjoy sitting at the Sweet Auburn location’s community tables, quizzing Grady employees on their lunch hour about deadly hospital infections. But the new location, open evenings, allows you to have a leisurely dinner with your friends at a table inside or on the roomy front patio that is strung with lights. The go-to is of course the arepa, a crunchy corn patty stuffed with sourced proteins and vegetables. My favorite has always been the pabellon, which is filled with shredded grass-fed beef, black beans, fried sweet plantains, and crumbled white cheese. Now, you can order what is basically a deconstructed arepa — a large plate of the meats with the sweet and savory additions on the side. But honestly, I think these deprive you of the interplay of texture and flavor that makes the arepa so compelling. I do admit that I’ve now forsaken the arepa in favor of the cachapa, a large, sweet corn pancake that is the most addictive thing I’ve eaten in a long time. You can eat it with a fork and knife instead of having to unhinge your jaws like a cobra to eat a chubby, compact arepa. Hernandez has added specials, like grilled salmon, to the menu. We tried a couple of starters including fluffy fried yuca with a green sauce and a plate of sliced avocados and hearts of palm in a corn vinaigrette. They were good but you might also consider splitting an empanada to begin. 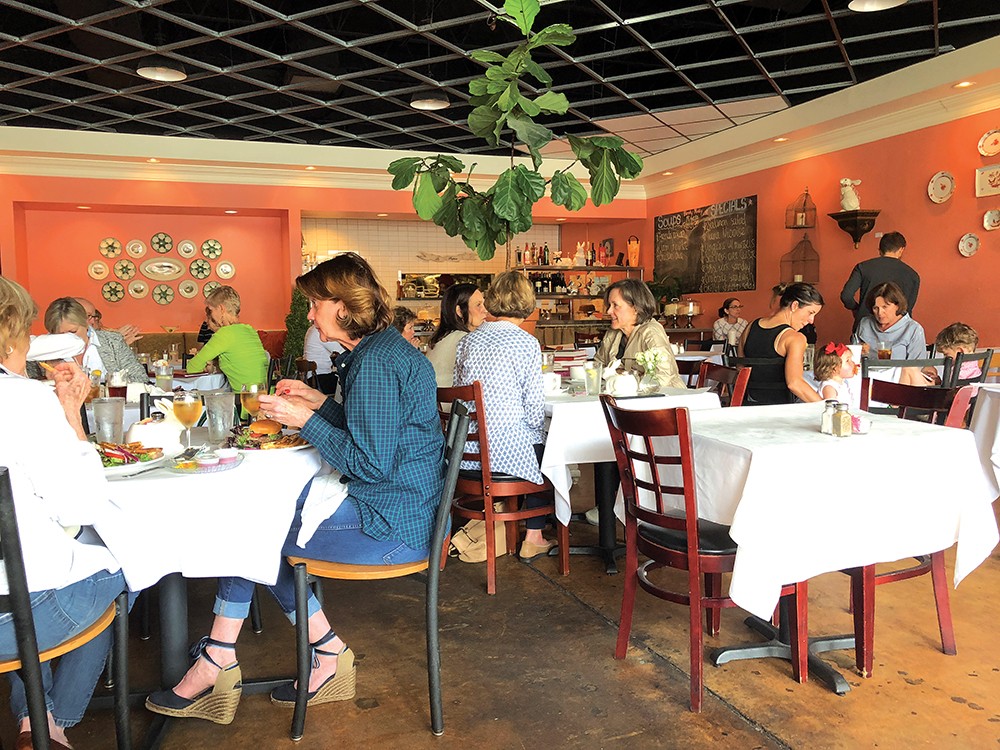 CAFE LAPIN: The ladies who lunch — with me. Photo: Cliff Bostock.


And so forth: Every six months or so, I have to visit Café Lapin in Peachtree Battle Shopping Center and I always seem to end up with the pimento cheese and bacon sandwich and a (sort of) caprese salad. My friend always orders the coconut cake. He’s gluten-free, so he only eats the icing, leaving the rest of the cake on the plate. It’s kind of creepy — the way some monsters eat only the skin of their prey — but it’s a score for me. The really fascinating thing about this place is that it really, truly is home to the “ladies who lunch.” Three of us were the only men in the packed restaurant on a recent Friday …. I’ve been having to ferry Pat the Cat to a vet near Toco Hills Shopping Center every week and the payoff has been visiting Spiller Park, Hugh Acheson’s coffee shop with the motto “Coffee so good we drink it ourselves.” It really is that good and while Pat sits in the car, I throw back a macchiato in the parking lot … because … you know … there’s never a single seat unoccupied by a laptopper. I’m not complaining. Really. Could be me. -CL- 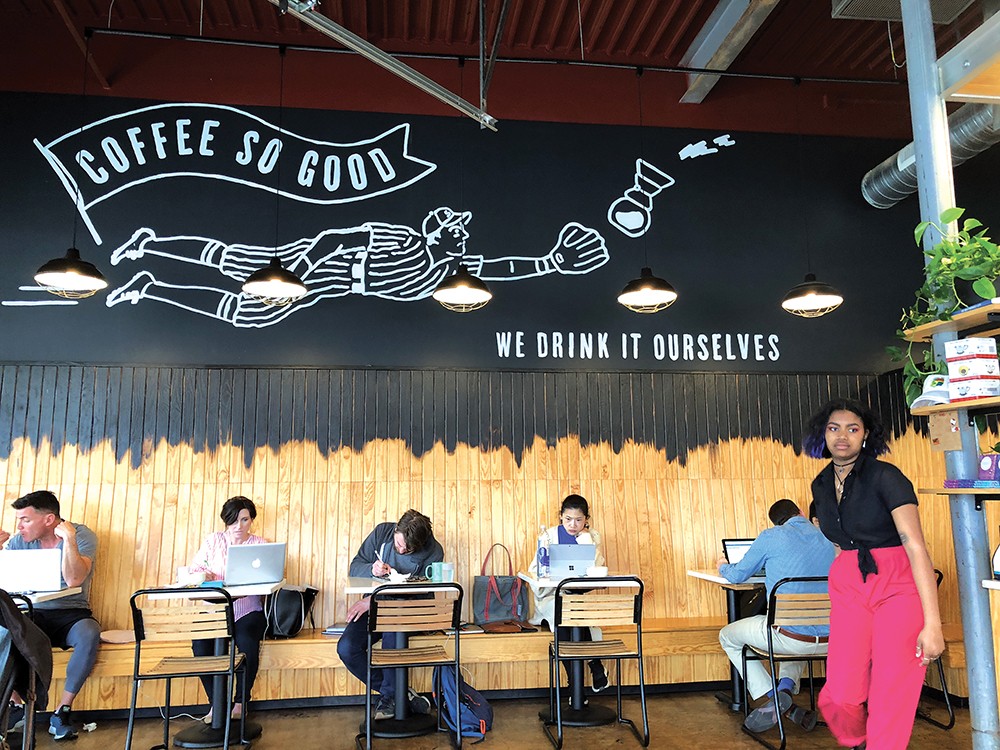 STILLER PARK COFFEE: Every inside table is a work station. Photo: Cliff Bostock.

Not all great chefs feed humans. We’ll get to that, but first I should explain that I’m not a homebody. I’ve always seen my psychology clients in my home office in Grant Park, but I’ve done most of my writing in coffee shops. I even dedicated my 400-page doctoral dissertation to the staff of the Ansley Starbucks. Now, thanks to COVID-19, I have no choice but to sit in place at home. That brings... | more...
Search for more by CLIFF BOSTOCK
Food & Drink Home