SCENES AND MOTIONS: 'Ragtime: The Musical'

Demanding dignity and justice in the Gilded Age 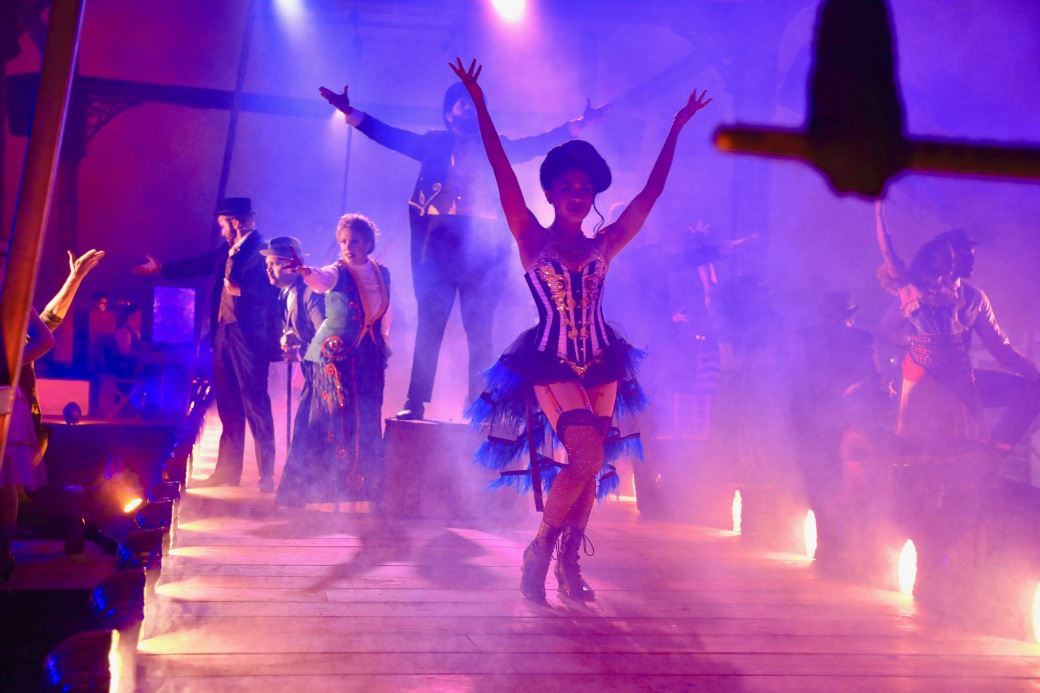 Photo credit: BreeAnne Clowdus
AT SERENEB: The cast of "Ragtime: The Musical."
By EDWARD MCNALLY Thursday May 30, 2019 06:05 pm EDT

"I'll play them the music

My law and my justice

In rhythm and rhyme!

Listen to that ragtime!”


Ragtime: The Musical, at Serenbe Playhouse through June 8, is epic in its scope and urgently topical. The sweeping story confronts racial injustice, sexual mores, immigration, poverty, unionization, women's rights, oligarchy vs. democracy, Arctic exploration, and celebrity murder trials. Visionary artistic director Brian Clowdus has earned a national reputation and serious publicity for his bold, sometimes spectacular outdoor stagings of Broadway musicals (Hair, Carousel, Evita, Miss Saigon, Cabaret, Titanic, etc.) amid the natural landscape of Serenbe, the planned community 30 miles south of downtown ATL. After installing a full-size, working Ferris wheel for Carousel, landing an actual military helicopter every night for Miss Saigon and sinking a four-story model of the Titanic in the second act of each performance of that production last summer, one wonders how he could possibly top himself.


He does it with Ragtime, not by going bigger, but by going smaller, focusing our attention on the actors and performers and their intense, passionate performances. Wisely, Clowdus and scenic designer Ryan Howell chose not to reconstruct turn-of-the-last-century Pennsylvania Station on the same scale as the original lavish Broadway production, or have working 1900s-era automobiles, locomotives, and real fireworks displays. Instead, they and their ingenious team of artist technicians put the audience right next to a fifty-foot wooden vaudeville stage under a giant canvas tent, with a pair of acrobatic swings in the middle and a brassy, super versatile ragtime band at one end.


Voilà! The sprawling red-white-and-blue tableau-vivant pageantry of the 1998 Broadway version is now a cozy, if sometimes crowded, vaudeville review. Step right up! Gaze at the limber young cast in their sexy period costumes (by Clare Parker and Jordan Jeffers)! Don’t miss the “antique” footlights, “vintage” painted posters high overhead, and the sensuous stage fog shifting from red to blue to green to match the mood of a lovely ballad or a passionate scene.


This is Ragtime in the round, with performers moving on and off the stage from all directions and between the few rows of seats that wrap around 90 percent of the runway stage. Real fans of immersive theater can sit at the VIP tables for four that are nestled right up in the action, close enough to feel the sweat flying off the actors on a steamy Georgia night.

Clowdus has put together one of the strongest ensemble casts I’ve ever witnessed in a regional theater production. Many of them connect with each other and with the audience on a more personal level than the Broadway cast I saw almost 20 years ago. The talents of everyone involved, on stage and off, are what ultimately enable Clowdus’ vaudeville approach to convey the heart and soul and brains of this great work of American musical theater.


And there was distant music


The title, Ragtime, refers to the musical predecessor to jazz that was popular in the late 1800s and early 1900s. It grew out of the folk music of the Civil War era and was a key ingredient in the sound of early vaudeville and Tin Pan Alley. Ragtime music was the Elvis Presley of its time — the shock of the new! A daring music that, once heard, could not be unheard. Some say the word is derived from “ragged time,” meaning something that’s ripped apart.

Consider the structure of ragtime music. Steady, marching notes played by the left hand represent the order of the piece, while the right hand uses syncopated rhythms to go against the order. Here, the left hand is a metaphor for John Philip Sousa and the music of 1900-era white society, and the right hand is the mischievous, syncopated rhythms of the emerging urban black culture coming out of New Orleans, Kansas City, Chicago, and Harlem.

Ragtime: The Musical (1997) is based on E. L. Doctorow’s best-selling, Pulitzer Prize-winning novel of the same name published in 1975. (Milos Forman directed an Oscar-nominated film version in 1981.) Doctorow’s sprawling tale, which opens in 1902, is the saga of three sets of characters at the turn of what would come to be known as “The American Century.” As in the novel, historical figures like Harry Houdini, Evelyn Nesbit, Emma Goldman, Booker T. Washington, J.P. Morgan, and Henry Ford all make appearances, sometimes impacting the main characters, other times representing a cultural attitude, an economic shift, or a technological innovation.

Doctorow wove together simultaneous scenarios to connect the lives of three families: upper-class white Protestants living in the New York City suburb of New Rochelle, Lower East Side immigrants from Eastern Europe, and middle-class blacks in Harlem. What if a certain immigrant began a motion picture company? What if that black woman who tried to kill her child was rescued by a wealthy white woman who was just beginning to make her own decisions? What if the black piano player from Harlem changed people’s lives with his music and his demands for justice.


People feathered and tarred, my friend.

Unions broken and why for?

Leave your little backyard my friend.

There are causes to die for!

— “The Night That Goldman Spoke at Union Square”

Initially, the smart, colorful score gives each community its own voice. The wealthy white family sings polite parlor songs. The Latvian immigrants evoke Eastern Europe’s shtetls. The piano player conveys the rambunctious energy of ragtime, the sound toward which all the others begin to bend. Aurally as well as visually, the show becomes a melting pot. These three groups of characters, representing different swaths of the American experience, will collide as cultures cross-pollinate, Gilded Age capitalism ramps up at full steam, and society’s underdogs start to demand their fair share.


I will not move

From where I'm standing

Till what's mine is restored to me

I'm not some fool

I'm not their nigger!

I will have what's fairly owed me!


A flashpoint occurs after Coalhouse Walker, Jr. (Marcus Terrell Smith), driving his own Ford Model T, is insulted by a racist firehouse crew who proceed to vandalize his car. The piano playing entertainer becomes a single-minded justice seeker determined to have his property and his dignity restored, by any means necessary. When we meet Mother’s Younger Brother (Chase Davidson), he is obsessed with vaudeville beauty Evelyn Nesbit (Niki Badua). But hearing anarchist Emma Goldman (Lilliangina Quiñones) at a political rally transforms him into a revolutionary eager to make bombs for Coalhouse and his vigilante crew.

Where are they now,

Those women who stared from the mirror?

We can never go back to before.


Although the tragic storyline of Coalhouse and Sarah (Nicole Vanessa Ortiz) inspires the most passionate scenes and songs, the transformation of the wealthy white Mother (Courtney Chappelle) is the backbone of this story. Her character interacts with and influences each of the three story lines and serves to unify the show. At key points, she recoils at the moralizing coldness of Father (Daniel Burns). Their marriage pits her budding social conscience against his male chauvinism and his white capitalistic need to control his circumstances. Through the course of the show, we watch her discover her humanity and emotions, which lead her to finally find her soulmate in Tateh (Jacob S. Louchheim), the immigrant peddler turned very early silent movie director.

The 1998 Broadway production was nominated for 13 Tony Awards and won four. Best Score went to the songwriting team of Stephen Flaherty (music) and Lynn Ahrens (lyrics). The musical’s book (of lines spoken, not sung) is by Terrence McNally, no relation to myself even though I actually have an older brother named Terrence who has been an actor, a screenwriter, and an LA radio talk show host. One more coincidence: My brother Terrence McNally lives in Long Beach, California, and is friends with the more famous playwright. In 1997, both McNallys attended the LA premiere of Ragtime together.

In an address to members of the League of American Theatres and Producers, playwright Terrence McNally remarked, "I think theatre teaches us who we are, what our society is, where we are going. I don't think theatre can solve the problems of a society, nor should it be expected to. Plays don't do that. People do. But plays can provide a forum for the ideas and feelings that can lead a society to decide to heal and change itself."

Thankfully, this rousing, emotional, and politically powerful Serenbe Playhouse production of Ragtime: The Musical does just that. 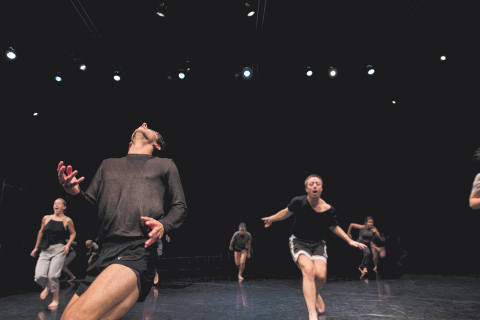 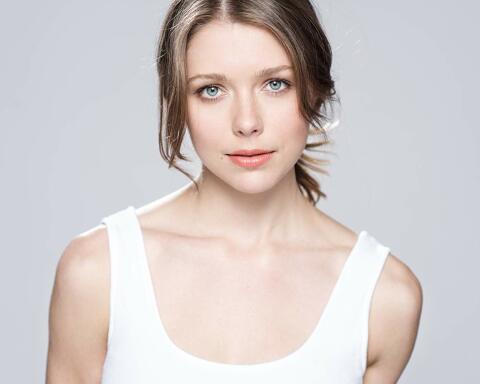 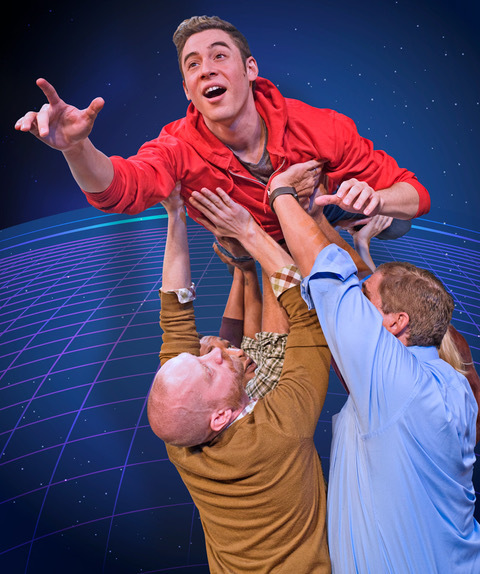 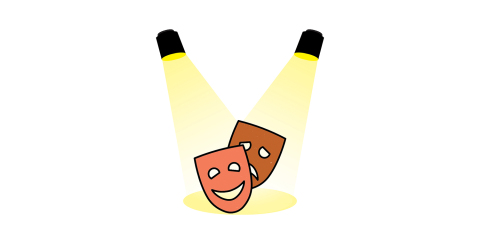 Onstage and off, with actors and puppets, dealing in reality and escape | more...
Search for more by EDWARD MCNALLY