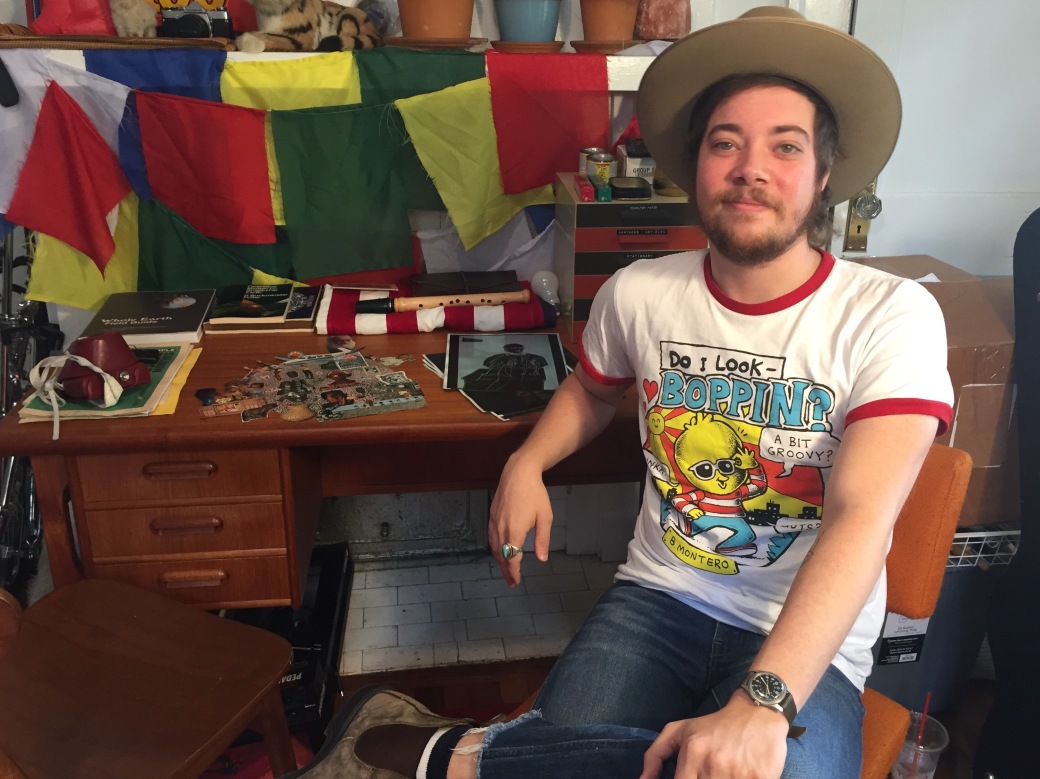 Dressed in frayed jeans, Chelsea boots, and a yellow, blue, and red T-shirt splashed with cartoon letters that say, “Do I Look Boppin’?,” Standard Electric Recording Company’s co-founder Chandler Galloway takes a seat. Swiveling around in his bright orange desk chair, he crosses his legs and cocks his head, which is haloed by a large brown rancher. Galloway is Standard Electric’s creative director, handling graphic design and more, while his business partner, producer and audio engineer Damon Moon, spends his days in the control booth twiddling knobs.

The studio resides in a quaint, aging little house, concealed by shrubbery, behind the Waffle House on Memorial Drive — quintessential Atlanta. Galloway’s office sits in a small room in the back, and the sound of trumpets and other brass instruments waft through the cracks and drafts into the room. Leaning forward, Galloway picks up an odd piece of paper from his desk. “Yes, it’s a collage,” he says.

The objet d'art is an early version of the cover that appears on Lunar Vacation’s Standard Selects release. Suddenly, more collages and magazine clippings appear all over the room, dappling the walls and littering nearly every surface. It makes the office, which is also filled with virtually every instrument imaginable, and knick-knacks of every color, look like a collage of its own.

Galloway is a graphic designer from Cartersville, Georgia, designing band and cover art for some of Atlanta’s most promising indie acts, including Lunar Vacation, Slow Parade, Papa Jack Couch, and Coma Girls. While a lot has changed over the years in terms of where consumers get their music, one thing that hasn’t changed much is album art. From streaming to vinyl, that “little square,” as Galloway calls it, is there, influencing the listener’s experience, and has only become more prominent in recent years as vinyl sales pick up.

“There are all these studies, which I’m very in favor of, that say that having a tactile thing in your hand makes something feel much more real and of value to you, just like the quality of paper can feel special to you and make you not want to throw it away. I pretty much always try to push an album to vinyl,” says Galloway.

Galloway graduated from Kennesaw State University with an interdisciplinary degree that combines film, literature, and psychoanalysis.

“It’s basically marketing,” he says, though the creation of a personal degree, rather than pursuing a marketing degree the school offered, sheds light on how the creative side of this field is important to him, a hobby that started early in life.

“For some reason growing up, I was always like the default ‘Oh he’s gonna do a T-shirt design for us’ guy, ya know?” Galloway says.

Suddenly, the music gets louder, and the instruments colliding in perfect harmony grabs his attention mid-sentence. “Oohh!,” he says, with a light chuckle and a twinkle in his eye, before continuing without missing a beat.

“I pretty much would just be scribbling in my notebook in middle school and it would be like ‘Oh I guess he’s the guy that does that.”

He’s been that guy ever since, from joining a band and doing their artwork, to falling into a design internship at a textile company where he, at first, just lifted boxes.

Now, partnered with Damon Moon at Standard Electric, and poised to start his own agency, Discount Gold, Galloway brings a newfound priority and raw approach to band art and marketing in Atlanta. This new agency will offer general creative marketing with a focus on music and creating a band’s image through album art and merchandise.

“They say don’t judge a book by its cover, but that’s literally how you’re gonna choose, so it’s a lot of responsibility,” he says. “I feel like when a band wants to just gloss over that, they’re really doing a disservice to their whole record.”

For Galloway, cover art is an integral part of the music experience, and not just in the record store.

“Artwork can expand on the story and attitude of a record in subtle ways that don’t need words,” he says. “It’s an opening statement and ultimately has the possibility to summarize the whole listening experience in one little square space.”

His specific process for creating this experience can be summed up in two words: kinetic and collaborative.

To Galloway, cover art — and art in general — is just as physical as it is visual, an idea that stems from his studies in psychoanalysis, and continues through his practice of making collages out of magazine clippings.

“It’s easier for me to lay stuff out and arrange it sometimes … Print feels more classic to me, as you can see by the stacks of National Geographics and stuff,” Galloway says, pointing to a 2-foot-high stack of magazines in the corner.

He also likes the slight imperfections, and subsequent authenticity, this lends as well.

“In the ‘60s and ‘70s there were all these alternative magazines in Atlanta, like The Great Speckled Bird, and it felt so authentic the way they would do design, like they were trying their best but it just totally was not perfect,” he says. “That’s the style I appreciate.”

Conceptually, Galloway’s approach includes thorough and consistent collaboration. There is no linear way about the process — he insists on a circular pattern of brainstorming between the music, his art, and the band’s ideas.

“It’s always super collaborative,” Galloway says. “We’re supposed to be on the same page. We’re working together on it.”

One example of this, and his favorite piece of album art he’s created so far, is the art for Slow Parade’s upcoming record: Hi-Fi LowLife. What looks like a rainbow kaleidoscope of filtered images spiraling into the stratosphere, started as a 7-foot collage on the studio floor, and was born from the way the recording process unfolded over a year.

“I played on the record too, so I’d come and play a little piano here and add an organ part there — at some point it occurred that, ‘This sounds like a collage,’ so why don’t we just make the biggest, most layered collage we could do to tie in the theme of the record,” Galloway says.

Another example is the art for Pony League’s most recent album: A Picture of Your Family.

Galloway met with the group’s frontman Gus Fernandez, who provided him with some unorthodox are direction for what they wanted to accomplish with the album: “He was like, ‘We want our record cover to look like ASMR sounds like,’” Galloway says.

The task was accomplished with a grainy film photo of a floral, ruffled, sheer curtain next to a kitchen table.

“I took all these photos,” Galloway laughs, “and what we ended up using was the test shot I took of a window.”

His words, once again, speaking to the thorough, collaborative, and off-the-cuff approach he takes with each work.

Looking off to the side, Galloway contemplates the future. While he believes strongly in the importance of band art and branding, he recognizes the difficulties bands face in fleshing out their identity. Being a former band member himself (Sydney Eloise and the Palms), high prices and loss of creative control are risks he knows all too well. He hopes his future agency, Discount Gold, will be an affordable, comfortable haven for creative expression, away from those risks, because to Galloway, the ultimate album art is merely an extension of the band’s music. -CL-