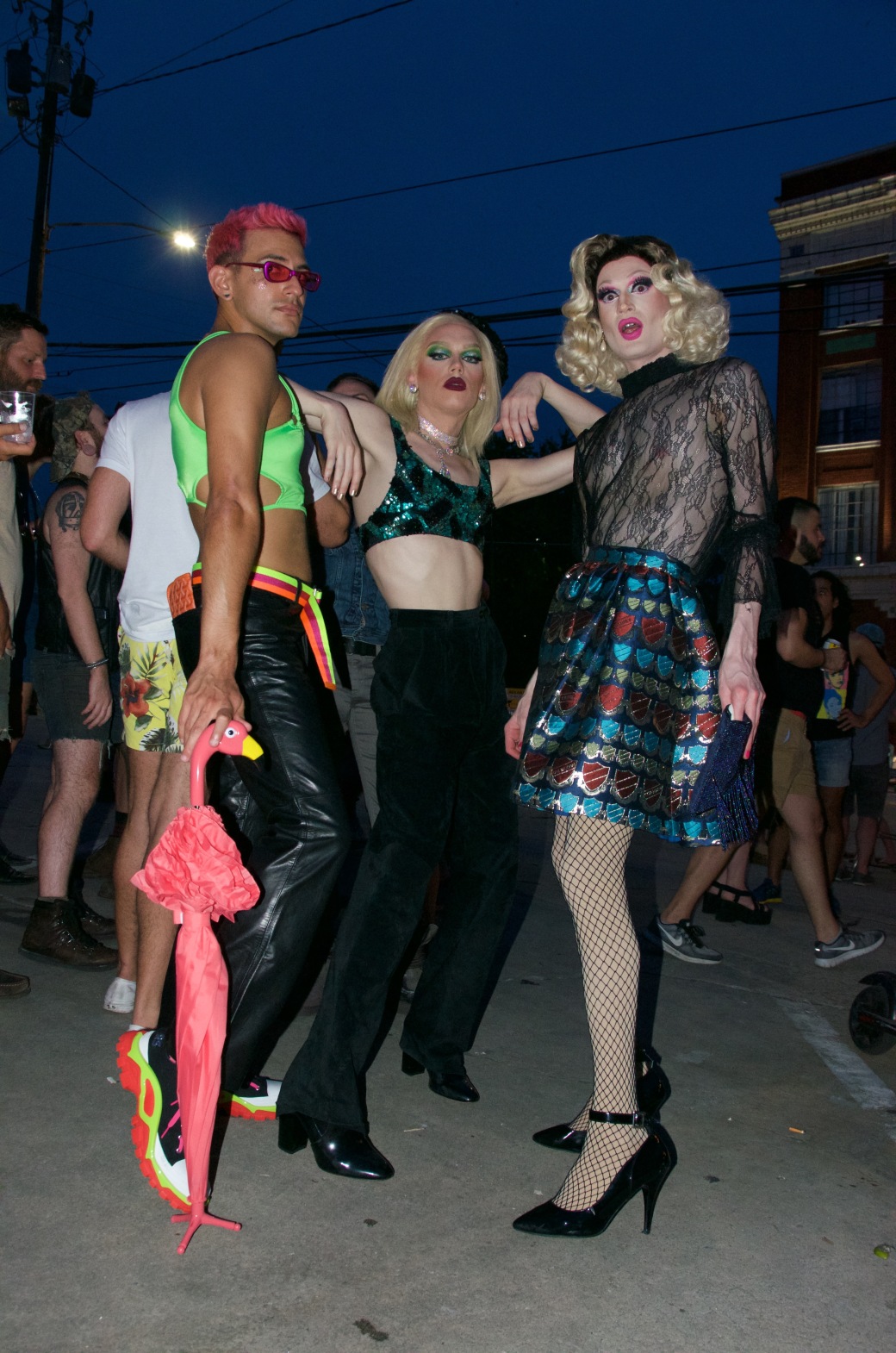 The Move is a column intended to help you beat the fight against basic, one move at a time. Look here for all the best underground, and some above ground, events in ATL. Bc you CAN have a balanced diet of disco and yoga. Warning of side effects: Overdose of culture and queerdom. Bloated bank account from lack of overpriced ticket purchases. Confusion meeting clarity via mind, body and soul. Consume at your own risk.

This month, on The Move, hip-hop for the hearing impaired, a yoga marathon, and more. Can you guess which Australian pop star hits Atlanta in August and is only performing in small venues?? How about Ouiser on the big screen? Read on for the tea, my Fluffy Bithkitz.

Psst… Xtra! Xtra! Weed all about it! Shameless plug for CL’s latest podcast series, “Friends in High Places.” Listen along as I interview the likes of those mapping out the cannabis industry for Georgians, bc it’s not coming, it’s here. Kwanza Hall, The Georgia Hemp Company, Aviva and the Flying Penguins, and Sophia Sabsowitz with Pulp Books ATL, are all available for your listening pleasures on iTunes, Spotify, SoundCloud, and of course, creativeloafing.com/podcasts.

AMEN: Night of 1000 Brigitte Bidets! Best Drag Queen, Best Event Host ... just a few titles our beloved drag queen Brigitte Bidet has earned from CL Best of Atlanta. STUNNING!! But also, this queen is a professionally trained dancer, with a comedic flare that will have you crying tears of laughter after she’s read you from top to bottom. Comb out your best blonde wig and squeeze back into that cheer squad ’fit and pay respects to the legend herself at Sister Louisa’s Church of the Living Room & Ping Pong Emporium. Night of 1000 Brigitte Bidets is part of the monthly drag show, AMEN, a TAYLOR ALXNDR production.

ContrastATL: Dado (Free All Night) ContrastATL is the spot for FREE SOUNDS. This edition brings West Coast dubstep producer, Dado, for an intimate, speshy night of deep curated vibes at the Edgewood Speakeasy. Happens on 8/08, but not in connection with 808Fest. Bass, however, will still be present.

Dirty South Yoga Fest For the sixth consecutive year, Dirty South Yoga Fest brings together all of Atlanta & beyond’s best yogis under one roof. Throughout the weekend, yogis can choose from more than 10 courses of movement, meditation, and camaraderie. Classes vary and include options like RAVI Flow 101 using weighted blankets for additional calming; "Ride the Wave of Breath," a Somatic Exploration; and introductions into acro yoga.

CL’s Best of Atlanta “Best Yogi” 2018, Ziggy Moon will lead the meditation at the Friday-night Kick Off party, which also features vocalist Ruby Velle and yogini performer Charisse. “YES we will meditate, vibrate, and levitate. Buy your tickets for the Fridayyy Kick Off at dirtysouthyogafest.com,” — Ziggy Moon. The Loudermilk Center on Courtland Street is the location for this year’s festivities.

Subtle Presents a Block Party & Warehouse Experience 2 p.m.-4 a.m. House and techno party hosts Subtle popped on the scene earlier in 2019, partnering with the Westside Cultural Arts Center and handpicking a house music selection that proves in demand in Atlanta. A short five months later and they’re bringing us a fest. “Our main focus is techhouse, techno, and house music, but we have included a couple of bass acts on the outdoor stage.” — Brendon, director of operations, Subtle Events.

Need some encouragement to get started early? Shlump tells The Move it is providing an open bar, as in FREE, from 2-3 p.m. Two out of the three stages are AIR CONDITIONED. This is huge. The outdoor stage will collaborate with 808 Fest, a multiday, multivenue celebration of bass happening around Atlanta the same weekend, with Dead Romeo from 4-5 p.m. Times staggered so no headliners are on at the same time. Kill Frenzy and VNSSA of Dirtybird fam are set to perform for the first time in Atlanta. Hoops and poi allowed, but leave that fire at home as they’ve hired professional pyros. Also, I’ll appreciate what else Subtle tells you to leave behind: “No bad attitudes or vibes.”

Brendan Maclean with special guest Chelsea Shag When the Goddess of Nonsense ATL, DJ Kimber, calls to say she’s bringing a queer pop icon stateside, you clear the schedule hunny! “This is a big ol’ deal because his album debuted at #2 on the Australian iTunes charts in March, and he’s been called things like ‘a king of pop in the making’ (by the Guardian UK). He’s a queer icon in Australia but just hasn’t broken over here in a big way yet, so we’re fortunate to have him at such a small venue.”

Maclean’s controversial music video, “House of Air,” was described by the New Yorker as “Should never be viewed in any public setting,” and was eventually removed from Youtube. Why? In the video, homosexual encounters are depicted, casually, but I’m going to guess the interracial analingus is what sent evangelists into a tailspin. Personally, I find the video educational, interesting, and positive in nature. Nothin’ like young gays being gay! Emojis: butterfly, spinny heart, spinny heart, rainbow, boys kissing!!

PS: Preview Maclean live on CL’s Live from the Archives on Wednesday, August 21 on Facebook (@clatl) and Instagram (@creativeloafingatlanta) Live. Simply go to our profiles to view. Show starts around noonish.

Can You Hear Me Now? DEAFinitely Dope is the artist name for Matt Maxey, a deaf performer and “the man bringing music to the deaf community,” landing at The Bakery Atlanta in August. From a young age, Maxey has only heard 25 percent of what’s going on. Add trusted hearing aids, and that volume cranks up to 70 percent. Focusing more on speech therapy, he struggled with sign language, until he challenged himself to sign his favorite rap songs. It worked.

In classic Bakery fashion, this event comes with more than one attraction. On the menu for the same evening are two short film screenings about deaf artists and an interactive sound exhibit. “We will turn the stall hallways into booths in which you can experience sound in different ways (touch, vibrations, visual).” — Amanda Norris, The Bakery Atlanta

29Rooms: Expand Your Reality Traveling immersive installations making up “29Rooms” will head south August 29 and stay through September 8 at The Works, an 80-acre adaptive mixed-use development in the heart of Atlanta’s Upper Westside.

Super blog Refinery29 selected two Atlanta artists to collaborate on this multicity event. Artist Sarah Emerson, chosen to create the welcoming mural, would not giveaway her master plan, but did hint at fluorescents. Let’s glow! Once inside, you’ll find immersive artwork by artists from around the country, including local GSU grad, NNEKKA. Check out @CreativeLoafingAtlanta on Instagram for video interviews with both Emerson and NNEKKA.

“Through multi-sensory installations, performances, and workshops, we present you with a new way to connect with creativity, culture, and community.” — 29rooms.com. Besides the art, the beauty of these temporary attractions is they literally don’t get old. Similar to Infinity Mirrors, Candytopia, and Slime City. What a time to be alive!

Chaka Khan Hacienda. Last month’s Talk of the Town highlighted a very regular Move, Chaka Khan Hacienda. This is one decorated day party owning the current title of “Best Day Party 2018” and “Best Recurring Party 2018,” by CL’s Best of Atlanta critics. This party is the reggae, house, and disco fusion sailing over the smell of Japanese street noodles overlooking the heart of Ponce, produced by bombshell Ree de la Vega.

The SCENE: Colorful. Gays, grays, and baes who slay. But seriously, it’s all ages and family-friendly. Most recently, I paid $5 for temporarily glittered teeth, and an extra $5 for more glitter to the face. Cupping’s a thang too. You know, that ancient form of suctioning glass cups to muscles. Great for pain relief, but leaves hella marks. You know it’s a safe space when everyone is happy, dancing, buying vintage, and paying for giant hickies. Plan on getting sweaty, Betty!

WUSSY Mag brings Steel Magnolias to the Plaza Theatre “DRINK YOUR JUICE, SHELBY!” This 1989 classic based on a true story was written in just 10 days. “It just poured out into my typewriter in a 24/7 tsunami of Southernness,” writer Robert Harling has been quoted as saying of the play, which was inspired by the passing of his sister, who would become “Shelby” in the iconic film, set and filmed in Natchitoches, Louisiana.

If you’ve never seen Steel Magnolias on the big screen, now is your time, darlin’! And aw hell y’all, if it ain’t a Wussy party. Drag Queens Brigitte Bidet and Molly Rimswell are hosting a costume contest, so dust off those floral-print couch cushions and start crafting that look. “We encourage attendees to get rowdy, quote, and interact with the film.” — Wussy Mag. If you don’t like folks talking during films, stick to Netflix.