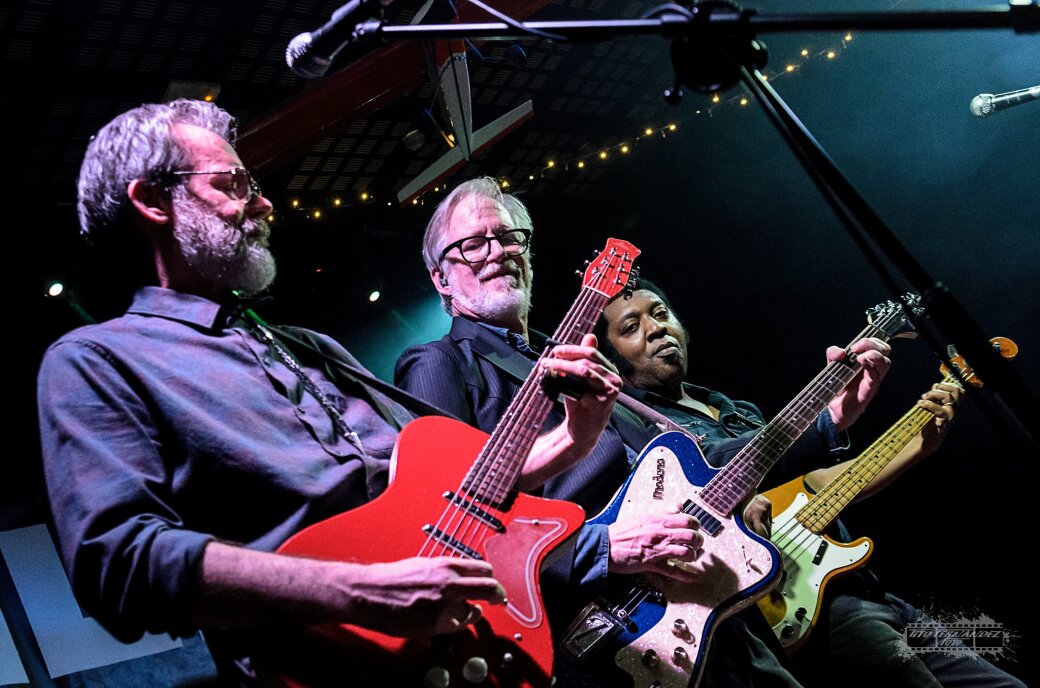 It’s not a stretch to say that almost every Atlanta area blues or roots music fan has seen Delta Moon at least a few times.

After all, the band — fronted by founding members and guitarists Mark Johnson and Tom Gray — has steadily been releasing albums and playing live since its 2002 debut. Since then, they nabbed the prestigious Best Band award at 2003’s International Blues Challenge (competing with musicians from the US and abroad), played almost every blues club, bookstore, coffee house, and neighborhood festival in Atlanta, opened for a clutch of top acts in their genre, and garnered nearly a dozen awards from critics and readers in Creative Loafing’s annual Best Of awards (including Best Local Blues Act and Best Overall Local Music Act, many times over).

Last year, Delta Moon released Babylon Is Falling, the band’s 10th studio album, prompting them to win CL’s readers’ choice for Best Blues Act yet again. Perhaps most impressive is that for all the success they’ve garnered at home, the group tours Europe and the U.K. multiple times yearly, making them, along with Tinsley Ellis, one of the few local blues outfits to consistently take their music to foreign shores. By any standard, Delta Moon’s 17-plus-year run has been remarkably successful. And with three studio releases in the past three years, the group is arguably as vital, busy, and productive as ever.

Not surprisingly, there have been substantial modifications along the way. “The biggest change was when we quit having a female vocalist (in 06/07), and I took over the vocals,” Gray says in a raspy voice similar to his singing style. Johnson adds that plugging in and going electric (before the release of their debut) was also a major turning point. And certainly international exposure, helped by 2003’s IBC award, put Delta Moon on a far wider and higher profile map.

Gray’s transformation from keyboard-playing frontman of early ’80s new wavers The Brains to Mississippi-styled funky bluesman has long ago stopped raising eyebrows. Delta Moon’s swamped-up combination of originals along with covers that range from Tom Petty to longtime favorite RL Burnside (both feature on Babylon Is Falling), ensures their fiery and often interwoven twin guitar (generally Johnson on slide, Gray on lap steel) approach stays fresh.  Delta Moon’s music certainly rocks, yet they avoid the clichéd Stevie Ray Vaughan-isms many of their peers prefer, keeping one foot in the past while adding a tough contemporary spin that’s never slick or commercial.

While the front three musicians (Franher Joseph has been Moon’s bassist since 2007) have stayed constant, the band has struggled to keep a steady drummer. “We demand a high-quality drummer, and they are in high demand,” explains Johnson. DM’s heavy European touring requires them to swap two drummers who live abroad, saving the cost of a plane ticket. They also have two more for U.S. dates. “We’ve got a nice rotation of great drummers, and that just works better for us,” he says. Interestingly, one of their European drummers used to play in Atlanta’s King Johnson, a top ’90s local roots act fronted by Oliver Wood.

As the workload has increased, Johnson describes how he optimizes his time. “I play the guitar every day, but recently I’m picking it up with Delta Moon in mind; trying to mine some licks or write something or preparing for a show. I focus a lot harder on what needs to happen.” Gray, who shares his musical duties with the administrative jobs every effective group deals with, struggles with those tasks. “I spend a lot of not musical time being the accountant and social media guy. Also I do some solo singer/songwriter stuff.”

While Delta Moon’s rise has been steady yet gradual, lately the band has been as busy as ever in their increasingly hectic career. They have knocked out three short European tours each of the past three years (multiple overseas agents and connections help with that) and already have booked another trio of trips for 2020. “We’re out of the country three or four months of the year working, and you really can’t do much else but be in the band,” Gray says.

“We’re building (our following) too. Every year the crowds get stronger, it’s a steady progression upward,” Johnson injects. “You can also work more there. We have worked seven nights a week in Europe, doing stretches of 12-14 dates in a row.”

When asked what they wish they knew in 2002 that they have learned in the ensuing years, Johnson goes with “physical maintenance on the road. Learning how to stay healthy and have optimal energy.” Tom agrees and says that “as you get older, it takes more work, noting that “our diets have changed too.”

Delta Moon’s recent spate of recording activity — releasing a studio album a year  — shows the band’s creativity continuing to expand. Johnson says, “We have a strong core between Tom, Fran, and me. We’ve figured out how to bang things into shape really quickly.” Gray adds, “We’ve got the album process down a little better, although we learn something every time. The three of us have been through an awful lot together, there are no secrets in the band, and we know how to work with each other at this point.”

Editor’s Note: This interview with Tom Gray and Mark Johnson occurred less than 24 hours before Gray announced that the cancer he had already beaten twice had returned. This required the cancellation of all upcoming Delta Moon dates, local and European, for the foreseeable future.

Give thanks for local November shows with these Blues and Beyond highlights:

Jamie McLean Band, Smith’s Olde Bar. The New Orleans-based blues guitarist played in the Dirty Dozen Brass Band but has been cranking out strong, blues-rocking, folk, country, and R&B inflected solo albums since 2011. Expect to hear material from 2018’s soulful One and Only.

Allison Moorer, Eddie’s Attic (7 p.m. show). Moorer has not only released new music but also her first book, both titled Blood. She discusses them with The Bitter Southerner’s Kyle Tibbs Jones and will play some selections solo from the disc in this sure-to-be affecting and intimate event.

John Nemeth & the Blue Dreamers, Blind Willie’s. Memphis Grease is the name of one of singer/songwriter/harpist Nemeth’s albums, and it also describes his sound.  He has been a Willie’s regular since his 2007 debut and never fails to draw a crowd hungry for serious soul/blues from an established genre journeyman.

Buddy Holly and Roy Orbison, Symphony Hall. Night of the living dead? Subtitled the Rock ‘n’ Roll Dream Tour because well, neither will be there in person, this double bill presents the rock and roll icons in full 3D, holographic glory. The music is live, as are the backing vocals, with Orbison and Holly’s original voices on tape. What seems to be odd, if not outright schlocky, is actually pretty cool and definitely worth a look if you are a fan of either.

The Black Keys, Modest Mouse, Shannon & the Clams, State Farm Arena. The Black Keys have been through plenty of changes since the duo’s 2002 debut. But at their core, they remain a rugged psychedelic blues band, albeit one that has broken through to a massive audience. Their new album, Let’s Rock, gets back to basics with shorter if somewhat slicker songs and nods to the scuzzy blues that put them on the map.

Rising Appalachia, Variety Playhouse. Atlanta-based sisters/songwriters/singers and multi-instrumentalists Leah Song and Chloe Smith have taken their folk, world, soul, and socially relevant music around the world. They return home to celebrate the recent release of Leylines, another beautifully crafted set of the indescribably diverse and eclectic acoustic sounds they effortlessly create.

The Doobie Brothers, Cobb Energy Center. While most know the Doobie’s as a slick MOR hit machine, the band’s early — and later —  work was blues-based enough to cover Sonny Boy Williamson. Guitarist/founder Pat Simmons’ nimble fingerpicked guitar playing, always included in their repertoire, is also spotlighted as the current lineup returns to their tougher blues-rocking and folkie roots.

Eli Cook, Hunt House (Marietta). With a voice that sounds like he gargles with whiskey, and a slide acoustic guitar attack to match, the Virginia-based Cook gets deep inside the Delta blues. He is still touring behind 2017’s High-Dollar Gospel, a rugged set that displays Cook’s raw, organic slide and fingerpicked style behind mostly blues originals that sound as if they are Howlin’ Wolf covers, which one of them is (a solo “44 Blues”).

John Hiatt, City Winery. The veteran Americana singer/songwriter shows no signs of slowing down as he pushes 70, even if his voice gets gruffer with age. He’s promoting 2018’s The Eclipse Sessions — somewhere around his 24th studio effort — but this solo gig at the intimate Winery allows him leeway to pick and choose from dozens of songs in his influential catalog.

The Flatlanders, City Winery. Joe Ely, Butch Hancock, and Jimmie Dale Gilmore are all veteran Lubbock, TX-based singer/songwriters that have vaguely slotted into “outlaw country.” They don’t release much material (their newest album is a decade old), but each is a headliner, and the combination makes for a dream team of some of Texas’ most edgy and organic songwriting singers.

Crystal Bowersox, City Winery. Earthy singer/songwriter Bowersox never fit into the slick “American Idol” shtick. So it’s no surprise she’s been on the road since coming in second on that show in 2009, playing smaller venues where her mix of soulful bluesy folk connects far better than in larger arenas, let alone TV. Her latest live album captures her intimate and often explosive, throaty vocals.

The Avett Brothers, Fox Theater. This wildly successful band took country and bluegrass to the next level with explosive live shows that are as much rock as roots. This two-night stand at Atlanta’s most iconic venue proves their enduring crossover popularity.

Blind Boys of Alabama, Eddie’s Attic. The legendary vocal group’s annual Christmas show is a sure sell-out (even at $50 a pop), but there’s little more thrilling than hearing these soaring gospel voices singing often rearranged holiday and church fare in such an intimate venue.

ATL Collective plays Grateful Dead’s American Beauty, City Winery. The high quality of the revolving-door players in the ATL Collective guarantees their shows are far above the usual cover bands that populate any given bar on weekend nights. They tackle what is arguably the Dead’s finest studio album and, with Pigpen’s tough “Operator,” one that adds potent blues to the rootsy tunes. Since there are only ten tracks, expect other Dead gems from the era and lots of extended jams.

Mavis Staples, City Winery. Rescheduled from October. Yep, she’s an American gospel icon. But at 80 Mavis Staples is on a roll. She has released two albums — one studio, one live — this year alone. And her larger-than-life personality radiating love and harmony will be even more powerful in such an intimate venue.

The Brian Setzer Orchestra, Cobb Energy Center. He’s BAAACK. Sixteen years along, Setzer’s rousing and colorful swivel-stick and rockabilly Christmas Rocks! tour is as much a part of the season as getting wasted at the company holiday bash. And way more fun.