GRAZING: Eat calmly: Your panic is weaponized by the authoritarians 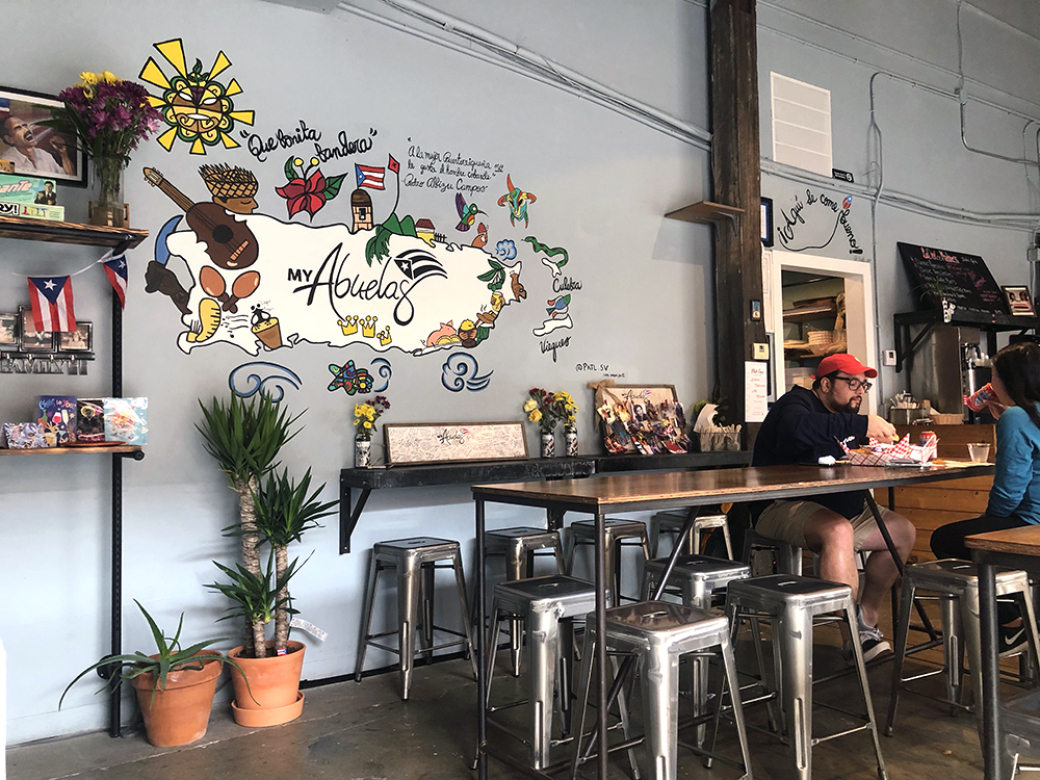 Photo credit: Cliff Bostock
PUERTO RICAN PRIDE: The interior of My Abuelas at The Spindle.
By Cliff Bostock Monday April 6, 2020 11:32 am EDT

It’s hard to write enthusiastically about restaurants when they’ve become precarious stages for a public health drama. As I am writing this, Mayor Bill de Blasio has ordered New York City restaurants and bars to close and, just as I turn this in, Mayor Keisha Lance Bottoms has mandated the same for Atlanta. The coronavirus pandemic is causing mass hysteria unlike any most Americans have seen since 9/11.

It will get better. I am unfortunately old enough that I remember several scary national dramas. One that keeps coming to mind is the Cuban Missile Crisis, when neighbors were building fallout shelters to survive a nuclear attack by the Soviet Russians. Like now, everyone was hiding at home except to rush to the grocery store to buy canned food to eat while the expected radiation kept them underground. Many parents kept their kids out of school for a few weeks. Years later, it was clear that the nuclear flames of catastrophe were greatly fanned by our government’s lack of preparedness and its wounded ego. Sound familiar? Fast forward to the early ’80s and we had a president — a showman like today’s — who ignored the AIDS epidemic for several years, giving the disease a head start. Conservatives, backed by evangelicals, used the crisis they first ignored to validate their homophobia and authoritarianism, even threatening to put gay men in concentration camps. That is what worries me most. Authoritarians like Trump amplify crisis and fear to seize more power. Trump is gloating, for example, because the crisis has led the Fed to feed his greed.

My apocalyptic political fears aside, what are reasonable responses? A growing number of states and municipalities have closed restaurants and bars, but not entirely. It’s important to keep in mind that it’s not food itself that poses a hazard. The closings are mainly related to the need to create “social distance” to reduce the ease of transmission. Thus, customers suffer no risk by ordering food to go or for delivery. Many restaurants that did remain open for full service before the mayor’s decision, had taken precautions, such as clearing space by reducing the number of tables, and radically increasing sanitation practices. When I sat at Starbucks soon after the panic began, staff members were wiping tables clean every 30 minutes. Nonetheless, an employee told me that the iconic coffee shop may limit business to window takeout (like so many others). [On March 21, Starbucks issued the following statement: “We have temporarily closed our in-store cafes, but select grocery and drive-thru locations remain open. Starbucks Delivers on Uber Eats is also available in select markets. Visit our store locator for the latest store hours and open locations. — editor]

It’s also important to keep in mind that a radical reduction in clientele has devastating effects in an industry with a relatively narrow profit margin. Too many restaurants are employing the well-known tactic of denial. When I asked Jason Hill, owner-chef of Wisteria, if he had lost business as of March 15, he said, “We all have. Anyone who says different is lying.” He is nonetheless optimistic, noting that people have emptied grocery stores. “Because of that alone, we will all be slow for a few days.” He hopes diners will return, at least for take-out, when their cupboards are bare and their panic has subsided. Meanwhile, please don’t fall for creepy offers of $40 hand sanitizers or buy discount coupons for restaurant meals without calling ahead.

If you want a view of the way people in the industry are being affected personally, check out Bon Appetit’s ongoing reports from industry workers on their website. One of the writers is the always pull-no-punches Deborah VanTrece, owner-chef of Twisted Soul in Atlanta. She explains that she is at high risk herself because of asthma. While dealing with the duress of that, she saw her reservations drop 60 percent. Many report even greater loss of catering gigs. I’ve heard these complaints from other restaurateurs but they often are quickly followed with — I’m paraphrasing — a statement like, “Please don’t identify me; I don’t want to discourage customers and employees with disastrous predictions.”

VanTrece, however, points eloquently to the possibly immense personal cost of the epidemic: “Emotionally, I’m like, ‘What the fuck? What the fuck?’ To have gone through all I’ve gone through: trying to get a brick and mortar opened in the first place, being an African American woman in a man’s field, fighting my way through that to get into a position of respect and being able to mentor others, figuring out where the money’s gonna come from, struggling to survive the past few years, looking for good employees. Finally I’m up there at the top of my game. Who could’ve imagined a virus might be the thing to take small businesses like mine out of the game?”

It’s particularly difficult to see the way restaurant closings and cutbacks threaten the general well-being of industry workers. They are at high risk of infection, of course, but they are also notoriously low-paid, so losing hours has a quick and dramatic effect on many. One source of assistance to food service workers in crisis is Giving Kitchen (404-254-1227, #givingkitchen). The organization has invited those diagnosed with coronavirus in need of financial assistance to contact them quickly. They can also help those who have otherwise been affected by the epidemic. Giving Kitchen has assisted more than 4,000 workers since 2012, and I urge you to make a contribution.

A source of news and advice for staff and customers alike, is a new social media campaign, #AtlRestaurantsUnite, created by restaurant owners. You’ll find tips on everything from maintaining financial stability to creating social distance inside a restaurant. [https://garestaurants.org|The Georgia Restaurant Association provides industry updates. The incredibly prolific Beth McKibben of Eater Atlanta has been reporting the epidemic’s effects virtually minute-by-minute.

This will pass. The consequences may be overwhelming. Some estimates of infection — not death! — run as high as 60 percent of the population. Please help by continuing to patronize restaurants in any way you can (did I mention gift cards?). Make donations. Restaurants and bars have made Atlanta a vibrant city. If you act out of fear instead of kindness and reason, you will fuel those of our society who enlarge fiscal and political power by scapegoating and lying. 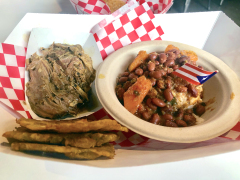 LOOKS ARE DECEIVING: While the pernil at My Abuelas looks like a few bites compared to the rice and beans, it's actually a fairly large serving. Photo credit: Cliff Bostock 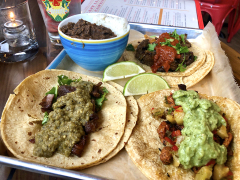 LAZY LLAMA: A trio of tacos with black beans and rice is likely more than you can eat. Photo credit: Cliff Bostock 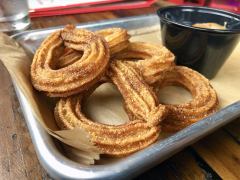 I’ve hit two new Latino spots in the last month. First up is My Abuelas (“Our Grandmothers”), a Puerto-Rican café at the Spindle Kitchen. The owner-chefs are Luis Martinez and Monica Martinez, who have been hosting pop-ups for nearly two years. If you’re not familiar with the Spindle, it’s a bike shop attached to a dining space in the Studioplex. It has hosted innumerable pop-ups and short-term tenants, but My Abuelas will be there for a year.

My Abuelas is not the first Puerto Rican venue in Atlanta. Hector Santiago of Pura Vida (R.I.P.), El Super Pan, and the new (more Mexican) El Burro Pollo set the bar here, but My Abuelas may give him a run for the money. The Abuelas menu is brief and changes frequently. During my recent visit, three entrees were offered. Two of them were vegetarian lasagna (pastelon), one vegan and one not. The third entrée, which my companion and I both ordered, was pernil — marinated, roasted pork. It was super juicy but I missed the crunchy skin that usually distinguishes the dish. It was served with tasty red beans and rice and basically tasteless, dry tostones. I have to say that the kitchen needs to work on presentation. Our (paper) plates were dominated by the bowl of rice and beans, while the pernil seemed to be hiding off to the side, masquerading as a smooth stone. It proved to be a larger portion than it looked. And that’s a good thing, given that the entrees are $15 each. Part of that is due to the restaurant’s use of sourced ingredients.

You can easily reduce the cost by grazing on starters and sweets. I ordered a chicken empanada that was huge and — no joke — among the best I’ve ever eaten. Others are available stuffed with meat or a meat substitute. Two of these would make an adequate lunch — especially if you order dessert, which you should. La Dolce Madness, a bakery, has joined My Abuelas at the Spindle. Definitely try the tres leches, a huge serving that you will devour all on your own. Because of a mix-up in our orders, Monica Martinez gave me a free, cakey pastry with, I think, a guava topping. It deserves praise, but I can’t imagine anything better than the tres leches.
My Abuelas, 659 Auburn Ave., 404-823-2046 thespindleatl.com

I’ve also visited Lazy Llama Cantina, a Tex-Mex pub that has replaced Hobnob at the corner of Piedmont and Monroe. Although I was annoyed that nobody could explain the name of the place, I did like most of the food. Consulting chef Jeffrey Gardner has created a menu of impressive tacos. I especially recommend the al pastor and the carne asada. These, like everything else, are composed in the kitchen so that you don’t get to ruin them by dumping, say, red sauce on top of green sauce fetched from a salsa bar.

I also liked a gigantic quesadilla filled with charred corn, browned mushrooms, red and green peppers, and a very small amount of cheese. I’ve sampled one dessert — the churros. They are fried until super-crunchy and served with chocolate and caramel sauces. The bar has a gigantic menu of tequilas, and the staff is great. They serve brunch on weekends, and there are regular nightly events. There are 20 TV screens for watching sports and about 12 portraits of llamas you can talk to after the mescal kicks in.
Lazy Llama, 1551 Piedmont Ave., 404-968-2288, lazyllamacantina.com

'The bridge from shame to pride is built of necessary anger and forgiveness' | more...
Search for more by Cliff Bostock