KING CRIMSON: Past, present, and future 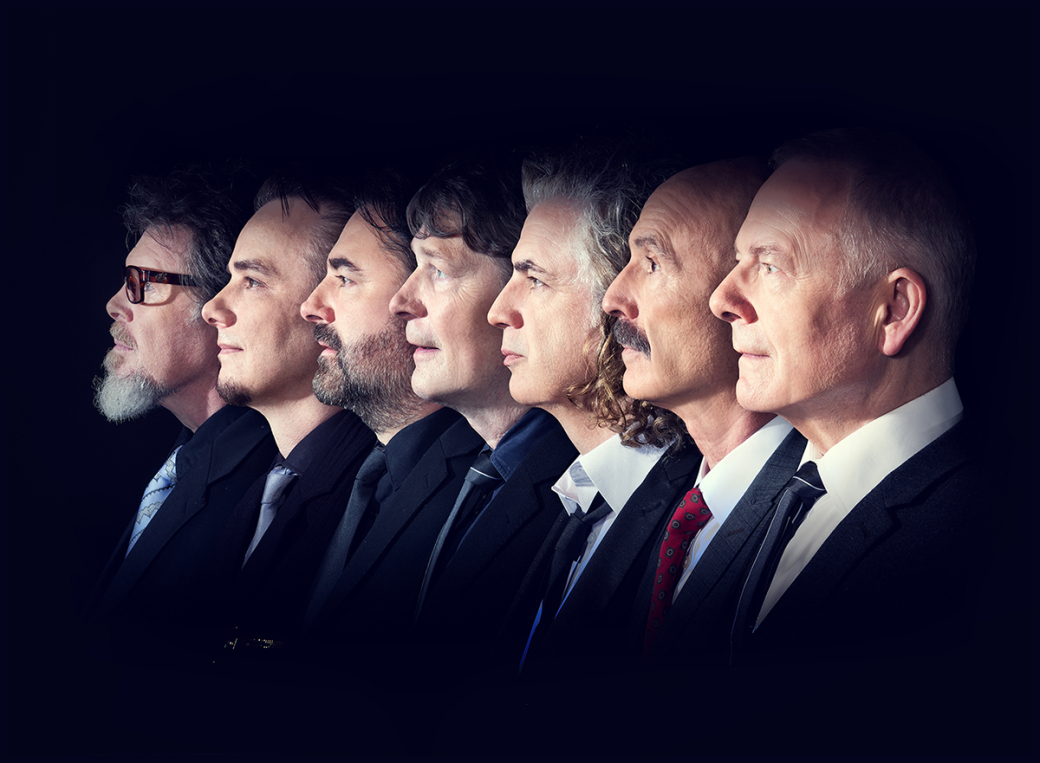 Photo credit: Dean Stockings
KING CRIMSON IS BACK: … and Robert Fripp is celebrating: “The crimson beast is in Go! mode. Totally excellent news! Much hooraying! Glad times are here! The Crimson Beast Of Terror has woken from its enforced slumbering and is venturing out to stomp flat the psyches of innocents not yet experienced in the hammering onslaught of King Crimson’s uncompromising pounding — bish! bish! bish! — before turning on a beat to jellify hearts with gut-wrenching passion and soul-squeezing epic unfoldings to remind us that we are all mere subjects in the unfolding drama of the universe’s unfathomable mysteries while simultaneously rocking out and having a great time bopping about with … (from left, Pat Mastelotto, Gavin Harrison, Jeremy Stacey, Mel Collins, Jakko Jaksyzyak, Tony Levin, and Fripp)” See the legendary band Tuesday, July 27, in a special, socially-distanced Fox Theatre setting.
By Tony Paris Thursday July 1, 2021 02:57 pm EDT

If you’ve followed King Crimson — and who hasn’t right? — since the Robert Fripp-led band first invited listeners into the court of the Crimson King in 1969, you know the band has gone through a lot of changes. We all have. King Crimson’s changes have always been instigated by guitarist/founder Robert Fripp. Regarded as an intellectual, a perfectionist, and even an eccentric, Fripp has steered the band through more turbulent waters than Poseidon ever encountered. Each change — in musical direction, in personnel, in musical lineup, in attack — always revealed a new, more inspired King Crimson. The current seven member lineup — featuring three drummers — is no exception.

Fripp has always been the constant in King Crimson, the mind, the heart, and dare I say, the soul of the band. Running a close second, in tenure, at least, is bassist Tony Levin, followed closely behind by Mel Collins on sax and mellotron, among other instruments. The King Crimson they perform in today seems warmer, more inviting, perhaps even somewhat whimsical — the current tour is named “Music is our Friend” — compared to the King Crimson of the past.

In the early ‘80s, I interviewed Bill Bruford, then drummer with the Fripp, Levin, Adrian Belew quartet that recorded three albums, Discipline, Beat, and Three of a Perfect Pair. At the time, his description of being in the band was anything but relaxed. 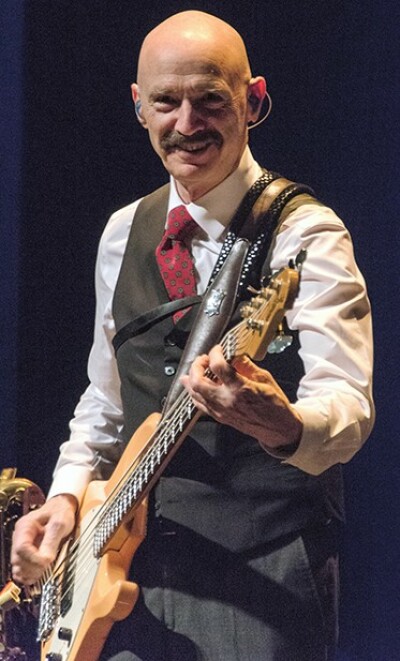 “The line ‘I knew the job was dangerous when I took it’ is becoming the group motto,” he told me during an interview in a now long-gone Buckhead hotel. “It’s not all sweetness and light. King Crimson is a provocative band. It creates very strong feelings in a lot of people, some of which can be extremely negative or rampantly positive. But mostly, it incurs a lot of feeling. It is a dangerous job, but it can be very rewarding.”

When asked recently if I was interested in an interview with Tony Levin, who played with Bruford in that incarnation, I thought I’d send him a copy of the now 40-year-old article and ask him to respond in an email with his observations on the piece in which, Bruford noted, musicians who play with Fripp “must have a certain resilience and stamina. He’s not to everybody’s temperament. He’s a very extreme and unusual character. He describes the ball park and we go play the game on it.”

Levin responded without hesitation. “I am laughing as I respond to that question — certainly a lot has changed in the band in all these years … possibly more than could change with any other band. We’ve gone from quartet to septet, with stops along the way with 5, 6, and 8 players. Gone from one drummer to three. Gone from refusing to play any ‘classic’ Crimson material to offering pretty much all of it. Gone from one hour shows to three hour shows. Gone from wearing jeans to wearing suits. Maybe it would have been easier to consider what has stayed the same: that would be the band’s outlook about our music, trying to play in ways we haven’t done before, even if it’s material we’ve played before. Trying to truly be a progressive ensemble, and doing whatever it takes to implement that.”

Indeed, Levin sums up the current state of King Crimson nicely — always looking to the future, always looking ahead. With the 21st century having been in the band’s sights since its inception, those involved are still venturing further. —CL—