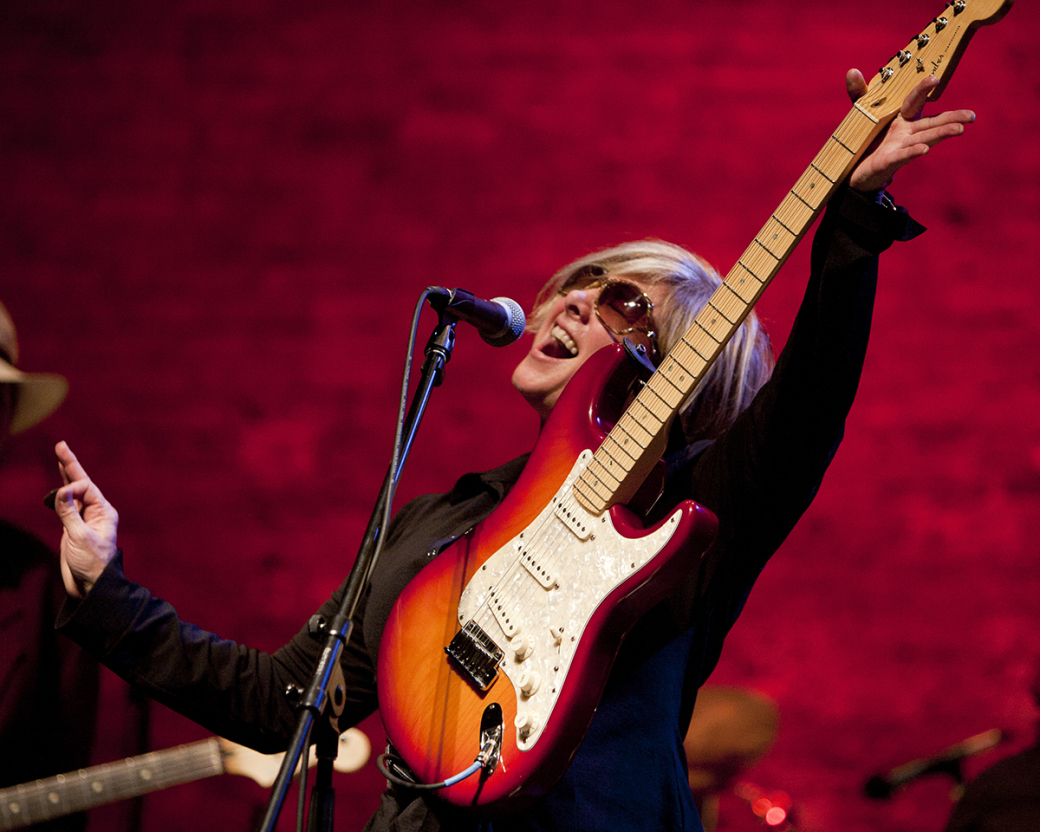 It really shouldn’t be a big deal to have a concert dedicated to women playing the blues. After all, they have a storied history in the genre dating back to 1920.

That’s when Mamie Smith is credited with “Crazy Blues,” reportedly the first female blues recording. After she got her foot in the door, others such as Ma Rainey, Ida Cox, Lucille Bogan and of course Bessie Smith soon made their way through it. The list of famous, sometimes infamous, blues women is too long to list, but highlights include Big Mama Thornton, Nina Simone, Billie Holiday and Sister Rosetta Tharpe. In more contemporary roots music, there is Janis Joplin, Bonnie Raitt, Susan Tedeschi — you get the idea.

Even locally, the blues scene boasts plenty of talent with the late Beverly “Guitar” Watkins as one of Atlanta’s most prominent and gifted players. Others, such as Francine Reed and the city’s own Empress of the Blues, Sandra Hall, have kept the female fires stoked on the Atlanta blues map for decades. Still, having an entire evening featuring only local women not just fronting blues bands but also working as supporting musicians is something we, and virtually every other city, severely lacks.

At least that’s what George Klein, co-coordinator of the Atlanta Blues Society (ABS), felt back in early 2019. He composed a list of 20 women, all members of the Atlanta Blues Society, who played every instrument (except harmonica). “The initial concept was to highlight women who don’t get a lot of recognition because they’re in a band full of guys,” he told me. Klein also realized he wasn’t qualified to put together a concert of women in blues.

Klein knew she had her own band, toured extensively, and had enough contacts through various organizations to pull together a quality show. He also didn’t want to micromanage the project, so he provided the budget (ABS fronted the money) and turned her loose. “I’m happy that they contacted me because I really respect the ladies who are doing blues and roots here,” explains Durrett. “I wanted it [the show] to be where you could hear something about each player, not just the lead person — what they have been doing and what they have done in their career.”

The result, Women in Blues — the three-hour Sunday afternoon gig in June, 2019 — was a huge, sold-out success. Participants included obvious choices like Donna Hopkins, Hall and Durrett along with less known locals, such as Melissa Junebug, Kiana Gibson, Sandra Senn, Carly Gibson, Fuji Fujimoto, Tamara Nicolai and Kathie Holmes. Even Liz Melendez, who had taken a break from playing to go back to school, made an appearance. Everyone was ready for the concert in 2020 … before the pandemic took away that option.

Women in Blues is planned to return Oct. 15 of this year, not at Blind Willie’s as initially scheduled (thanks to the recent surge in COVID-19 cases), but at Tunes by the Tracks in the city of Stone Mountain. And, yes, Durrett will be back at the helm. It will be another diverse, three-hour extravaganza. “It’s all professional women,” she says. “The age range is 18 to seniors.” The venue is now outdoors due to pandemic precautions, and there is no admission charge.

Durrett wants to honor historic blues women, like Koko Taylor and Etta James, as well as “newcomers,” like Bonnie Raitt, with performers covering the classics. But she encourages the acts to include original material as well to keep the presentation fresh.

Many of the same names from 2019’s event will appear again, with Hall likely headlining. But, as of press time, the roster was still in flux. All the players Durrett invited to perform at the first event showed up “as long as they were available.” Since that late afternoon Sunday show was so well received, Durrett is expecting the same level of participation. Still, there is limited time and budget, so she has to make the final call. There aren’t rehearsals, but each act comes prepared with songs submitted in advance to prevent duplication.

Not surprisingly, things are slightly different in 2021 due to pandemic pressures, but Durrett is working on videotaping the event to save it for posterity, something that didn’t happen in 2019. The prospects of this being a biannual event instead of just once a year is also a possibility.

Those expecting a loose-knit jam or a backline with a variety of lead women should be aware that it’s a much more organized, and varied, gig. “I wanted to be able to showcase the other instruments that women play. We perform different songs, but it’s a structured event where people play with different groups. It’s not a jam,” Durrett says emphatically, “You’re gonna get a show!” —CL—


N.A.S.H., Blind Willie’s — Nick Johnson’s stinging guitar leads this recently formed, local four-piece that is quickly garnering a following. Check out this talented group now and see what the excitement is all about.


Gregg Allman’s Laid Back Legacy, Variety Playhouse — Orig-inal players from Allman’s legendary 1974 album and tour — Randall Bramblett, Tommy Talton and the rhythm section of Charlie Hayward and Bill Stewart — lead an 11-piece ensemble with horns through the songs from Allman’s first solo album along with a few Allman Brothers classics. This ensemble has been playing these tribute shows for a few years now, incorporating the brotherhood and spirit that made that album and subse-quent tour so special.


JJ Grey & MOFRO, The Eastern — Grey and his ever-changing backup band MOFRO haven’t released an album in six years, but that won’t make any difference since his swampy soul music has remained consistent since his days playing Smith’s Olde Bar back in the early ’00s. The group has pushed closer to a more commercial sound over the years, yet Grey’s bluesy heart and gritty vocals have always kept the rootsy faith.


Michelle Malone, Eddie’s Attic — “Moanin’” Malone needs no introduction to any blues or roots fan. She has been a constant presence on the Atlanta scene since the early ’90s. She’s back in her old stomping-ground venue for two shows that will surely include at least a few songs from an upcoming album along with plenty of favorites from her extensive catalog. 7 and 9 p.m.


Son Little, City Winery — Three albums into his career, Son Lit-tle’s combination of blues, soul and a bit of hip-hop has been well enough received for him to get the nod as producer on a Mavis Staples EP. Mix Prince with Michael Kiwanuka, and you’re close to Little’s unique, some-what retro sound and sweet, soulful voice.


Eddie 9V, Cody Matlock, Eddie’s Attic — These two friends and Blind Willie’s mainstays hike out to Decatur where their soul blues ought to go down just fine in the more reserved confines of Eddie’s Attic. Both in their mid-20s, they are the most prominent local young blues players in town. Eddie’s recent Little Black Flies release has right-fully attained international acclaim. Catch them now at this intimate club before they move on to larger venues.

Charley Crockett, Variety Playhouse — Even heart surgery in 2019 couldn’t slow down roots singer-songwriter Charley Crockett who has released five albums in the past six years. Once a blues and soul man, Crockett has shifted to a pure honky-tonkin’ country singer, a transi-tion that has been more logical than it sounds. His 2020 Welcome to Hard Times release was one of the best indie country albums of the year.

Eric Clapton, Jimmie Vaughan, Gas South Arena — Slowhand has been in the headlines recently more for his anti-vax stance than any new music. His hand is definitely getting slower these days as he moves through his 70s, and health issues have unsurprisingly curtailed his tour-ing. He’s a living legend though, so tickets for other-than-nosebleed seats are exorbitantly priced. Even if his fire might be muted, his band is always filled with top-notch veterans, and this may be the last chance you get to catch him live. Perhaps if opener Vaughan shares the stage for a few songs, there may be some fireworks generated. But no guarantees.

Cracker, Eddie’s Attic — Back in the day — that being the early ’90s — it was impossible to turn on album rock radio and not hear at least one Cracker song like “Low” or “Euro Trash Girl” in rotation. That time has long passed though, and it has been eight years since the band led by David Lowery and Johnny Hickman has released new music. Regardless, they still tour — sometimes as a band and other times as a duo — sound-ing tough and tight with their tongue-in-cheek lyrics and bluesy rocking Americana, which still feels fresh if not quite as edgy as it used to.


Jorma Kaukonen, City Winery — Former Jefferson Airplane and off again/on again Hot Tuna guitarist, Kaukonen has been — and remains — one of the finest practitioners of pure country blues guitar. Ex-pect plenty of old-time blues covers, especially a few from the Rev. Gary Davis, one of Kaukonen’s biggest influences, along with similarly styled originals. If we’re lucky, he’ll give us a few minutes of his Airplane classic “Embryonic Journey.”


Bobby Rush, City Winery — There is no stopping the irrepress-ible 88-year-old Bobby Rush. The veteran bluesman is riding high on his acoustic, Grammy-winning Rawer Than Raw, so he may not bring the full contingent of backing band members and singers along. Regard-less, he’s a force of nature who has been blowing away audiences for six decades and shows no sign of slowing down. Pick up a copy of his newly published autobiography I Ain’t Studdin’ Ya: My American Blues Story while you’re there too.


Amplify Decatur, Downtown Decatur Square — It’s impossible to fault a lineup as strong and diverse as one headlined by the Indigo Girls and supported by the rollicking Old 97’s, the searing gospel of The Blind Boys of Alabama, the gorgeous Everly Brothers-styled harmonies of The Cactus Blossoms, and local roots icon Michelle Malone. And it’s out-doors too, which makes this a safer way to get your roots and Americana fix on.


EG Kight Trio, Eddie’s Attic — Nicknamed “The Georgia Song-bird,” Kight had to delay the release of her acoustic album The Trio Sessions, but it’s out now — and she’s touring behind it. The goat-loving singer-songwriter-guitarist was a close friend of Koko Taylor and has a voice nearly as powerful. She is an under-recognized, locally born and bred, veteran musician who never disappoints live. In her new “Feel-in’ a Healin’” Kight has written one of the year’s finest soul and blues pan-demic songs, a tune that looks forward to brighter days ahead.


Sean McConnell, Eddie’s Attic — Singer-songwriter McConnell, a recording artist since 2000, spent time in Georgia before relocating to Nashville where he penned tunes for major acts like Brad Paisley and Tim McGraw and became a producer. His latest and 10th release, A Horrible Beautiful Dream, is one of his most powerful and emotionally af-fecting yet.


Wire and Wood Festival, Alpharetta, Georgia — Thirty artists, six stages and two days outdoors in the cooler early October weather — What’s not to like? And it’s free! Ruthie Foster and Drew Holcomb & the Neighbors top the bill for this singer-songwriter fest. However, at press time they were the only acts advertised. You may not recognize many names, but you never know which ones will become famous later. So chill out in low-key Alpharetta, appreciate the end of summer weather, and get acquainted with some new acts while enjoying the headliners. —CL—