LISTENING POST: The Atlanta Opera — ‘The (R)evolution of Steve Jobs’

An interview with composer Mason Bates 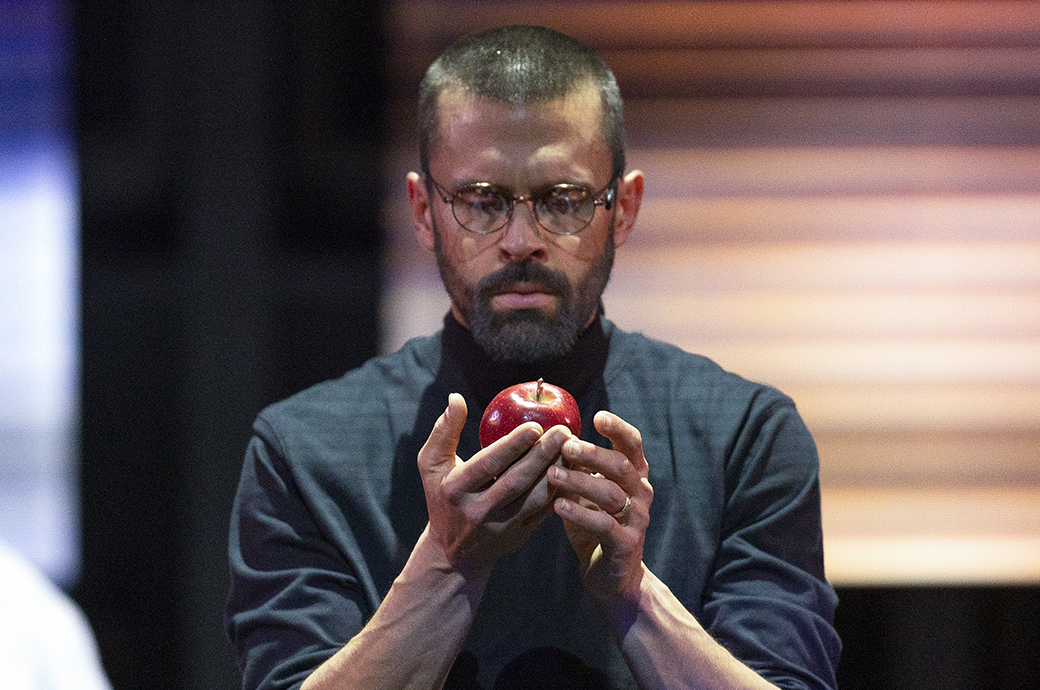 Given opera’s origins as a 16th century movement spawned by the desire to revive Greek drama, it seems inevitable that Steve Jobs, the tyrannical visionary who, as founder of Apple Computer, changed the world of modern communication (for better and worse), would become the subject of a 21st century opera production.

The Atlanta Opera’s production of The (R)evolution of Steve Jobs with a score by DJ and composer Mason Bates and libretto by Mark Campbell runs from Saturday, April 30 through Sunday, May 8. Directed by Tomer Zvulun, General and Artistic Director of The Atlanta Opera, this new production was developed from the original Grammy-winning version, which premiered in 2017 as a co-production of the Santa Fe Opera, San Francisco Opera, Seattle Opera and the Jacobs School of Music at Indiana University.

“We have been utilizing the concept of co-productions throughout my tenure here in productions such as The Flying Dutchman, Eugene Onegin and Silent Night,” said Zvulun in an email to Listening Post. “This concept allows us to create new productions with high artistic values while sharing the expenses with other opera companies. The added benefits are PR, social media and travel opportunities for our patrons.”

“This idea allows us to shorten the rehearsal period and cut down on costs relating to rehearsal, costumes, staging and other elements,” Zvulun said.

Much interest in The (R)evolution of Steve Jobs, has been focused on the score by Mason Bates whose work, according to the composer’s website, revolves around “the magical intersection between music and technology.” Indeed, the music for The (R)evolution of Steve Jobs is an engagingly propulsive mix of techno dance and familiar orchestral elements. Listening Post recently interviewed Bates by phone from Miami about his operatic work.

__Listening Post: New operas about recently deceased contemporary figures are a rare breed. John Adams’ Nixon in China comes to mind, but not much else. How did you approach writing the score for The (R)evolution of Steve Jobs?

Mason Bates: It’s almost as if you're dealing with an opera about Jesus or Satan or anybody else with whom everybody has some sort of relationship. Steve Jobs is both a protagonist and antagonist. Love him or hate him, across the board, everybody has a relationship with him because they carry around these innovations in their pockets and they all communicate through his devices.

Listening Post: The subject is certainly rich with angles to explore.

Mason Bates: It's got betrayal, obsession, sex and death. It's got massive human emotions played out on a big scale. John Adam's once said he felt “pregnant with royal air” when he was working on Nixon in China because everybody was so curious about what he was doing. I understand that feeling. For the three years I was working on this piece, everybody was checking in with me as we were writing.

Listening Post: Speaking of John Adams, I hear certain parallels between his music in your score.

Mason Bates: John is a friend and a mentor. He has conducted my music and I often take him my latest work and we go over it together. So, absolutely John Adams is informing my music in some way. One place where we're a little different is that I'm really interested in exploring the depth of each person. John’s operas and orchestral works tend to deal with these incredible texts and monumental topics, such as the atom bomb [Doctor Atomic – LP] and Mary Magdalene [The Gospel According to the Other Mary — LP], which require creating a certain type of memorable music, whether it be in the form of leitmotif or specific themes.

Listening Post: In interviews you talk about being a true fan of opera, not just coming to the form because you received a commission. How does this appreciation for grand opera weigh on the music of The (R)evolution of Steve Jobs?

Mason Bates: While there is an electroacoustic circuit running through the piece and the storyline is nonlinear, there are also elements that the audience will immediately recognize as being within the bounds of the operatic tradition. I love having a beginning, middle and end to an aria, and a title, which sounds almost like something out of a musical theater production. Only in the past 50 years or so have composers started moving away from showcasing singers the way they previously did. And this business of character, which I mentioned before, is so important. You have to really believe in the characters and fall in love with them, even if eventually you end up despising them or feel betrayed by them.

Listening Post: One of the unusual aspects of The (R)evolution of Steve Jobs is the use of amplified voices. Explain why the decision was made to mic the singers?

Mason Bates: You need to confront the issue that electronic sounds behave differently than acoustic sounds, requiring a balance between the two. Sound reinforcement is not the same as it was ten or even 20 years ago, when the difference would be pretty obvious. Nobody wants to hear a singer mediated by bad micing, but having a little support opens up a lot of doors. It's part of the arsenal of the 20th century composer. If you go to a Broadway show, you will hear an extreme version of amplification. We use a pretty subtle approach. In early productions, a lot of people weren't sure whether the voices were, in fact, amplified.

Listening Post: One of the distinguishing elements within the score of The (R)evolution of Steve Jobs is the use of the guitar and particularly what you have referred to as the “fingerstyle tradition.”

Mason Bates: I was trying to find an instrument to represent Jobs’ busy inner soul and the nervous energy he radiated. The great thing about the guitar is that, when you use the intricate finger-picking, which you hear in blues or bluegrass, a simple chord generates all this energy. You get a kind of creative nervousness buzzing around. The other thing is that, in the history of opera and the voice, plectrum instruments were not uncommon as accompaniment. Monteverdi uses a harp and lute in L’Orfeo. In Mozart’s Don Giovanni, the title character serenades a woman while playing a mandolin. I can't believe it hasn't happened more often.

Listening Post: Jobs has been famously quoted as saying doing LSD was one of the most important events in his life. How does The (R)evolution of Steve Jobs treat this aspect of the man’s life?

Mason Bates: It's an important scene in the opera. Jobs is in an apple orchard with his longtime girlfriend, Chrissan, who would eventually become the mother of his daughter. He has a vision about hearing instruments. Later in the opera, he has a revelation about computers being the smooth, sleek devices that we know today. He remembers the earlier vision, imagining the instruments of the orchestra as perfect examples of the interface between humans and machines. Jobs’ experience with LSD, like his immersion in Zen Buddhism, demonstrates his curiosity about the world beyond selling products.

Listening Post: In particular, how does that experience manifest in the opera’s score?

Mason Bates: When Jobs is in the apple orchard, he starts hearing different sections of the orchestra. In the score, there are psychedelic swells of brass, winds and strings. Then there's an electronic component in which you hear a quote from J.S. Bach’s The Well-Tempered Clavier played on a kind of guitar. Think of Pink Floyd soundscapes during the Roger Waters era or something like that. In a sense, orchestras have turned out to be great synthesizers.

Listening Post: Toward the end of Jobs’ life, there's this whole tragic episode involving missed opportunities to treat his illness and, instead, opting for alternative therapies. How did that experience influence the narrative of the opera and the score?

Mason Bates: Jobs wanted to control everything. He wanted to control everybody. Everybody to him was like one button on an iPhone. That’s exactly what was going on with his cancer. He was trying to combat his cancer with health foods, you know, carrot diets. There is speculation that, had he immediately undergone chemotherapy, he could have beaten it. Right there is the central fascinating, tragic crux of Jobs’ fatal fall.

Listening Post: How did that set of circumstances influence the music?

Mason Bates: The opera moves from a tech world in the beginning to, by the end, this giant bear hug by a grounded, soulful element. Things get very lyrical, the harmonies get much richer. By the time you get to the last quarter of the opera, it, it becomes a much different piece, much more poignant.

Listening Post: Talk about the working relationship between you and Mark Campbell, the librettist.

Mason Bates: We met many times early on before a word or note was written to talk in broad terms about the opera. Once Mark started writing, I would send back some of his lines as arias with requests along the lines of: Can this little passage be more structured? Could we have a catch-phrase that encapsulates this or that aria? Mark is an incredible wordsmith, and has a background in marketing. He was great at coming up with pithy lines, such as “an interface only a motherboard could love.”

There was some productive friction. Sometimes, I would be pushing for something that Mark felt wasn't appropriate. For example, I wanted more rhyming and he would respond in a brilliantly creative way, for example, by creating internal rhymes. It wasn’t always easy, but it was a great collaboration.

Listening Post: What about the collaboration with Tomer Zvulun, which produced this new version of The (R)evolution of Steve Jobs?

Mason Bates: A couple years ago, Mark and I met with Tomer and Nathan DePoint, Senior Director of Artistic Operations at the Austin Opera, in San Francisco. Tomer had this vision of a new production that could be done almost anywhere in any size theater. The production has many incredible components including six moving monoliths, which are like giant iPads moving around the stage and have projections on them, within and without. The other thing Tomer brought to the production, beyond the design elements, was that he really wanted to tell this story in a way that made you both love and hate Jobs. Dealing with Jobs in that way has been really important for this production. It's incredibly moving and John Moore is phenomenal as Steve Jobs.