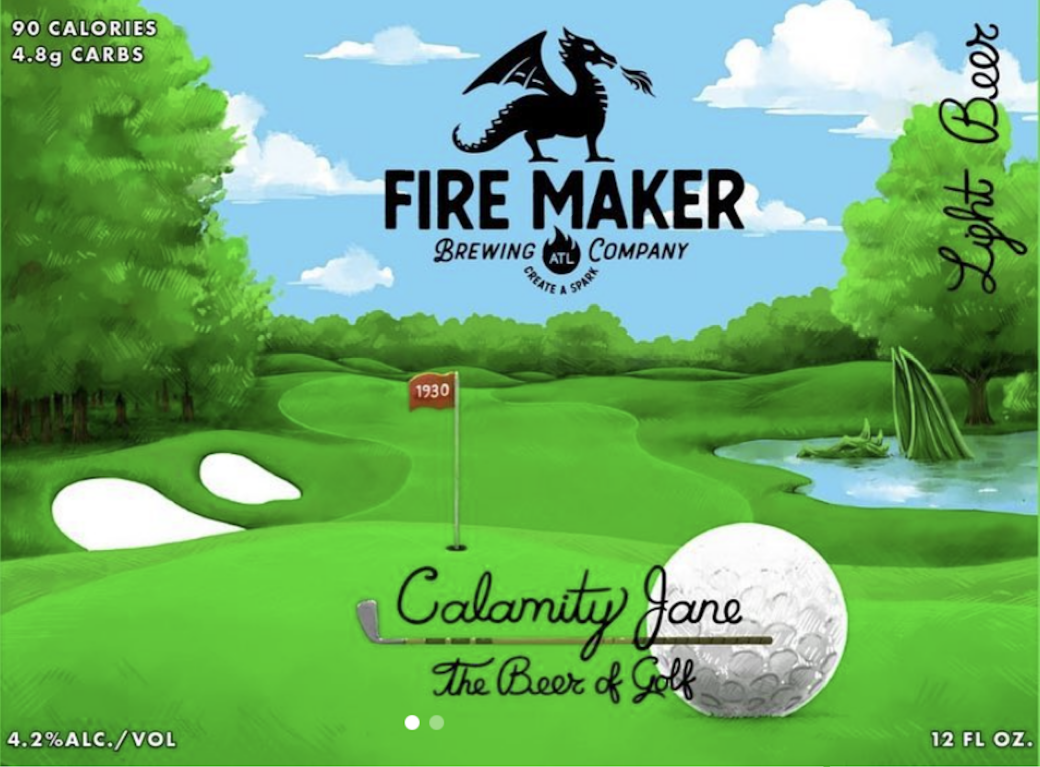 Fire Maker Brewing in West Midtown just released Calamity Jane, a light beer made by golfers, for golfers. The name comes from the famous putter that golf legend Bobby Jones used to win 13 major championships. In addition to being available in their taproom, it will also be available soon at all golf and country clubs in Georgia. Check out our Fire Maker Brewing podcast!

Join Three Taverns Brewery in Decatur for the release of Pilsen Liberation this Saturday, June 4, starting at noon, when they will be pouring their new collaboration with the famous Pilsner Urquell brewery in the Czech Republic. They’ll also have specialty food for the event and a local artist market. Check out our Three Taverns Brewery podcast!

Join Best End Brewing in the West End for Pride Saturday on June 4 from noon until 2 a.m. Show up in your pride colors for 15 percent off your order! They’ll have live music and special food as well as a Bridgerton costume contest for prizes that starts at 10:30 p.m. Get your tickets here.

Join Atlanta Brewing Company on the Westside Sunday, June 5, from noon-4 p.m. for Gears and Beers, this time featuring all air-cooled and/or water-cooled Euro cars.

If you’ve ever wanted to learn improv, join now is your chance at Arches Brewing in Hapeville on Sunday, Jun 5 from 10:30-noon for a beginner’s workshop — with Dewey!. You can sit and watch or join in for the fun — get your tickets here.  Check out our Arches Brewing podcast!

Check out the Glover Park Brewery Art Market on Sunday, June 5 from 12:30-7:00 p.m. featuring a Father’s Day pop-up with artists ranging from ceramics to candles to jewelry and more. They’ll also have a food truck and great beer! Check out our Glover Park Brewery podcast!

If you want to earn your beer, join Pontoon Brewing in Roswell for a Chattahoochee River Hike and Beer Tasting on Thursday, June 9, from 4:30-7:30 p.m. REI will be there to explore some trails, then enjoy a refreshing beer sampler or pint — first round is on Pontoon! They’ll also have trivia later that evening.

Join Biggerstaff Brewing in Old Fourth Ward for a low country boil Sunday, June 12, from 1-5 p.m. Your $16 ticket gets you a half dozen shrimp, potatoes, sausage, and corn, plus a pint of your choice! They’ll also have live music and their usual beer selection.

Saturday, June 18, from 11-4 p.m., celebrate Grant Park’s Elsewhere Brewing’s First Anniversary with a Drag Brunch! There will be two different seatings. Get your tickets here.

Enjoy the BreakFestival at Wild Leap Brew Co in LaGrange on Saturday, June 18, from 6-10 p.m. for a full night of your favorite breakfast and brunch foods with six food vendors, rare beers, brunch cocktails, live music, and more! Check out our Wild Leap Brew Co podcast!

StillFire Brewing in Suwanee will hold their Summer Jam 90s Party Saturday, June 18, starting at noon. They’ll be playing 90s-themed music in addition to live music from Mud Donkey, American Gladiator jousting, and delicious 90s snacks and food trucks. They’ll even have prizes for the best dressed! Check out our StillFire Brewing podcast!

West Midtown’s Fire Maker Brewing celebrates their Honahlee-Land festival on Saturday, July 30 from noon until midnight! Frolic with the brewery as they present a great lineup of music and beers at this mash-up of music festival, beer festival, and DragonCon!

Tucker Brewing is getting ready for the fall early this year, celebrating the release of their Tucktoberfest Marzen Lager release Thursday, Aug. 4, from 4-9 p.m. They’ll be doing growler giveaways every hour on the hour.

Steady Hand Beer (1611 Ellsworth Industrial, Atlanta) has a trivia night every Tuesday at 7 p.m., and you can play for gift cards and beer.

Peachtree City’s Line Creek Brewing (150 Huddleston Rd) celebrates Taco Tuesday every Tuesday from 4-9 p.m. through the end of May with the help of Georgia Tacos.

Join Trivia Night at Social Fox Brewing (20 Skin Alley, Norcross) every Wednesday from 7-9 p.m.  Beer and prizes to the top team each week.

Join Second Self Beer (1317 Logan Circle, Atlanta) for Game Night Thursdays from 5-9 p.m. featuring a different video game each Thursday in addition to board and arcade games!  They’ll also have $10 pitchers available.

Ironshield Brewing (457 N Chestnut St, Lawrenceville) features board game night with the Gwinnett Board Game Society the first and third Thursday of every month—everyone is welcome!

Social Fox Brewing (20 Skin Alley, Norcross) features their own game show called “Fox Feud” based on the popular survey game show.  Teams can have as many members as you want and play absolutely free!

Social Fox Brewing (20 Skin Alley, Norcross) is now a proud sponsor of the Atlanta Gladiators and you can purchase some of their brews at Gas South Arena! You can also watch all the Gladiators away games in the taproom now through Apr. 16!