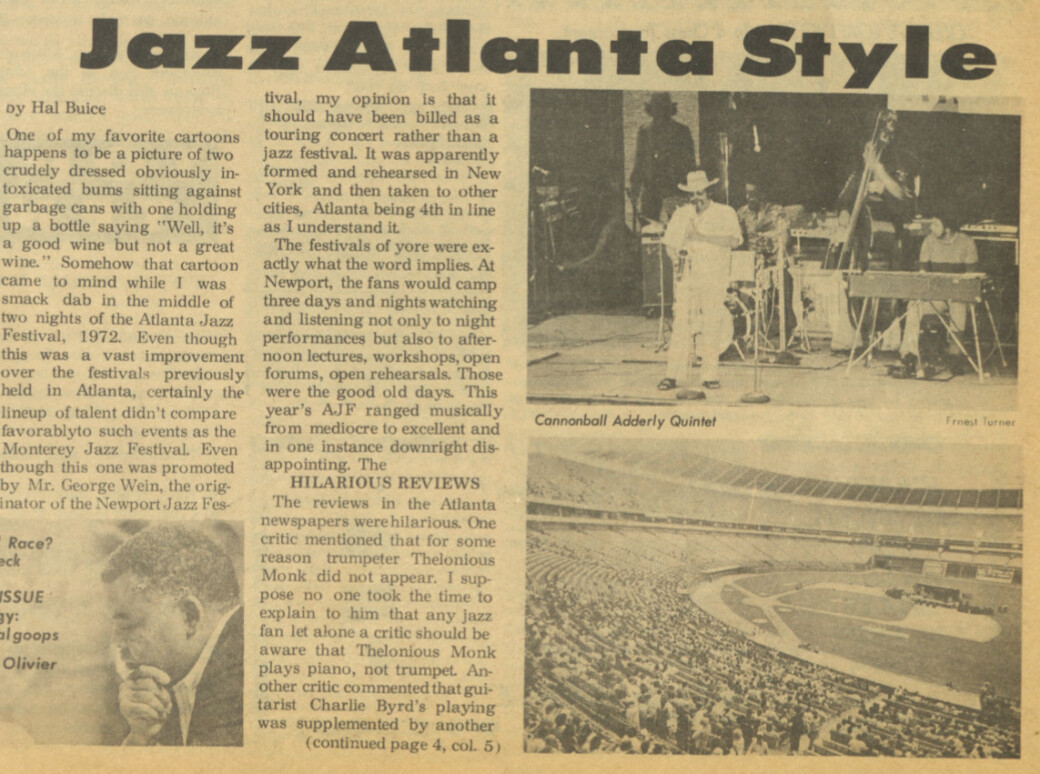 One of my favorite cartoons happens to be a picture of two crudely dressed obviously intoxicated bums sitting against garbage cans with one holding up a bottle saying "Well its a good wine but not a great wine." Somehow that cartoon came to mind while i was smack dab in the middle of two nights of the Atlanta Jazz Festival, 1972. Even though this was a vast improvement over the festivals previously held in Atlanta, certainly the lineup of talent didn't compare favorably to such events as the Monterey Jazz Festival. Even though this one was promoted by Mr. George Wein, the originator of the Newport Jazz Festival, my opinion is that it should have been billed as a touring concert rather than a jazz festival. It was apparently formed and rehearsed in New York and then taken to other cities, Atlanta being 4th in line as I understand it.

The festivals of yore were exactly what the word implies. At Newport, the fans would camp three days and nights watching and listening not only to night performances but also to afternoon lectures, workshops, open forums, open rehearsals. Those were the good old days. This year's AJF ranged musically from mediocre to excellent and in one instance downright disappointing.

The reviews in the Atlanta newspapers were hilarious. One critic mentioned that for some reason trumpeter Thelonious Monk did not appear. I suppose no one took the time to explain to him that any jazz fan let alone a critic should be aware that Thelonious Monk plays piano, not trumpet. Another critic commented that guitarist Charlie Byrd's playing was supplemented by another guitarist. This critic I suppose has never seen an electric bass therefore we should all let that faux pas just lie there on the printed page. I think both of the critics concurred that the acoustics left nothing to be desired, when in actuality the sound was good with small ensembles, bad for larger groups and downright disgraceful for anything done vocally.

So, 7:45 Friday evening, a somewhat sparse audience eagerly awaited the start of what promised to be an exciting night of jazz and blues. Even though there were several performers, one got the definite feeling everyone was really there for one reason - Ray Charles and his 23-piece musical machine.

Promptly at 8, a voice wafted across the infield - "ladies and gentlemen - welcome to the Atlanta Jazz Festival, 1972. We are proud to present the "Charlie Byrd Trio" whereupon the trio walked out on the stage and Charlie Byrd sat down with his guitar and proceeded to "get it on."


By now, there was a considerably larger crowd (the Ray Charles feeling still obvious). It was beginning to get dark and Cannonbell Adderly Quintet appeared with one of the unsung heroes of the festival Mr. George Duke on piano and electric piano. His playing was superb and of course Cannonball offered his usual words of wisdom between tunes and even sermonized a bit. Before "Country Preacher," he verbally sympathized with those who have never "been exposed to or indulged in the black experiences." Then he soulfully dedicated the song to Rev. Jesse Jackson.

Total darkness now. And the audience of between 5 and 7 thousand knew that Ray Charles' time was coming. Sarah Vaughan and her trio were introduced and Sarah I think proved that she is still one of the all-time great jazz singers. A couple of her comments I could certainly identify with: after her opening tune, she made the remark that "the audience was so far away." The bandstand was approximately 50 yards to the closest seat. Of course she sand "Misty" but interjected a line: "I'm so misty cause bugs keep flying in my mouth." I broke up.

Next came the giants in the forms of Dizzy Gillespie, trumpet, Sonny Stitt, sax, Kai Winding, trombone, Art Blakey, drums and Big Black, congas. And once again George Duke filling in for the absent Thelonious Monk (piano not trumpet). What it came down to was an outstanding performance by George Duke and a percussion finale by Art Blakey and Big Black. This seemed to please the audience even though one could still sense the Ray Charles syndrome.

By now it was 11:30 and folks that is when everything came to life. The announcer simply said Ladies & Gentlemen, the king of blues, Mr. B.B. King.

He and his band completely broke it up at the Atlanta Stadium. The crowd started participating even on his first number "Everyday I Have the Blues" by clapping along. The second tune was instrumental featuring himself on the guitar with some of the most soulful traditional blues guitar I've heard in a long time. Next he did "Don't need no outside help" a slow blues with lyrics: "The iceman came this morning...didn't leave no ice...the postman came this morning didn't ring but twice" - he was getting some outside help and un-needed help! It continues - "so you can tell that iceman when he comes in the morning...he better leave some ice...and you can tell that postman when he comes in the morning he'd better ring more than twice...when i come home from work in the morning, there had better be some groceries on the shelf...and you can tell that slick-haired insurance man he better write insurance on himself."

By this time, King had complete control over the audience and the remainder of his performance was complete pandemonium. He played an up-tempo blues and i quickly noted that people were not only clapping along, they were up on their feet dancing. This caught on quickly and the B.B. King show turned into a complete frenzy of heavy blues singing and playing and the audience going crazy, freaking out and dancing. Needless to say, this warmed the cockles of my heart and we all know that there is nothing worse than cold heart cockles!

It took some time for the stage crew to set things up for the magic moment. Finally at exactly 12:15, a different voice came out of the darkness; Ladies & Gentlemen, the orchestra of Ray Charles - the spotlight hit and sure enough there it was - an 18-oiece "cookin' jazz band comin' on like a freight train." Ray has always had outstanding musicians and this was no exception. The band played a couple of tunes then the voice came out of the darkness again saying "and now, the genius - the Genius - the GENIUS of Ray Charles!" And everyone held their breath while Ray Charles got to the bandstand and proceeded to come unglued. The first four tunes were passable and a couple were even good, but after that, he lost the audience almost entirely with a blues thing apparently called "Do You Feel It?: It consisted of the band clapping a slow blues line while Ray warbled and screamed and whined with the words "do you feel it", being repeated continuously. He strung it out for 15 minutes and the audience not only didn't feel it, they took leave of the premises. Right in the middle of the tune, a gentleman seated directly behind me yelled "Man, you must be feelin' something I'm not" and headed for the exit. The remainder of the Ray Charles portion was a bummer. He concluded Friday's night's festivities by giving us some good musical advice: "let's go get stoned" and friends, it was the opinion of several people in the audience that Ray must have taken his only advice earlier in the day.

8 o'clock I found myself back at the Stadium once again to see if I could "feel it." Much to my surprise, the crowd was enormous. I suppose this was due to the promised appearance of Roberta Flack and the Ike and Tina Turner Revue.

Everything seemed to go much smoother than Fri. night and even though Lou Rawls was outstanding, Roberta Flack was dynamic. Dave Brubeck, Gerry Mulligan and Paul Desmond had a very good reunion, the ghost of B.B. King was still among us. Of course the finale was the Ike and Tina Turner Revue. While it couldn't be classified as jazz, it was still quite a show coupled with an excellent band and 3 female dancers. Of course when you add to this appearance, singing and dancing of Tina and the blues guitar of Ike you've got a seething cauldron of raw animalistic musical happenings. As a matter of fact, I think it was somewhere in the middle of "Proud Mary", when Tina and her three cohorts were dancing wildly that the lights starting flashing rapidly psychedelic style and huge puffs of smoke started emanating from the front of the stage and I momentarily took leave of my senses, cast my pen and pad aside and tried to make a break for the bandstand, not knowing exactly what I had in mind. Fortunately I was restrained by a friend and managed to regain my composure for the remainder of the performance.

So that, folks, is how it went at the AJF, 1972. It was a combination of jazz, blues and sensationalism, the audience being dominated by Mr. B.B. King. In other words, it was a good festival but not a great festival. 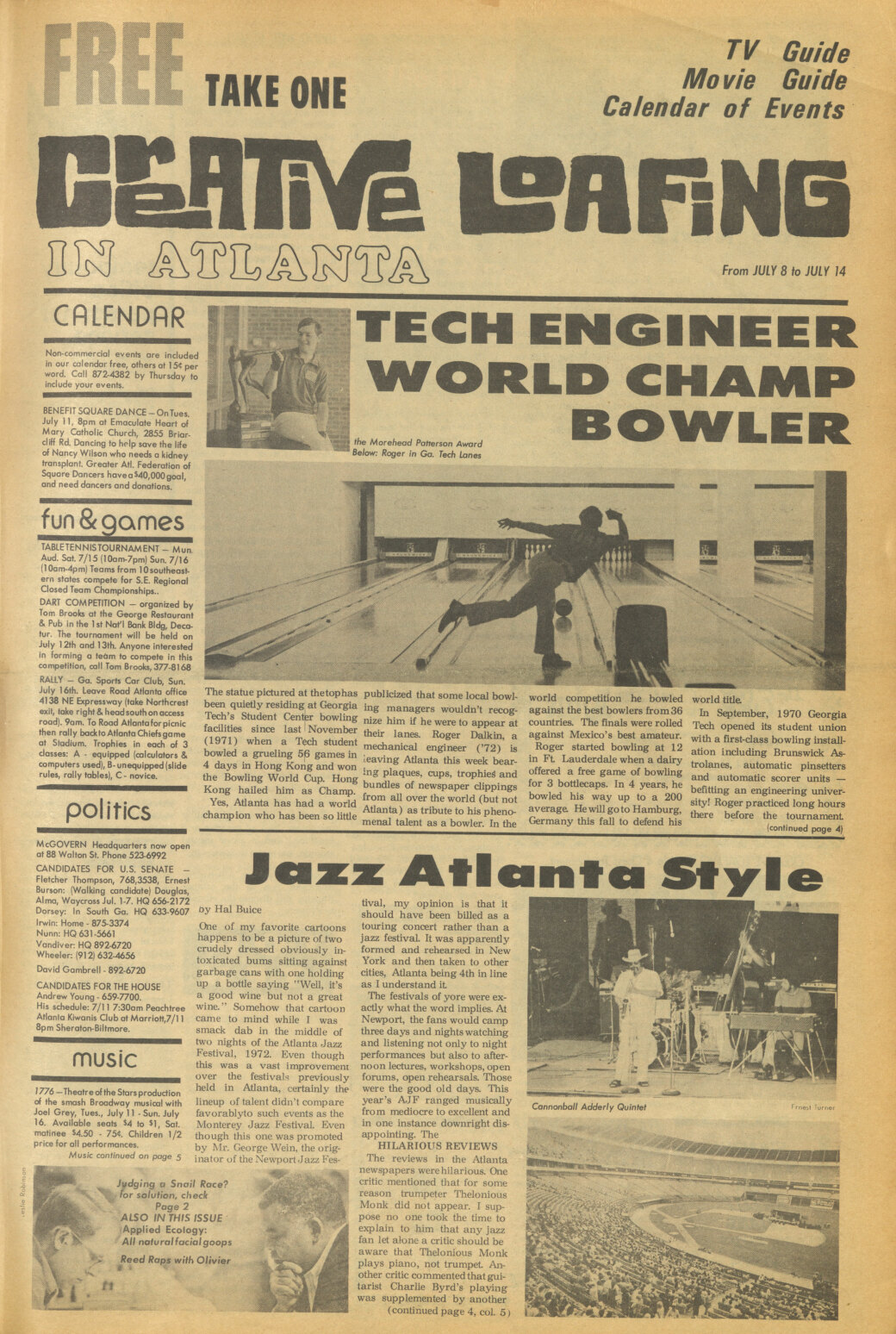