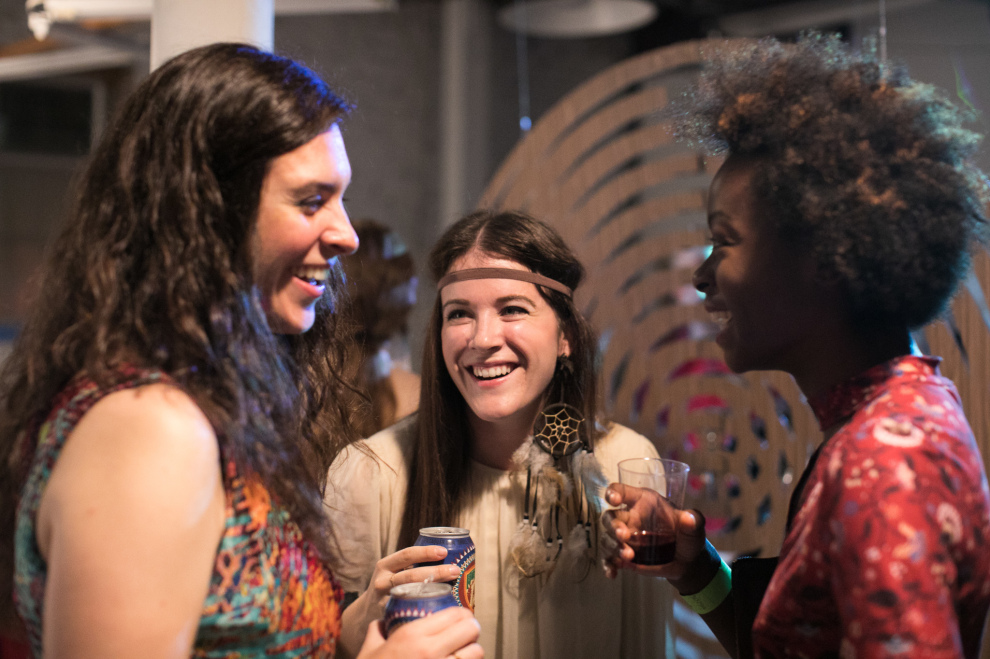 Open Studios spotlights the artists in our Studio Artist Program. This event is one of three nights a year where we invite you to join us and meet the artists, see their work firsthand, and perhaps add some art to your collection.


Who Will Be In Attendance


Open Studios supports our vision to build a community that offers ever-expanding support for the creation and appreciation of contemporary art. All are welcome to attend including artists, creatives, professionals, students, as well as anyone who is simply interested in art, cocktails, and connections.

What’s It All For


All ticket sales directly support the subsidization of each studio space. Sponsorships underwrite Atlanta Contemporary’s efforts to provide honoraria to many of the artists who exhibit in the galleries and project spaces within our campus.

This event works in conjunction with Contemporary Cocktails, featuring freshly mixed cocktails by our Mixologist-in-Residence, a DJ spinning tracks, as well as bites for sale. Cash/Credit.

Students - $5 (Available at the door)

Masud Ashley Olufani (MAO) is an Atlanta based actor and mixed media artist whose studio practice is rooted in the discipline of sculpture. He is a graduate of Arts High School in Newark, N.J., Morehouse College and The Savannah College of Art and Design where he earned an M.F.A. in sculpture in 2012.  Masud has exhibited his work in group and solo shows in Atlanta, Georgia; New Orleans; Louisiana; Chicago, Illinois; Richmond, Virginia; Lacoste, France; and Hong Kong, China.  The artist has completed residencies at The Vermont Studio Center; SCAD Alumni Artist in Residence in Savannah; The Hambidge Center for Arts and Sciences in Rabun, GA.; and Creative Currents in Portobello, Panama. He is a recipient of a 2015 Idea Capital Grant; a Southwest Airlines Art and Social Engagement grant; a recipient of 2015-16’ MOCA GA Working Artist Project Grant, and is a  member of the 2014-15’ class of the Walthall Fellows. He has appeared in numerous television shows including Being Mary Jane, Devious Maids, Satisfaction, and, Nashville, and will be a featured actor in the feature film All Eyez on Me: The Tupac Shakur Story.

Sonya Yong James is a sculptor and multi-media artist whose work for the past several years has focused on the exploration of the idea of physical devotion and ritual experienced through the process of repetitive labor intensive making. The sculptures utilize animal hair, including sheep wool and horse hair. Her current work is focused on the duality of form representing opposing sensations and active emotional tensions. This is shown by contrasting visual textures such as gentleness and violence, animal and human, and beauty and the abject. She is influenced by the landscapes of the South, personal narrative, and the history of mourning in America.

Known for incorporating the “glitch” aesthetic into the ceramic vernacular, A-Johnson’s work addresses thoughts of memory, technological integration, mark making, and perceptual consciousness. While his original draw to the ceramic medium was the physical nature in which it is manipulated, during Graduate school at Arizona State University, He found clay to be a relevant medium to explore the relationship of illusion and form, thought and physicality. A-Johnson has continued the exploration of these ideas and processes through multiple relocations, including time spent as a visiting artist at the College of Creative Studies in Detroit, and an Assistant Professor at Buffalo State College. He most recently transitioned from being a full time studio artist in Copenhagen, Denmark to join Georgia State University, Atlanta, GA as an Assistant Professor. A-Johnson’s work has been recognized nationally and internationally through awarded grants, exhibitions, and residencies. In 2012 he was awarded the Emerging Artist Award through NCECA, and most recently received an exhibition grant from the Danish Cultural Ministry to complete a residency and exhibition opportunity through C.R.E.T.A. Rome. For this opportunity he continued to integrate digital processes with traditional forming and surface treatments. This act reflects the current state of human experience, as we navigate between actuality and the illusions presented by our screens.

Kirstin Mitchell is a multi-media artist living in Atlanta, Georgia. Mitchell creates experiential environments in various mediums including, painting, installation and performance. Her work has been shown throughout the East Coast and Internationally, in Austria and Italy. Mitchell is a recent MOCA GA Working Artist Project Fellow. She has performed with the support of the Franklin Furnace Fund in Manhattan, New York. Mitchell’s work has been featured in publications including Art in America, Art Papers and Flash Art magazines.

Greene uses a diverse photographic practice to explore representations of race.  Greene is currently working on a new body of work that uses African textiles as a material and pattern to explore her own relationship to culture. She received an Illinois Arts Council Fellowship in Photography and has completed residencies at Light Work in Syracuse New York and the Center for Photography at Woodstock. Her work is in the permanent collection of Museum of Contemporary Photography in Chicago, Museum of Fine Arts in Houston, The National Gallery of Art in Washington D.C., the Nelson-Atkins Museum of Art, Kansas City, and the Princeton University Art Museum.  Myra Greene’s work has been featured in nationally exhibitions in galleries and museums including The New York Public Library, Duke Center for Documentary Studies, Williams College Museum of Art, Spelman College Museum of Fine Art in Atlanta, Museum of  the African Diaspora in San Francisco, and Sculpture Center in New York City. Myra Greene was born in New York City and received her B.F.A. from Washington University in St. Louis and her M.F.A. in photography from the University of New Mexico. She currently resides in Atlanta Georgia, where she is an Associate Professor of Photography at Spelman College.

MaDora Frey’s sculptural paintings describe the territory that exists between waking thought and the physical world. Frey juxtaposes contrasting elements as a metaphor for the dynamic between the tangible and ethereal. Materials with a strong physical presence, such as wood and paint, are paired with those that possess spiritual or even mystical associations, such as mirrors and light. Whether one interprets the work as object, portal, painting, or perhaps “artifact” from the future, the effect is one of visual complexity and wonderment. In coupling real with illusory space, the work evokes the uncanny sense of inhabiting two places at once, without being fully present in either.

Sara Hornbacher is a pioneer of video art and digital imaging. After receiving an undergraduate degree in Fine Art, she completed at Masters Degree at SUNY Buffalo where she studied video with the Vasulkas at the Center for Media Study. Hornbacher was Guest editor of the first CAA ART JOURNAL issue on Video in 1985. She completed her first residency at the Experimental TV Center in 1976 and her annual residencies at ETC continued through 2011. Her annual Signal Culture residencies began in 2014 and continue in 2018 The artist’s single-channel video works and multi-media installations have been exhibited throughout the USA, Europe, Australia, and Japan, including MOMA, PS1,The Whitney Museum Art, The Kitchen, Postmasters and New Math Gallery, The Bronx Museum for the Arts in NY, MOCA/GA , the Fay Gold Gallery, and The Atlanta Contemporary Art Center where she mounted a large-scale interactive installation environment, “A Thousand Plateaus” in 2001. She  is currently a Studio Artist at The Contemporary. Hornbacher has received numerous grants and awards including a 1985 Media Production grant from NYSCA and The Mayor’s Fellowship in the Arts from the Atlanta Bureau of Cultural Affairs in 2000. ”Transfigured Time”, a 40’ photomural composed of 128 portraits of Atlantans was commissioned for Course E at Hartsfield-Jackson Airport. In 2012, she became a Legacy Artist at The Burchfield Penney Art Center in Buffalo, NY and her video work is being archived at the Rose Goldsen Archive at Cornell University in Ithaca, NY.

Jaime Keiter is an artist working primarily in the medium of ceramics. She graduated with a BFA from the University of Georgia in 2001 and worked as a photo art director at various fashion and design magazines in New York City for 14 years before returning to Atlanta in 2016. Her ceramic sculptures are collaged from individually handcrafted and glazed porcelain tiles. Her process begins with cutting geometric and organic shapes from porcelain slabs, underglazing patterns and textures, and then finishing each tile with a variety of different mid-fire glazes including copper washes, turquoise, creamy pastels, and bold primaries. These elements are then collaged together to create the sculptures. The works are inspired by the Bauhaus art of 1920’s Pre-War Germany and the Postmodern Memphis design movement of the 1980’s. She is interested in the intersection both of these movements have between fine art and craft that combine to make functional and non-functional design objects. She has exhibited with Daily Operation in Brooklyn, New York as well as Swan Coach House in Atlanta. Her art has been featured in various publications including Sight Unseen, Design Milk, and Architectural Digest.

JD Walsh is a multimedia artist. He has exhibited at galleries internationally including Halsey McKay, Cleopatra’s, 106 Green, Brennan & Griffin, and Nicole Klagsbrun in New York, Galerie Steinek in Vienna, and Cooper Cole in Toronto. In 2012 his public art installation “Ensemble for Mixed Use” was commissioned by the City of Toronto for the 2012 Nuit Blanche festival. His work has been written about in Artforum, Flash Art, and Sculpture Magazine, among others. His ongoing music project Shy Layers has garnered critical acclaim and was listed as one of the top 20 electronic albums of 2016 by Pitchfork. Walsh is interested in tuning, perception, framing devices, context, serialism, thought-mirrors, rhythm, time signatures, appropriation, shapeshifters, random number generators, echoes, hallucinations, compresssion, phases, castoffs, generative art, John Cage, texture, thresholds, and visual crossfades.

Brotherton’s Killskreen paintings use the cast-off shapes and spaces from `80s video games as points of depar- ture into abstraction. 8-bit players who were good could blast though enough levels to exceed the arcade game’s memory, resulting in a frozen, glitched “kill screen.” This tableau, so charged, becomes the zone for Brotherton to push the limits of oil and acrylic paint, glitter and terrycloth.

Erin Jane Nelson received her BFA from The Cooper Union School of Art, New York in 2011 and has also studied at Malmö Art Academy, Sweden. Recent exhibitions include Between the Waters at The Whitney Museum of American Art, Photography Today: Public and Private Relations at the Pinakothek der Moderne, and Psychopompopolis at DOCUMENT Gallery. Her work typically combines photography with non-traditional substrates like ceramics or textiles to create sculptural collages. Recent bodies of work have used speculative fiction and documentary photography to address the psychological, sociopolitical, and regionally imbalanced effects of climate change.

Mike Stasny is an installation artist, performance artist, and sculptor from the midwest currently working out of Atlanta. He primarily works with raw building materials and broken furniture converting them into “creatures” inspired by natural history museums, sci-fi, and his grandfather - an eccentric taxidermist whom let Mike play in his basement with numerous dead things. His most notorious work to date is “what what in the butt” - a youtube viral video that conflates homosexuality, blackness, and religion into an absurd / escapist cartoon like universe. On occasion, he provides “MUSIC YOU NEED” for art related events. 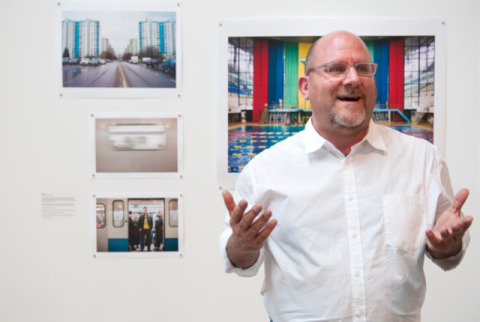