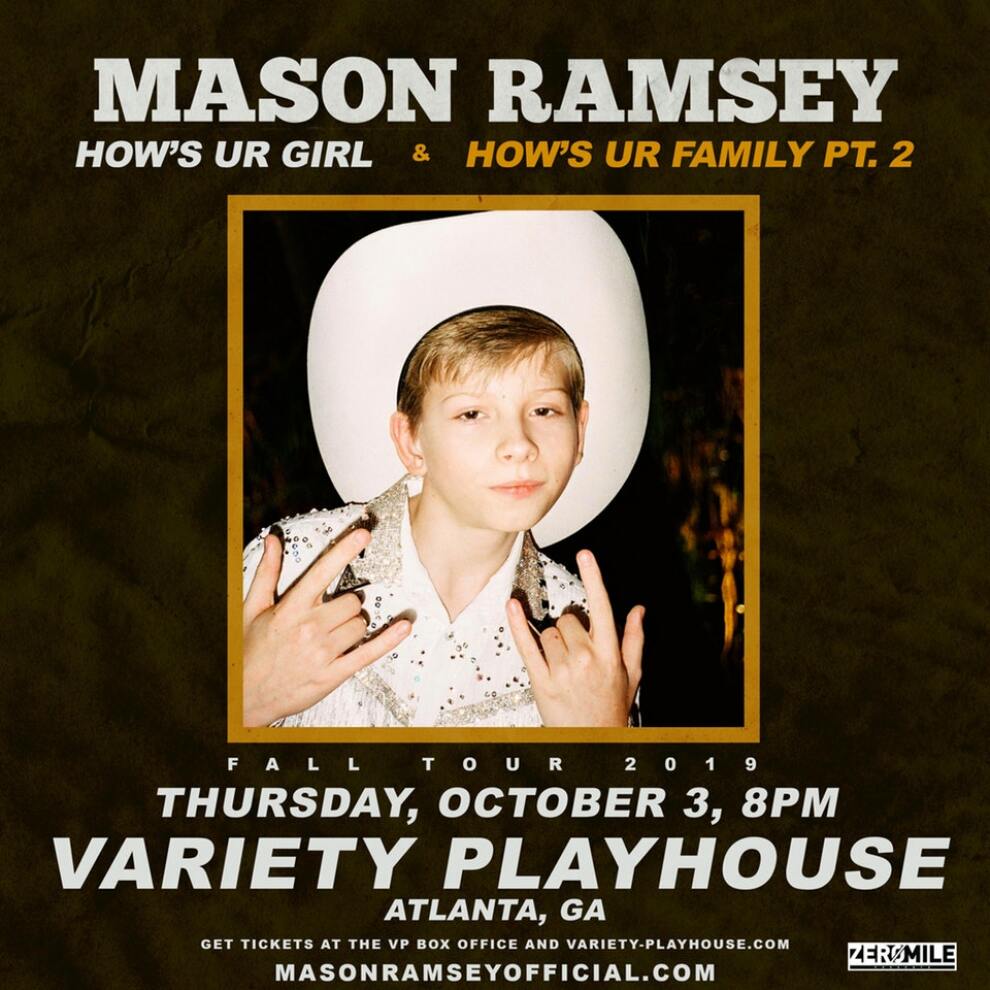 Courtesy of Variety Playhouse
Cost: $18-$27
Mason Ramsey is a 12 year old country artist signed to Big Loud and Atlantic Records. He was discovered in April of 2018 when a video of him singing Hank William’s “Love Sick Blues” went viral. Raised by his Grandparents, Mason is from Golconda, IL, which is a small town with a population of 700 people. Growing up without Internet, a cellphone or computers meant that a majority of his time was spent with his Grandpa Ernie learning about the history of Country music. With his guidance he learned to play guitar and start singing at the age of 4. Over the years Mason would travel and play wherever he could catch a crowd. Being from a town of 700, the best places to find them were nearby truck stops, church and the Walmart 45 minutes from their home. He eventually developed the nickname “The Singing Walmart Boy” around town. After a video of Mason yodeling went viral in April 2018, he has since then become one of the most viral and influential Country stars on social media today. He’s amassed 2.1 million followers on Instagram in a matter of 6 months which is more than some of the biggest Country stars today. His lead single 'Famous' has over 60 million total plays and is approaching to become a gold record. He made his Grand Ole Opry debut and has performed there 3 times. He has played at major festivals including Coachella, and Stagecoach. He has been invited and performed on numerous televisions shows such as Ellen, Good Morning America, and Today’s Show. Mason was apart of the legendary CMA Awards with hosts Brad Paisley and Carrie Underwood. He is currently touring with country star Chris Lane and has a Las Vegas residency with Florida Georgia Line at the Planet Hollywood in December 2018. Mason finishes off the year as the biggest stars of 2018. Making friends with the the likes of Shawn Mendes, Millie Bobby Brown, and other massive pop stars; Mason is definitely on his way to bringing the Country to the mainstream. Masons videos continue to go viral and sometimes approach 10-100 million views per video. The Internet has fallen in love with him as he has had one of the most breakout years of any entertainer in 2018. Mason recently moved just outside of Nashville. He spends most of his time playing shows, playing basketball, and writing with other Nashville writers. He is surrounded by an incredible family that supports him as he continues to develop as an artist and chase his dream of becoming … as he would put it… “the Steph Curry of Country Music”
More information